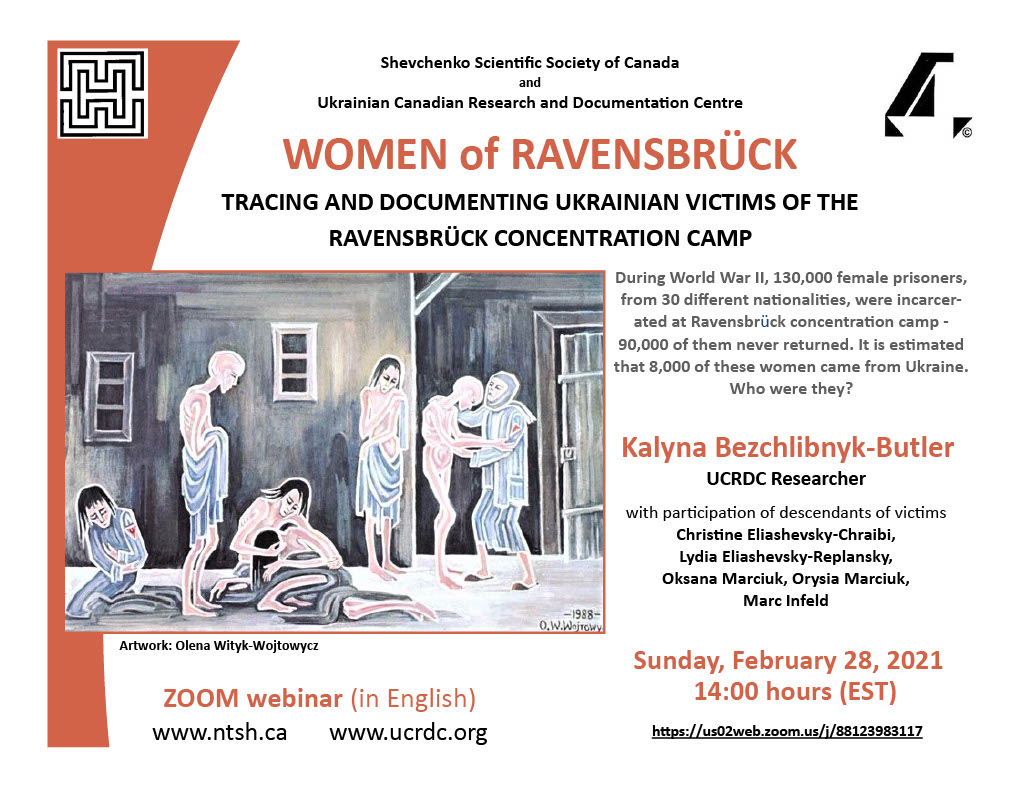 During World War II, 130,000 female prisoners from 30 different nationalities passed through the gates of Ravensbrück — up to 90,000 of them never walked back out. It is suggested, by some estimates, that up to 8000 of these women came from Ukrainian territories.

The purpose of the Ravensbrück Project, at the UCRDC, was to search and document Ukrainian women who were incarcerated at Ravensbrück. UCRDC is fortunate to have, on file, oral histories of several women who were imprisoned for their involvement in anti-Nazi activities during the war. These women, in turn, provided the names of other Ukrainians they met at Ravensbrück – and the project took off from there.

With the help of the internet as well as librarians (Natalia Barykina at the Petro Jacyk Resource Centre at the Robarts Library, University of Toronto, and Anna Skorupsky at the Ekstein Holocaust Resource Library in Toronto) books, articles, monographs and databases were searched for women who were either specifically identified as Ukrainian or who were documented as born within the ‘accepted’ boundaries of Ukraine. The listing of many of these women, in German documents, as Russian or Polish made the project challenging, and place of birth was not always available.

The project contains the names of around 4000 Ukrainians from different walks of life: some were political activists involved in groups such as the Organization of Ukrainian Nationalists (OUN), others were students studying in Germany or Austria; there were women taken as forced labour to work in different German enterprises (Ostarbeiter), some were taken because they were Jewish, or Jehovah Witnesses, and others because they were captured as soldiers in the Soviet Union Red Army.

Where possible, I tried to obtain as much biographical information as possible for each individual, including place of birth, date of incarceration, concentration camp number, category of prisoner, and disposition. The intention was to identify, recognize, and document the many Ukrainian women who had suffered (and many died), at the hands of the Nazi regime, as prisoners at the Ravensbrück concentration camp.

The number of Jewish prisoners was relatively small in relation to other nationalities (about 15%). The largest group was Polish (30%); next, Russian and Ukrainian (21-30%); followed by German and Austrian (18%); Hungarian, including Roma and Sinti Gypsies (8%); French (7%); Belgian, Swedish and Danish women, as well as some 12 British women.

Ukrainians came under the umbrella of political prisoners and all wore the RED triangle on their uniforms, plus an initial for nationality. ‘U’ = Ukrainians was rarely used as there was no Ukrainian state during the War; most Ukrainians from western Ukraine region were listed as Polish (‘P’), and those from central and eastern Ukraine as Russians (‘R’) and from Zakarpattia listed as Czechs or Hungarians. ‘SU’ = Soviet Union was worn by women in the Red Army (medics, doctors, etc – they included some Ukrainians)

On Sunday February 28th at 14:00 hours (EST), the UCRDC, and The Shevchenko Scientific Society of Canada, will be sponsoring a presentation entitled WOMEN OF RAVENSBRÜCK; TRACING AND DOCUMENTING UKRAINIAN VICTIMS OF THE RAVENSBRÜCK CONCENTRATION CAMP. Following a description and short video of Ravensbrück camp, the challenges in identifying and categorizing Ukrainian prisoners will be highlighted. Descendants of 3 former prisoners will then provide personal stories of their mothers’ incarcerations at the camp. The link to the presentation is: https://us02web.zoom.us/j/88123983117

The DATABASE of names of Ukrainian women incarcerated at the camp, and reference sources, will be available on the UCRDC website prior to the Webinar presentation. (www.ucrdc.org)