In November 2019, when the delegates of the XXVI Triennial Congress of Ukrainian Canadian Congress gathered in Ottawa, none of them could have imagined the challenges that the next three years would bring, said UCC President Alexandra Chyczij while opening the XXVII Congress on October 28 in Winnipeg. First, the COVID-19 pandemic and then the Russian all-out invasion of Ukraine changed the world and the lives of Ukrainian Canadians.

The XXVII Triennial Congress proceeded in a solemn and business-like atmosphere and mainly focused on UCC’s two major missions: helping Ukraine and assisting Ukrainians who are coming to Canada in time of war. The theme of this year’s Congress, Stronger Together – В Єдності Сила – Tous ensemble, is a reflection of the work Ukrainian Canadians have done since the beginning of Russia’s full-scale war against Ukraine.

This theme was also reflected in the participation of an unprecedented number of federal, provincial and municipal government officials in the Congress. Prime Minister Justin Trudeau, Deputy Prime Minister Chrystia Freeland, Minister of National Defence Anita Anand, Minister of International Development Harjit Sajjan and MP for Selkirk-Interlake-Eastman James Bezan spoke and made announcements and proposals during the Congress. Premier of Manitoba Heather Stefanson and Mayor-elect of Winnipeg Scott Gillingham also had their time at the Congress and spoke about their efforts and plans to assist Ukrainians who are coming to Manitoba. Ambassador of Canada to Ukraine Larisa Galadza and Ambassador of Ukraine to Canada Yuliya Kovaliv participated in the discussions, panels and workshops at the Congress.

Ukraine’s First Lady Olena Zelenska, Minister of Foreign Affairs of Ukraine Dmytro Kuleba and Minister of Defence Oleksiy Reznikov addressed the Congress by video and were greeted with standing ovations.

At the very beginning of the Congress, on Friday morning, Prime Minister Trudeau in his opening address announced sanctions against nearly three dozen more Russians involved in the aggression including leaders of the Russian state-owned energy company Gazprom and six energy sector entities. 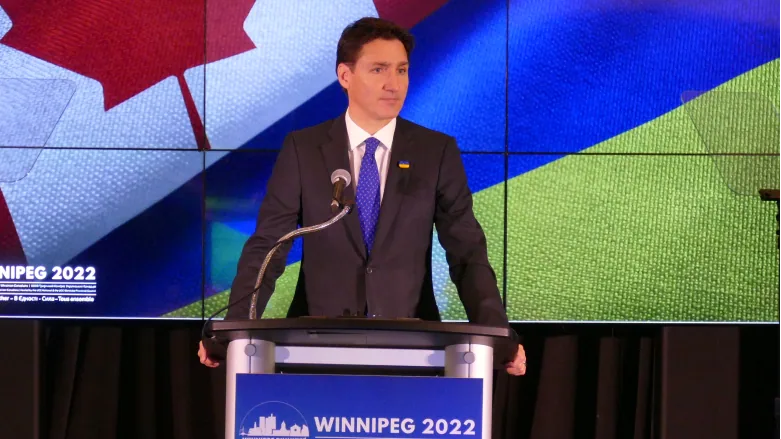 Trudeau also announced the launch of Ukraine Sovereignty Bonds. The bonds will help the Ukrainian government continue operations, including providing essential services to Ukrainians, like pensions and purchasing fuel before winter. The proceeds from this five-year bond will be channelled directly to Ukraine through the International Monetary Fund’s Administered Account. Finance Minister Chrystia Freeland said that there is currently no cap on the amount of money that can be raised through these bonds, which will be open to Canadian institutional and retail investors as well as non-Canadian financial institutions. Many speakers at the Congress called on Ukrainian Canadians to buy the bonds to help exceed the announced initial amount of $500 million. This will build on the Government of Canada’s over $2 billion in financial assistance to Ukraine this year through bilateral loans and loans through the IMF.

Defence Minister Anita Anand spoke about Canada’s military support for Ukraine. Since the beginning of the Russian offensive in February, Canada has sent more than $620 million in military aid and equipment to Ukraine, including tech like cameras for drones and armoured vehicles to transport personnel to and from the front lines. Canada is also leading training missions in the United Kingdom and Poland and preparing to send 500,000 pieces of winter clothing, howitzers and antitank artillery for the Ukrainian armed forces. Other essential items such as blankets, heating appliances and fuel are also being sent.

On Saturday, Minister of International Development Harjit Sajjan spoke about his recent visit to Ukraine together with the MP for Etobicoke Centre and head of Canada Ukraine Parliamentary Group Yvan Baker, and about Canada’s efforts to help Ukraine weather the coming winter despite the destructions of the infrastructure caused by the Russian missile attacks.

Manitoba Premier Heather Stefanson also addressed the Congress and noted that UCC’s inaugural triennial congress was held in Winnipeg in 1940 — at that time, against the backdrop of the Second World War. “In the current brutal war of aggression against Ukraine, Manitoba is there again for the Ukrainian-Canadian community,” she said, calling the current war “a deadly, dark European stain of tragedy and … unimaginable loss.”

She informed how the provincial government and many Manitobans have risen to the occasion and helped those coming to Manitoba which is now considered among the most welcoming destinations for Ukrainian newcomers. “While one in seven Manitobans are of Ukrainian descent, we are all Ukrainians during this terrible, terrible time,” said Stefanson.

At the Congress, the delegates participated in a number of panels and workshops covering such issues as the future of Ukrainian education in Canada, the Ukrainian culture, best practices for community leadership and for non-profit governance, meeting the needs of displaced Ukrainians, building fundraising capacity, disinformation in the Russian war on Ukraine, Ukrainian humanitarian and health sector.

On Sunday, the delegates adopted The Triennial Congress’ resolutions and unanimously re-elected Alexandra Chyczij as National President for a second term.

Following the conclusion of the Congress, a delegation of the UCC paid their tribute to the Taras Shevchenko, the Internment and the Holodomor monuments at the Manitoba Legislature grounds. 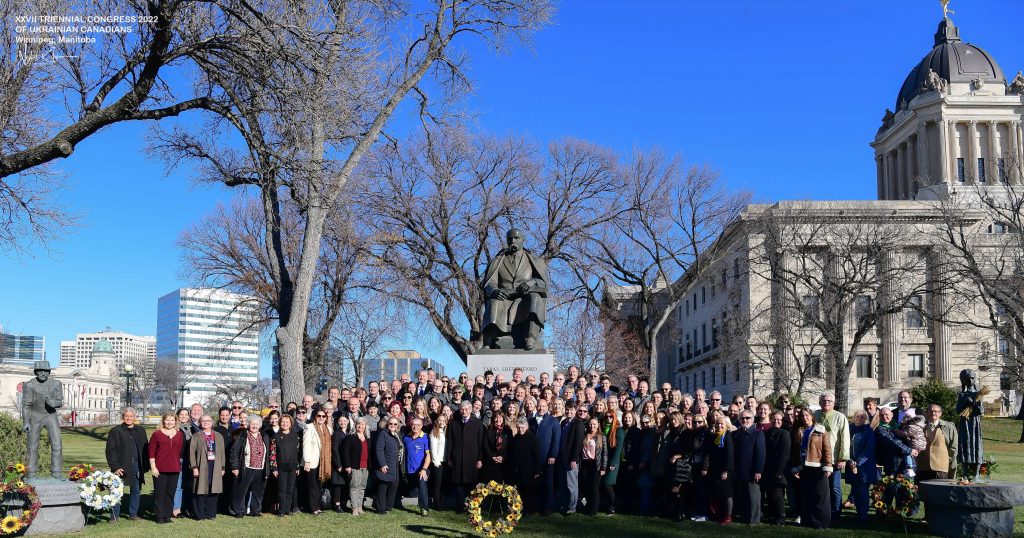