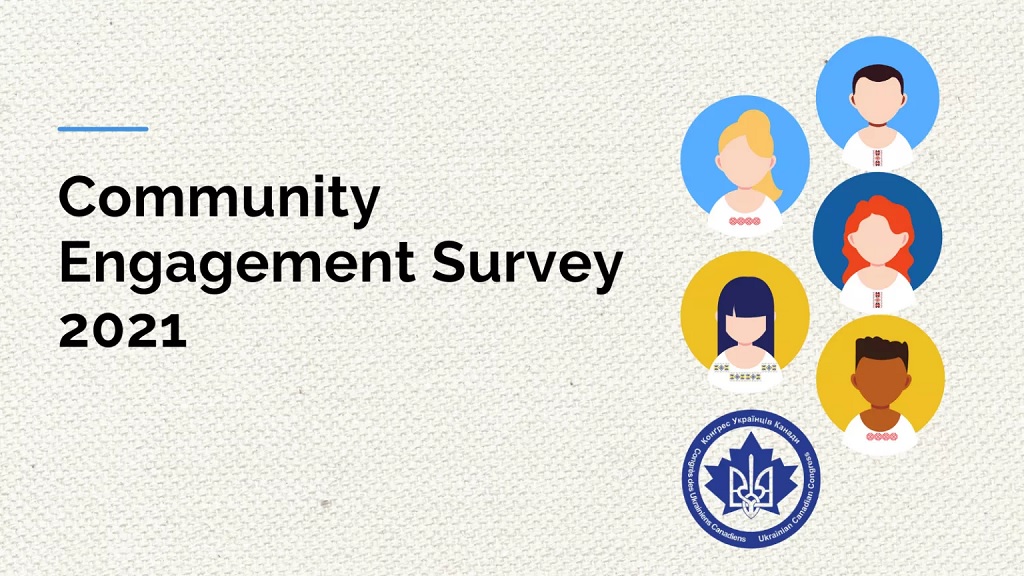 “Ukrainian Canadians are marked by different experiences, consciousness, motivations, and interests. Yet, at the same time, Ukrainian Canadians continue to be one of the most cohesive ethnolinguistic groups in Canada,” said the official Report. “There is a glue that bonds these different generations and different experiential groups together. Exploring and defining that bond – and assessing how it is evolving – was a key motivation for conducting the present research.”

Although the 2016 Canadian census showed that Canada homes the world’s third largest Ukrainian community, comprising of 1,359,655 Ukrainian Canadians, these statistics provide little insight into the Ukrainian experience in Canada and how it is changing with the ongoing influx of newcomers from Ukraine.

An important objective of the UCC’s survey was to identify motivating factors for staying connected to the community, as well as obstacles to participation and inclusion. The survey revealed that Ukrainian community in Canada has strong connection to Ukrainian history and culture, as well as to local organizations and causes.

“What emerges is a thriving Ukrainian Canadian presence across the country that spans generations and does not reside solely in those who have recently arrived,” the report said.

The following are the main findings of the Survey.

Two-thirds of the participants surveyed said their Ukrainian Canadian identity is a very important part of their life.

Many survey participants indicated that this identity shapes their personal values, such as a strong work ethic, respect for others and hospitality. Moreover, this connection to one’s roots extends to Ukrainian Canadians who are not actively involved with the local community and to those whose family has been in Canada for several generations.

Participants identified a number of attributes that define what it means to be Ukrainian Canadian, for example caring or knowing about the history and experience of Ukrainians in Canada, caring about Ukraine, celebrating Ukrainian holidays, and having Ukrainian ancestry.

“Among different types of Ukrainian experiences for oneself and one’s family, celebrating Ukrainian holidays and upholding traditions and customs are at the top of the list,” the Report said.

Identity often evolves over a lifetime, and half of the participants surveyed said their Ukrainian identity has changed in some way over the past 10 to 20 years.

“This group is almost twice as likely to say their identity has strengthened rather than weakened over this time span, and a stronger identity is most commonly reported by those who are English speakers, third plus generation Canadians, or ages 18 to 23,” said the Report.

About half of the participants surveyed have had some form of formal Ukrainian education, either in the public or Catholic school system, or through evening and weekend programs. This experience is most predominant among second generation Canadians and those who were part of the third or Polish immigration waves.
“Ukrainian school experience in Canada likely plays a role in the formation of identity, as this type of education is least likely to be reported among those who place low importance on their Ukrainian identity,” the Report said.

Among parents, just over half reported that one or more of their children have attended (or are attending) a Ukrainian school or evening/weekend program. Parents who themselves have a Ukrainian educational background are three times as likely as others to be providing this experience for their children.

The Ukrainian language continues to have a strong presence in Canada but is not the predominant one used in most homes.

“Among those surveyed, six in ten identify Ukrainian as their mother tongue, but seven in ten report that English is the main language spoken in their household,” the Report said.

Ukrainian as mother tongue is most commonly found among residents of Quebec and Toronto, first generation Canadians, and those who were part of the most recent immigration waves.

Many members of the Ukrainian Canadian community maintain a strong personal connection to the home country.

“[Three-quarters of those surveyed] Ukrainian Canadians feel a strong connection to their homeland of Ukraine, with a majority of those surveyed visiting the country one or more times, and keeping up with news on a regular basis. Attachment to Ukraine is strongest among those who have most recently arrived in Canada,” the Report said.

Connections to Ukraine include time spent in the country: among those not born in Ukraine, six in ten have visited the country at least once, and almost half of this group have done so three or more times. Multiple trips to Ukraine were most widely reported by second generation Canadians and those who were part of the third or Polish immigration waves.

About half of those surveyed follow the news on a daily or weekly basis, with others doing so monthly or at least a few times a year. Not surprisingly, it is those who are most recently settled in Canada (part of the fourth and fifth immigration waves) who are most apt to pay regular attention to what is happening in Ukraine.

Sense of connection to the Ukrainian Canadian community

“A strong connection is most widely expressed by those who were part of the third or Polish immigration waves, and least so among those who are third plus generation Canadians,” the Report said.

Reasons for not having a strong connection to the local community fall into one of two distinct themes: out of a personal preference/current situation or not knowing people, not finding programs or activities they like.

“[This] speaks more directly to issues with the local community and one’s ability to connect with it,” the Report said.

Moreover, two-thirds of survey participants expressed some if not strong interest in strengthening their connection to the local Ukrainian Canadian community. Such interest was most evident among those who already feel a strong sense of connection.

For one in five participants, language fluency represents an obstacle to membership and inclusion in the local community. This is most likely to be an issue for those whose mother tongue is English who feel they do not have sufficient fluency or comprehension of Ukrainian. By comparison, very few Ukrainian speakers say they have issues understanding English.

Involvement in the Ukrainian community through community life, volunteering and philanthropy

Among survey participants, sixty per cent reported being an active member of a Ukrainian Canadian organization or charity, with another small proportion having done so prior to this period.

“Six in ten survey participants have been active members in Ukrainian organizations and charities in the past five years. Others have not done so because they lack the time or due to other commitments, but some cite barriers related to the community itself, such as not feeling welcome,” the Report said.

Among the most active members of the community are those with a strong Ukrainian identity, those who have Ukrainian as their mother tongue, or who are part of the third or Polish immigration waves. Those who are not active members cited reasons due to personal issues (other priorities, lack of time) or the absence of a local Ukrainian community. Others mentioned issues related to the community, such as not feeling welcome or the absence of causes they care about.

Ukrainian Canadians have also been active in volunteering in their local community.

“More than half of those surveyed report having engaged in this type of activity to support Ukrainian Canadian organizations or charities over the past five years, with about half of this group doing so on a regular basis (at least monthly),” the Report said.

Volunteers are most likely to be motivated by contributing to their community and supporting a cause they care about, and much less so by realizing such personal benefits as using their skills, making personal connections, improving job opportunities, or being recognized for their contributions.

The survey also explored the barriers to volunteering with the Ukrainian Canadian community. Those who at one point considered such volunteer work and chose not to proceed (comprising one in four survey participants) tended to give reasons unrelated to the community, such as a lack of time, other priorities, or an inability to make a longer-term commitment that may have been required. But a significant proportion of this group also identified obstacles connected to the organizations they considered, including not feeling welcome, not knowing how to get involved, having had a previous bad experience, or because no one asked them.

Perspectives on the future

Survey participants emphasized greater development of arts, culture and folk programs, followed by programs for children and youth, and Ukrainian language education as the most important priorities for the Ukrainian Canadian community.

“The emphasis given to the arts and culture is at the top for most groups, but especially among women, those whose mother tongue is English and those who are third plus generation,” the Report said. “Ukrainian speakers are most likely to place importance on programs for children and youth, as well as Ukrainian language education, while support for newcomers is most apt to be a priority among first generation Canadians.”

When asked to express their hopes for what the Ukrainian Canadian community will be like in 10 years time, survey participants identified a number of changes or aspirations. Most prominent among them was a community that is growing in size and becoming stronger, one that celebrates culture, is more accepting and inclusive, and is active and dynamic.

“Thank you to everyone who took the time to share their background, experiences, and opinions to inform our understanding of what it means to be Ukrainian in Canada today. This important research will help us shape a strategic vision to keep our community effective, inclusive and growing,” said Alexandra Chyczij, National President of the UCC. “The UCC is proud to represent a diverse community that at the same time is united by core values, a strong identity, and a commitment to volunteerism.”

The UCC will be working with its member organizations, provincial councils and local branches to develop programs and initiatives that reflect the priorities identified in the survey.

The Ukrainian Canadian Congress conducted this study in partnership with The UCC Charitable & Education Trust and The Temerty Foundation.