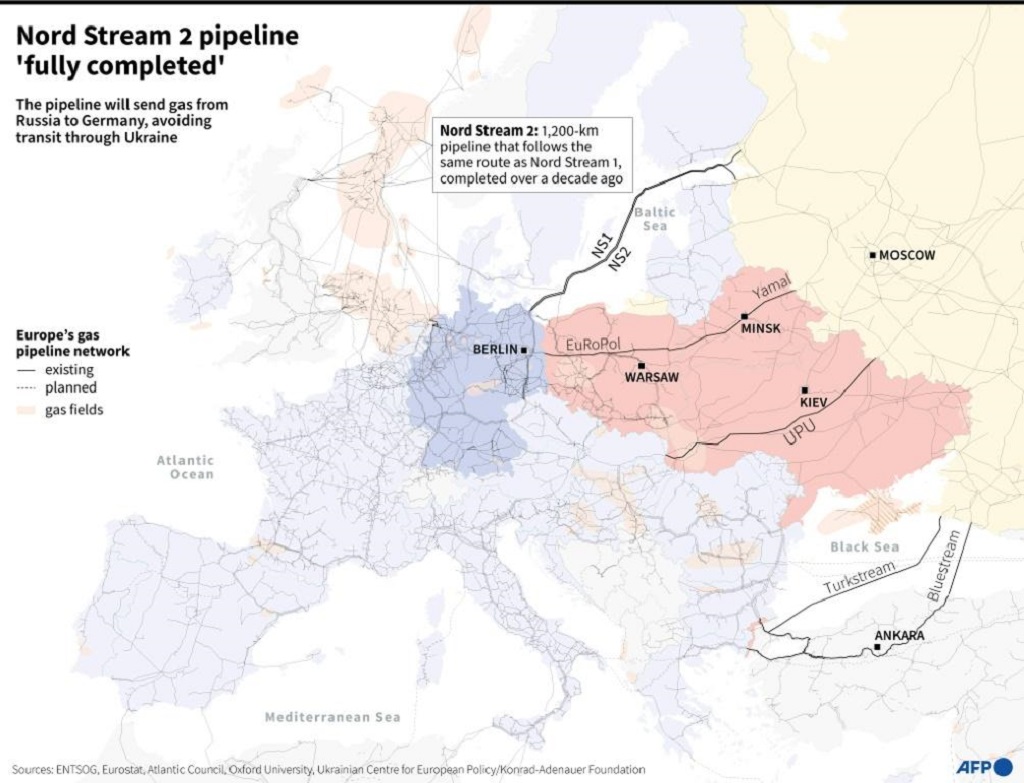 Zelenskyy not getting the support he needs from Biden

September 14 a group of bipartisan lawmakers passed an amendment which seeks to undo U.S. President Joe Biden’s decision to waive sanctions on the Russian-owned operator of the Nord Stream 2 pipeline in a last-ditch effort to stop it from pumping gas to Europe.

The amendment, which was introduced by Representatives Michael McCaul (Republican-Texas), Marcy Kaptur (Democrat-Ohio) and about eight other lawmakers, orders the president to impose sanctions on any entity responsible for the planning, construction or operation of the Nord Stream 2 pipeline. It also authorizes new mandatory sanctions on foreign entities and individuals responsible for the planning, construction and operation of Nord Stream 2.

Although Russia’s majority state-owned energy behemoth Gazprom announced completion of the pipeline on September 10, Germany’s energy regulator, the Bundesnetzagentur, has up to four months to award an operating license to Nord Stream 2, which must comply with European unbundling rules that require the owners of pipelines to be different from the suppliers of the gas that flows in them to ensure fair competition. That leaves some hope for opponents of the pipeline. The operator of the pipeline, Nord Stream 2 AG, is majority owned by Gazprom whose Western partners in the project are Germany’s Uniper, BASF’s Wintershall Dea, Anglo-Dutch oil major Shell, Austria’s OMV and French energy company Engie.

Critics say Nord Stream 2 is designed to deprive Ukraine of lucrative transit fees and will further strengthen Russia’s influence over Europe’s energy industry. Ukraine and Poland vehemently oppose the project on the grounds that it is a national security threat, while Germany has steadfastly supported it. The U.S. Congress has sided with Kyiv and Warsaw, imposing two rounds of mandatory sanctions to stop its completion.

Back in April Anders Aslund, a Senior Fellow at the Atlantic Council, published a comprehensive analysis of the Nord Stream 2 (NS2) project in which he detailed the principal concerns. Among the highlights:

• National Security. Both the Ukrainian transit line and the Belarusian-Polish gas pipeline are likely to be abandoned. That would give Russia a freer hand for military actions in Ukraine and Belarus. Major Russian military aggression in Ukraine or Belarus would endanger the national security of Europe.

• Europe’s Energy Security would be seriously undermined by the pipeline’s completion. Given that Gazprom is notorious for cutting off gas supplies in the middle of the winter, this is an impermissible energy security risk.

• The Geopolitical Effect of the completion could be devastating. Russia’s obvious intention has been to form an alliance with Germany and Austria (also with the Netherlands and Belgium) against Eastern and Northern Europe. NS2 is Russia’s most daring attempt to break up the EU.

• European Energy Policy. NS2 violates the market-oriented EU energy policy, which requires complete unbundling of pipelines and gas production. In the instant case, Gazprom is both the producer and supplier of the gas being carried by NS2 as well as the majority owner of the pipeline transporting that commodity. Gazprom has all along opposed the EU policy of unbundling and marketization, preferring long-term contracts of take-or-pay over decades, and of course its monopolization of the market.

• Governance. NS2 has had a corrosive impact on governance in Germany, Austria and the Netherlands, all of which have been tainted at the highest levels by corruption that can be traced back to conduct initiated or sponsored by Gazprom and Russia. To take but one example, the chief executive officer (CEO) of Nord Stream AG, Matthias Warnig, is Putin’s old friend from the East German secret police (Stasi) in Dresden.

Aslund concluded his analysis of NS2 with the observation that since Russian gas supplies to Europe are unlikely to increase, there is no need for more gas pipelines from Russia to Europe. “NS2 serves two aims—geopolitics and dubious business interests. Neither is acceptable. The geopolitical aim is to facilitate Russian military actions in Ukraine and Belarus, to cut off Germany politically from the EU and the United States, and to corrupt important leading voices, especially members of the German and Austrian elite.”

What is most surprising is that until his decision to lift the sanctions against Nord Stream 2 AG, one of its biggest critics was Biden himself. He called Nord Stream 2 “a bad deal — for Germany, for Ukraine and for our Central and Eastern European allies and partners”. And just one day before Biden’s announcement, his own Secretary of State, Antony Blinken said “this pipeline is a Russian geopolitical project intended to divide Europe and weaken European energy security”, adding: “The Department reiterates its warning that any entity involved in the Nord Stream 2 pipeline risks U.S. sanctions and should immediately abandon work on the pipeline.”

So, what prompted Biden to change his mind? The consensus among most pundits is that he did this to repair relations with Germany after the tumultuous years of Donald Trump’s erratic foreign policy. Frankly, that explanation doesn’t hold any water. For one thing, the United States, as the world’s largest producer of natural gas, could easily meet much of Germany’s energy requirements itself with exports of liquefied natural gas (LNG). For another, what’s the logic in mending fences in relation to a project that Biden himself described as “a bad deal for Germany”? Third, and most important, it is difficult, if not impossible, to square the Biden Administration’s continued claim of “unwavering support” for Ukraine with the fact that easing the path to Russia’s completion of NS2 actually facilitates further Russian military aggression in Ukraine.

One may also question Biden’s sincerity when he gives the green light to a pipeline whose construction threatens global security, when he cancels a pipeline (Keystone XL) which not only provides an economic boost to the country that is supposed to be the United States’ closest ally (Canada), but also creates thousands of jobs in the United States itself?

While many Ukrainians greeted Biden as a welcome alternative to Trump, he has proved to be a major disappointment. Aside from Nord Stream, his decision to cancel the deployment of two warships to the Black Sea (after the Kremlin warned the United States to ‘stay away for their own good’), was a sign of weakness and gave Putin the chance to ramp up his military presence in Crimea and near the Ukrainian border.

And when Ukrainian President Volodymyr Zelenskyy finally got his visit to the White House, he came away disappointed. A joint statement prepared by the two made no mention of U.S. plans to directly participate in peace talks, something Zelenskyy has repeatedly asked for. The $60 million in military aid that was promised is just a drop in the bucket insofar as stopping Russian aggression is concerned. Biden also told Zelenskyy Ukraine is far from ready to join NATO as it needs many more reforms.

While it is true that Ukraine needs to take strong action in order to curb the endemic corruption that has plagued the country since independence, Zelenskyy faces an uphill battle with the oligarchs that have so much control. If he is to succeed in tackling this corruption, he needs strong support – from the United States in particular. And right now he is not getting it.