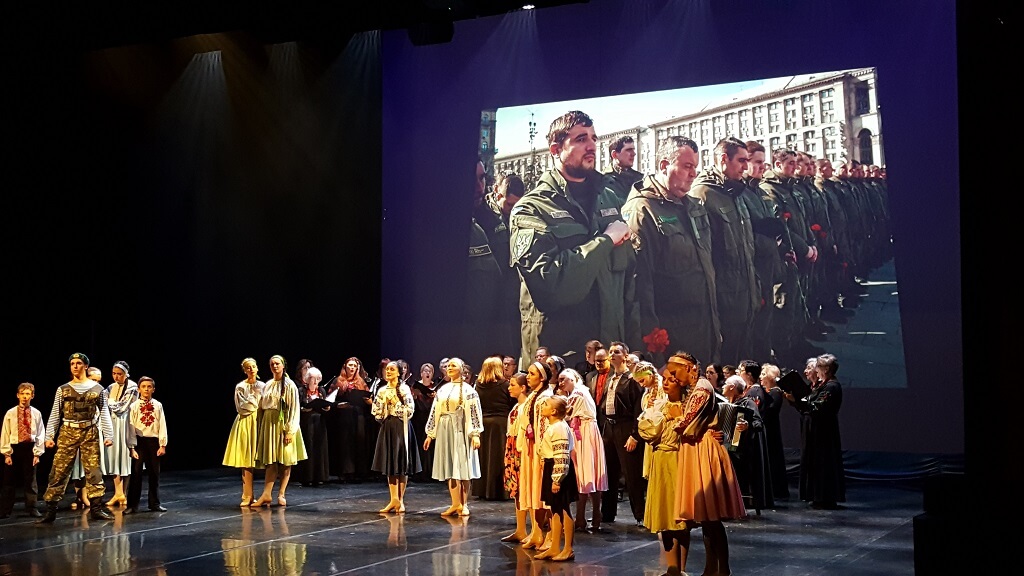 Calgary’s Tryzub Ukrainian Dance Ensemble teamed up with Edmonton’s Dnipro Choir and Shumka School of Ukrainian Dance to present an outstanding production of “Cлава Герoям – Glory to Heroes” at the Arden Theatre in St. Albert, Oct. 26/

The production consists of three acts, the first consisting of the opening “Pryvit”, or “Welcome” and the third act, which featured regional dances.

But it was the second act which established the foundation of the performance. With a script written by Artistic Director Shane Gibson it was a narrative that paid tribute to all those who in the past sacrificed, and, in the present are sacrificing, their lives for Ukraine’s freedom. As such, it is most timely and relevant today.

It begins with the Kupalo celebrations which lead to the romance between the two main characters, Petro and Iryna. But their love story is interrupted as Petro is conscripted into the army to fight the Russian invasion of Donbas.

It ends tragically as, during Easter celebrations, Iryna finds out from a friend of Petro’s that he has died on the battlefield and collapses with heartbreak. The act and the first half closes with a most moving rendition of Anatoliy Pashkevych’s immortal “Stepom, stepom”, performed by Dnipro Choir, conducted by Irene Szmihelsky, with soloist Peter Tarnawsky, accompanied by Symen Kostiuk on bayan (button accordion), against a backdrop screening of images from the war itself. As the images flash by and Dnipro sings, members of Tryzub and the Shumka School of dance come on stage an expressive tableau of mourning for the fallen heroes.

As Gibson explains, the inspiration for this show came from one of his travels to Ukraine.

“Every year for the past many years, I have travelled to Ukraine in an effort to gain the knowledge and teachings from the remaining regional Ukrainian dance ensembles while they still exist. As part of my travels, I have met many friends and dancers across Ukraine.

“In the summer of 2017, I began my Ukraine trip in Kyiv. I stayed at the Lybid Hotel where I encountered many injured soldiers who fought at the front in the Donbas area. Their stories and experiences we heart breaking. Later that summer, I learned that two friends I had met on an earlier trip to Ukraine, both who had volunteered to fight for Ukraine’s freedom, had died from a bombing one night.

“Weeks later, I was hired by the Tryzub Ukrainian Dance Ensemble. Still not home from Europe, I contemplated how I could reconcile my new opportunity as Artistic Director with the grief I have been dealing with as a result of the terrible news of my friends. I sat at a café and began to write, the concept and show seemed to write itself. I think that is the responsibility of Ukrainian diaspora to remember that the families we left behind in Ukraine have been facing numerous challenges. It is very easy to be a Ukrainian living in Canada,” he says.

Tryzub had earlier performed this show in Kelowna, BC and Winnipeg. In Kelowna they teamed up with the Korinnya Choir of Calgary and in Winnipeg with that city’s Koshetz Choir. They are planning a Saskatoon performance in the New Year.