“This togetherness like we have in the show, this is what we need in the world” 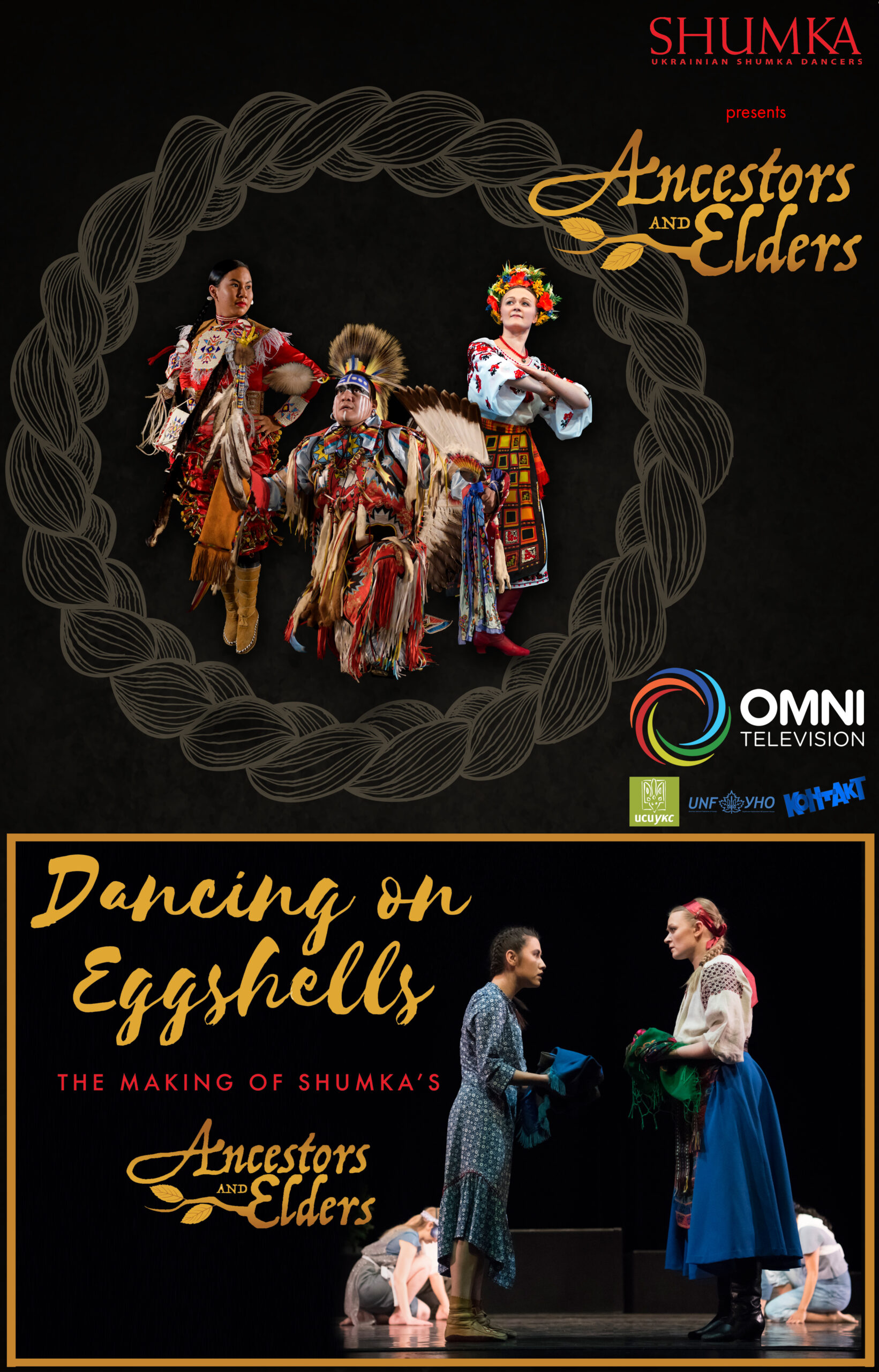 Five years ago, Edmonton’s Ukrainian Shumka Dancers started a discussion on what is Canadian about it as a Ukrainian Canadian Dance company, how relevant it was and how it could become more relevant in the Canadian context.

Some of those questions were answered in 2012 during an interesting cultural event in Edmonton called Zemlya/Nanaskomun: Land/We Give Thanks. It was an Aboriginal/Ukrainian-Canadian ceremonial exchange of gifts that was put together by Myrna Kostash, a Ukrainian Canadian writer, with her colleague, a Métis advocate Sharon Pasula. The ceremony included three exchanges: a dance, a storytelling and song, and an exchange of weavings. Shumka picked up on this theme of Ukrainian-Indigenous relationships which was the beginning of what became the company’s popular show Ancestors & Elders which premiered in 2018.

This theme has absorbed different ideas as it was discussed and put into production.
In the documentary Dancing on Eggshells: The Making of Shumka’s Ancestors & Elders, an Indigenous theatre artist Barry Bilinsky, the show’s co-director, said that the original idea was to boil back down to its roots the idea of celebrating both Ukrainian and Indigenous cultures.

A major theme that has evolved and runs through the show is the land. The land that bears fruits, defines people’s languages, traditions and characters, accepts newcomers and is stolen from the natives.

Anna Marie Sewell, the show’s story consultant, said that we need to remind ourselves that “wherever you go, you’re on the land, whatever cultural interfaces there are that happened here between Ukrainian people and Indigenous people, between any groups of cultural people, are going to end up being flavored by this land”. She said that over the course of the show’s development the Shumka company realized they are Canadian, not Ukrainian. “You go to Ukraine and you are a very distinctive Canadian and I would say, okay, there you go, that’s land,” she said. “And you are here, on this land that has, before you came along, grown up these people who had these ways of being. And those interactions between those people have impacted what Ukrainian identity means in Canada. And Ukrainians have impacted what Indigenous identity means in Canada”.

The renowned Ukrainian Canadian musician Carissa Klopoushak came up with the land theme in the show’s music; she said that “the land theme is something that is ubiquitous throughout this entire show”.

The show’s development involved intensive collaboration between Ukrainian and Indigenous cultures, which did not come easily. “When we started, we were smashing heads together because we had aspirations for two different stories, which were the same story but two entirely different perspectives”, Bilinsky said. But in the end, “We realized that we’re not only talking about the relationship between these multiple communities, but actually building the relationship between these multiple communities”.

The efforts paid off, and not just in an artistic sense but also on the level of human feelings and emotions.

Adrian LaChance from Running Thunder Dancers, which participated in the show, made this observation: “When I think about Shumka Ukrainian Dancers, I think about the real top notch physical formation of what a person can get to if they practice their craft daily, whereas the First Nations, it’s more like a spiritual type of dance, so we are meshing the spiritual and the physical and we’re creating that beautiful energy of emotion”.

Darlene Auger, who played the Indigenous matriarch Kohkom, said probably the most important words about Ancestors & Elders: “I wish that every Ukrainian person and every Indigenous person had this opportunity to come together in this way and learn about one another. This togetherness like we have in the show, this is what we need in the world”.

The show depicts the tragedy of residential schools and, according to the Elder Alsena White, Saddle Cree Nation, it hits the mark: “I really enjoyed the show. Kinda sad, the residential part, I wanted to cry. But yet, everybody else saw it. So that’s the part I really liked, that this is what happened. And we need to tell outsiders what happened to us. It wasn’t just a beautiful Canada”.

The show’s executive producer Darka Tarnawsky told NP-UN that Shumka felt it was very important to show the tragic side of the story of Indigenous peoples in the production: “There are many different ways we could have shown it and I am pleased with how we decided to portray the residential schools. We used archival photos, we used a dramatic dance sequence, it was obvious what dancers were trying to portray”.

Ukrainian Shumka Dancers started in 1959 at the Ukrainian National Federation’s hall in Edmonton. UNF National President and NP-UN’s Head of the Board Jurij Klufas told NP-UN that it was forward-thinking on the part of Shumka to create such a project that reflects the respectful relationship between Ukrainian and Indigenous cultures. “It brings to mind the beautiful photo of former Premier of Alberta Ed Stelmach, who is of Ukrainian background, in a magnificent Indigenous headdress which was bestowed on him as an honour for the relationship that his family had with the Indigenous nations over a hundred years ago,” Klufas said. “He told me, ‘Imagine what language they spoke when they communicated. It was a language of cooperation and respect’. And this is a message brought forward by this production”.

Ancestors & Elders will be broadcast on OMNI 1 on June 21, the National Indigenous Peoples Day. A very symbolic contribution by the Ukrainian Shumka Dancers to the process of reconciliation that Canada needs in the wake of the discovery of unmarked graves where 215 children were buried near the old Kamloops residential school in British Columbia. The Ancestors & Elders show ends in a positive, collaborative way with a joint dance by Ukrainian Shumka Dancers and Running Thunder Dancers.

Jurij Klufas thanks OMNI television for championing this broadcast: “We are very grateful to Teresa Demichino – Senior Newsroom Assistant and Jake Dheer – Senior Manager at OMNI who immediately understood the merits of the respectful collaborative Heritage message that is the main theme of the Ancestors & Elders presentation. This is a very positive step put forth by OMNI Mulicultural television in our collective very much needed national healing process.“