“They are killing our future. Our only choice is to fight!” 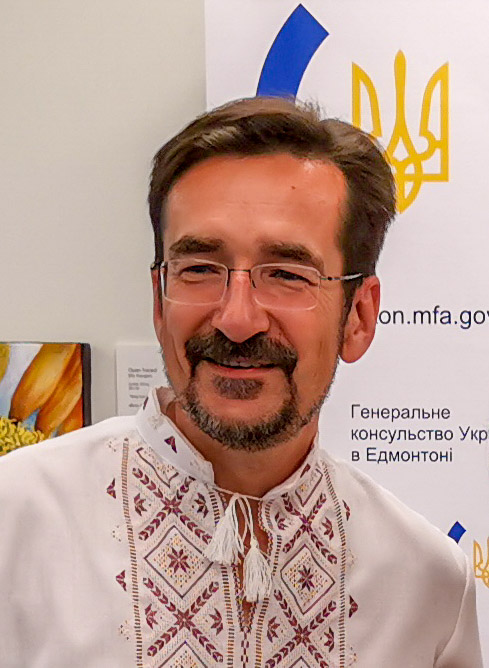 These chilling words reflect the grave dangers facing the Ukrainian people as they defend their country against a bloodthirsty aggressor. Ukraine’s Consul General in Edmonton, Oleksandr Danyleiko was the keynote speaker at the Annual General Meeting of the Bishop Budka Charitable Society in Edmonton, on Wednesday, June 22, 2022 held at the Chateau Louis Hotel. In his remarks, Consul Danyleiko updated the audience with the most recent commentary concerning Russia’s invasion of Ukraine.

The war is now entering its fifth month and the world’s attention to the devastation in Ukraine is beginning to wane. Every country has its own problems, and it is reasonable for people to be concerned about the challenges in their own countries. Given this, it is especially important that the world’s attention continue to be focused on the horrors unleashed upon Ukraine. Shelling of Ukrainian territory and the killing of peaceful civilians has intensified. The scale of destruction in Ukraine is unfathomable. Consul Danyleiko noted that hundreds of thousands of homes have been destroyed. An estimated 15 million people have left their homes. Of these, about seven to eight million have left Ukraine altogether with the vast majority going to Western Europe and almost half of these are in Poland. Consul Danyleiko expressed Ukraine’s deep gratitude to Poland and all the nations who have opened their doors to those fleeing to save their lives. These countries have welcomed Ukrainian refugees with open hearts and their support is strongly felt.

The magnitude of the human catastrophe of Russia’s war on Ukraine is not yet completely known. In addition to the vast number of people displaced, we know that thousands of civilians have been killed in both targeted murders and indiscriminate bombing. “The Russians are killing our future,” stated Consul Danyleiko. Hundreds of children have been confirmed killed but this number is likely much higher. In cities like Mariupol, many more casualties are expected, but confirmation is impossible as there is no access to the city. In addition, the information is that the Russians are eliminating evidence of their crimes. Vast numbers of children have been forcibly moved into Russia. “This is an effort to eliminate us as a nation. The Russians openly proclaim that we are not a country and there are no such people as the Ukrainians, they are not a separate nation, just a part of the Russian empire.”

Consul Danyleiko noted this is second time in one hundred years that Russia has attempted to eliminate the Ukrainian Nation. This year will be the tragic 90th Anniversary of the Holodomor. “Today’s war on Ukraine is a second attempt to wipe out the Ukrainian Nation. Our only choice is to fight,” he said.

In addition to the human calamity of the Russia’s war on Ukraine, there is the enormous devastation of Ukraine’s economy. The GDP of Ukraine is predicted to drop by 35-40 % from December 2020 levels. It is estimated that more than thirty thousand industrial and civilian sites have been completely destroyed and up to 30% of public infrastructure has been severely damaged or destroyed. The economic impact of such losses is huge. Currently, Ukraine is facing a monthly budget deficit of about five billion dollars. Despite the war, pensioners still need to receive their pensions and cities still need to live. After four months of war, the resources are drying up. Consul Danyleiko noted, with deep gratitude, that Canada is providing Ukraine with $1.1 billion of direct support to the budget. This is very meaningful support.

Consul Danyleiko shared some recent numbers that painfully illustrate the devastation of Ukraine’s infrastructure. By latest count, Russia has destroyed 570 hospital and medical facilities, over 540 kindergartens (day cares), 116 churches, 144 historic and cultural sites such as museums, 1938 schools and universities have been damaged and about 184 have been totally destroyed. “They are killing our children; they are killing our future!”

The enemy’s strategy is quite simple. The Kremlin in trying to get the Europeans to exert pressure on Ukraine to negotiate, however, we know that negotiations are a waste of time. The Russians want a period of negotiation so they have time to renovate their armoured vehicles, to recover and move again. They have clearly said that they “want all of Ukraine under Russian control.” As Consul Danyleiko stated, “We will fight! The price is and will be tremendous, but we have no choice but to fight for our survival. We see it as an act of genocide, as civilians and not only the military are being killed. Many countries have recognized the atrocities in Ukraine as genocide.”

Consul Danyleiko noted that Ukrainian law enforcement agencies have launched investigations into war crimes and the crime of genocide. They are gathering evidence to bring to the International Criminal Court and the ICC has opened its own investigation into allegations of genocide. He added that this week of June is going to be an especially important week for Ukraine because the European Unit Summit to be held in Belgium will review Ukraine’s candidacy for membership. Ukraine is expecting to be granted status of candidate for membership. Given that Ukraine has proven it is a European nation and Ukraine is fighting for all of Europe, it would appropriate for the EU to accept Ukraine as a candidate.

To sum up his comments, Consul Danyleiko reiterated that Ukraine is fighting for its existence, fighting for democracy and European values. If Putin is successful in his war against Ukraine, this will only embolden similar leaders around the world to attack other countries as they wish. He recapped several critical points.

First, President Zelenskyy has stated that Ukraine needs weapons, advanced weapons to continue to defend ourselves.

Second, sanctions on Russia need to be increased. There need to be more sanctions for the kremlin to stop the war. Other nations will not enter the war, so we need to make it impossible for the Russians to prolong the war.

Third, Ukraine needs humanitarian support. The situation is getting worse, and we will need more help. The situation in Ukraine is much more dramatic that what we see on TV.

Fourth, society needs to be aware of the war. It is important for our communities abroad to provide information to politicians, to members of Parliament so the war is not forgotten and so people do not get tired of it. Everyone has their problems, but we need to make sure that Ukraine is not forgotten.

Consul Danyleiko asked that we all use our channels and contacts to keep Ukraine on the forefront and ask our politicians for support for Ukraine. He further thanked the Bishop Budka Charitable Society for providing support for recent events for the benefit of refugees who have arrived in Edmonton.

A few questions from the audience followed. One guest wanted to know what the significance is for Ukrainian citizens or the military to have Ukraine become a member of the European Union. The Consul’s response was very direct, as for the war, nothing, he said; “however, it is a huge positive step for the future development and recognition of our own aspirations, and identity. Ukraine is not just a grey zone or buffer between Europe and Russia. Ukraine is a European country and we share the same values and we are fighting for these values. This is positive for the younger generations, for their identity. Yes, sovereignty is important but recognition as a European nation is also very important.”

Concerning the war, another question was what would it take for other countries to get involved? Consul Danyleiko stated that is a difficult question: “All our partners have stated many times since beginning of the war that they will not be involved in this war. They would not even provide a ‘no-fly zone’ that was asked for. They do not want direct conflict with Russia. They just want a peaceful life in Europe, and we have to accept that. We are thankful for the support and weapons.”

A question arose concerning the role of the Russian Orthodox Church in the war and Consul Danyleiko was clear this is a sensitive question. He drew attention to the fact that the ROC is part of the totalitarian regime that justifies the war on Ukraine. The ROC blesses war criminals to do what they are doing in Ukraine. The Ukrainian Orthodox Church of the Moscow patriarchate is breaking with Moscow, and some parishes are moving to the Orthodox Church of Ukraine, but this is a very slow process. He further noted that the state cannot influence religions and church affiliations, but it looks like the influence of the ROC is declining.

Another guest asked what specifically could the community do to help Ukraine other than give money? What can we do to support the intelligentsia? Again, Consul Danyleiko underlined the importance of keeping Ukraine in the news. He suggested the community maintain good relationships with politicians and policy makers, with organizations and businesses and keep them informed.

Neil Koziak, treasurer of the Bishop Budka Charitable Society thanked Consul Danyleiko for his informative comments and expressed how he and our entire community are very proud of the resistance the Ukrainian are putting up against the aggressor. He added, we in the west were teaching Ukraine about democracy and Ukraine is now teaching us about bravery and the commitment to freedom.

Dr. Serge Cipko, President of the Society concluded the formal part of the evening by again reminding that this year will mark the 90th Anniversary of the Holodomor. He noted that the Holodomor was referred to in an English language publication in 1933 as the “shame of the 20th Century.” In 2022, the genocide in Ukraine is the shame of the 21st century.