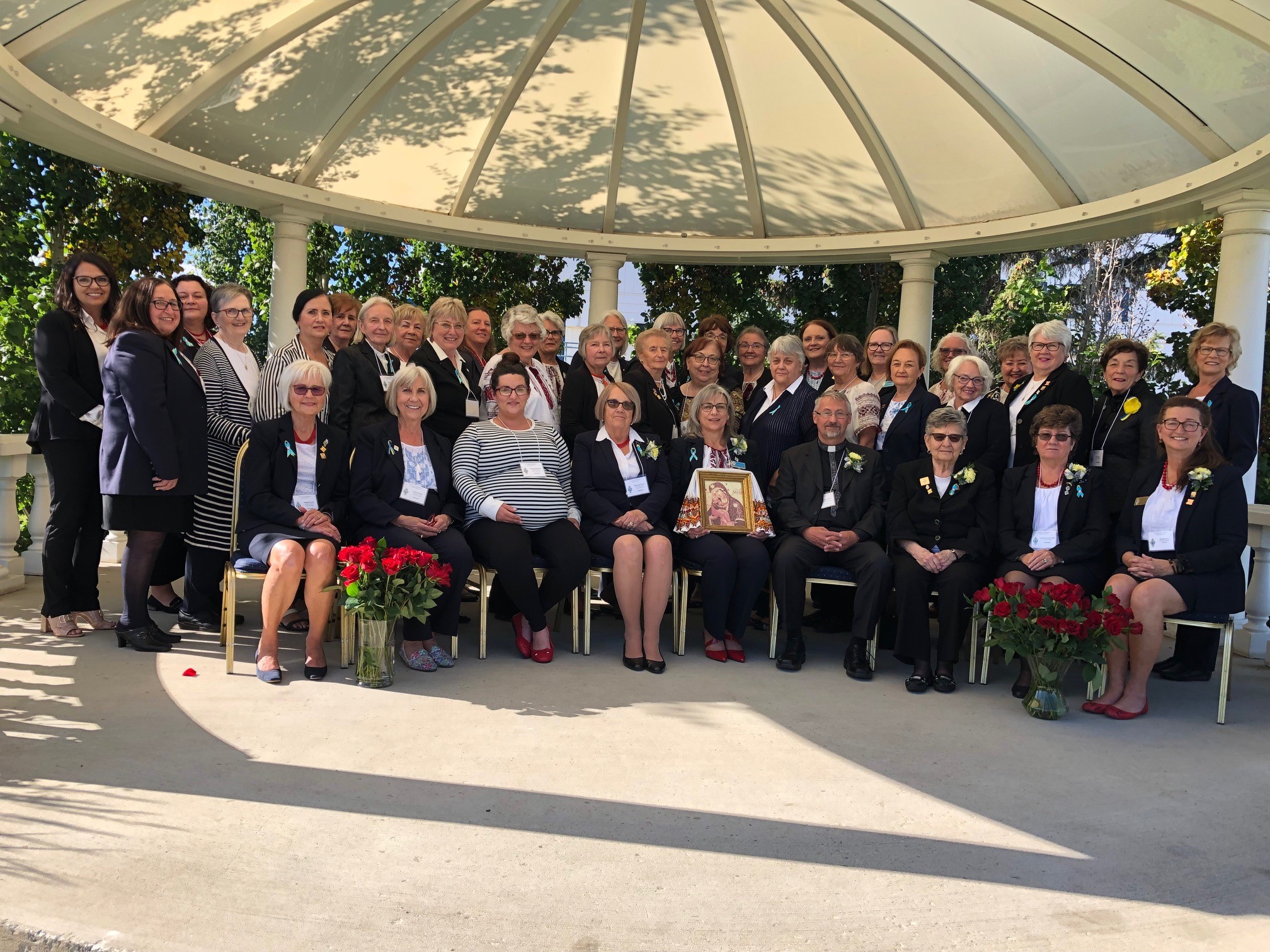 The convention theme for the UCWLC was “The Family: Our Hope, our Future” while the parallel Centralia theme was “Celebrating Families-Welcoming the Stranger in our Midst.”

These themes complimented each other well.

Following the colourful convention opening with a procession of branch flags and the required business matters, greetings were delivered by outgoing Eparchial President Mary Anne Phillips and National UCWLC President Barbara Hlus. Of particular note were comments from Clover Oryschak, Diocesan President of the Catholic Women’s League that represents 3700 women members in 62 parishes in Alberta. Oryschak proudly shared that the CWL raised $5,000 toward Ukrainian relief and resettlement programs and looks forward to working together on initiatives to achieve more for the benefit of our community. 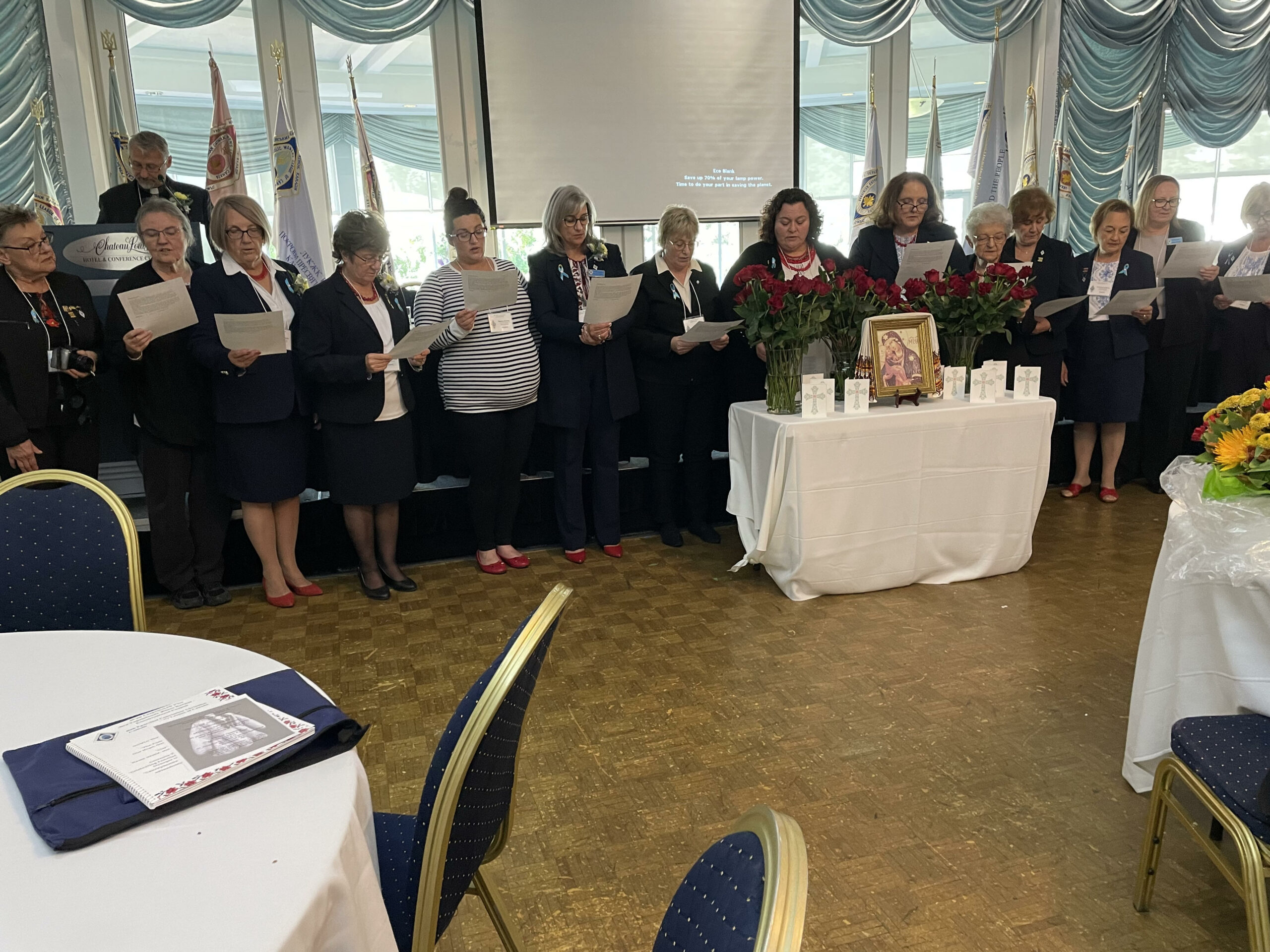 The memory of members who passed away since the last convention was honoured in a touching ceremony with their names were read out and roses placed by the icon of the Virgin Mary. This was followed by a Parastas officiated by Rev. Janko Herbut.

Executive reports were followed with organizational matters covering Nasha Doroha Press matters, the UCWLC Eparchial Museum Project and a review of resolutions. Nasha Doroha matters have been looked after by Rosemarie Nahnybida for many years. She has done an absolutely remarkable job of submitting original materials, encouraging writers, and coordinating with the editors. Rosemarie has kept impeccable records of all submissions. She leaves big shoes to fill now that she is retiring from her role as Nasha Doroha Representative for the Eparchy.

Joyce Chrunik-Rudiak, chair of the Museum Committee had an informative presentation This committee’s mission currently is to establish a permanent museum home that will house an extensive collection accumulated over 7 decades and serve as a hub for community activities and education. In the past year, the Museum Committee held exhibits and demonstrations at U-Fest in May and at the Baba’s and Borshch Festival in Lamont, Alberta where Joyce Chrunik-Rudiak coordinated a kid’s colouring book in honour of the 130th anniversary of Ukrainian settlement and immigration. The highlight of the Museum report involved information on the upcoming 70th Anniversary Celebration of the Museum to be held October 2, with exhibit access continuing until October 6, 2022.

A resolution review was presented by Lidia Wasylyn, Constitutional representative. She briefly reviewed the importance of resolutions describing that “resolutions are the promises we make to ourselves and each other about what we will try to accomplish in the coming term. Within the framework of our mission statement and convention theme, we craft our resolutions to reflect what we want to accomplish.” Lidia Wasylyn noted that a great deal of time was spent on working out the contents of resolutions. The consensus was that rather than creating new ones, the 40th convention will work with the three existing resolutions from the last convention that were not realized and will only add one new resolution that ties into our convention themes. In summary, the three previous resolutions were: First, encouraging younger women to join the league. Second, educating ourselves on issues surrounding human trafficking and supporting initiative that support victims. Third, to use products other than Styrofoam and plastics at League events whenever possible. The added new resolution is to create concrete plans in each branch for supporting families in the faith at all ages and stages.

An interesting and thought-provoking session about Ukrainian Poetess Lesia Ukrainka was presented by Darlene Atamaniuk. Combining commentary and video clips this presentation highlighted the invincible spirit and brilliant mind of this heroic young poet. Darlene Atamaniuk detailed how despite suffering from an incurable, debilitating disease for which there was no cure at the time, Lesia Ukrainka continued to learn, work, create. Because Lesia was born into an educated family that included various writers and intellectuals of the day, she was exposed to modern ideas and was able to travel extensively, firstly to seek treatment and also to experience the cultural centres of the world. She was independent and defiant in her thinking and would not allow her illness nor family expectations to limit her opportunities to create. She was determined to live life to its fullest. Her cultural orientation was decidedly western European, and she spoke six languages. Lesya was infuriated by the fact that her own homeland was denied the freedoms enjoyed by European neighbors and she was fiercely patriotic. Her knowledge of the modern world, of languages and her deep love for her people and Ukrainian culture profoundly influenced her literary creations. Perhaps the most well known being the mythical drama Lisova Pisnya or Forest Song. An animated film version of this work with timely, contemporary significance is being developed by film makers in Ukraine who are working through the war to present this outstanding literary creation to world audiences.

There were opportunities to socialize and with guidance from Joyce Chrunik-Rudiak and Barbara Olynyk, delegates could embroider a symbolic blue and yellow amulet that will be sent to Ukrainian soldiers.

Following a Moleben at Holy Cross Parish, a dinner for all was held at the parish. The keynote speaker was Reverend Ivan Bykov, from the Eparchy of Stryy, Ukraine. Speaking in English, he was very passionate in his description of the current situation in Ukraine and the horrors of the unprovoked Russian invasion of Ukraine.

The second convention day was dedicated to learning. After morning prayers, Bernadette Mandrusiak presented an insightful talk on families and how to engage them more deeply in our faith. Bernadette holds a master’s degree in divinity and is co-director of the Family and life Ministries for the Edmonton Eparchy. She offered a multitude of ideas that can be tried at the parish level to support to parents and families. Her no-nonsense commentary and practical suggestions were based personal experience and her professional training.

Bernadette is enthusiastic about developing resources and learning materials that can be used by all ages to help build and maintain strong, healthy families in our faith. She highlighted four points that are important to remember. First, to ensure our children and young people are part of our parish families, we need to start with the parents and first evangelize and teach the parents. Second, we need to meet our families where and when they are able. This may involve clever use of technology or something simple as adjusting liturgy times. Third, we know parents are our children’s first teachers or catechists. We need to support parents and offer them tools and resources. And finally, we need to treat our parishes as extended family, make them feel like they belong.

The most challenging session was listening to a speaker from CEASE – The Centre to End All Sexual Exploitation. The presenter, Kate Quinn provided clear and well-structured information about the horrible crime of human trafficking. Shockingly, this evil is present in Canada and is not limited to places around the world that we think it might occur. Those who engage in the crime of human trafficking prey upon some of most vulnerable in our society. They use despicable and vile means to trap and enslave their victims, vast majority of whom are young women. Generally, victims have experienced some kind of serious childhood abuse or trauma that degrades their self-esteem. Quinn gave examples of how a woman might become a victim and also mentioned that women refugees fleeing Ukraine as a result of russia’s war on Ukraine can easily be targeted by traffickers. Her information was disturbing and moving at the same time as most present expressed their shock about this loathsome crime along with their gratitude to organizations like CEASE.

A joint session of all Centralia organizations was an opportunity to hear remarks by Bishop David Motiuk, Eparch of Edmonton and Apostolic Administrator of the Eparchy of New Westminster. He skillfully elaborated on the need to be sensitive to those around us, regardless of whether they are close to us or if they are strangers. He tapped into the Centralia theme of welcoming the stranger in our midst, reminding that doing so challenges us to show compassion and love for one another. He called up the faithful to be the missionaries, the leaders and the builders that will make our families and churches strong. He explained that our love and compassion should not be selective but that we can open our hearts to all those in need, specifically noting all those who seek refuge in Canada.

For a break from challenging topics all were treated to refreshments including Poppyseed Chiffon Cakes entered into the cultural contest, organized by Darlene Atamaniuk. A panel of three judges made the tough decision to award first place to Barb Olynyk, second place to Joyce Chrunik-Rudiak and third place of Phyllis Kobitowich.

National UCWLC President Barbara Hlus shared her thoughts about the relationship between the national and eparchial executives. She spoke of the various challenges and successes she has experienced and encouraged all to stay firm in their commitment to the League, our faith and cultural identity.

To conclude the formal sessions, Lidia Wasylyn offered a recap of the convention. She noted that the two days were full of creative ideas, insightful information, learning and inspiration. Participants were given challenges and useful tools for building stronger families and parish communities. As stated by Bernadette Mandrusiak in her presentation, we also have our faith to help us deal with the difficulties that confront us.

In the evening, a formal banquet allowed all to socialize with uplifted spirits, innovative ideas, and new energy to take back to their parishes. The speaker at the banquet was Oceanne Kahanyshyn Fontaine, a former Canadian youth delegate to the UN Climate Change Conference held in Glasgow. She was very articulate and passionate about her area of interest and encouraged all to seek ways to be kinder to the environment.