Team Moskaliuk Offers Design for Memorial to the Victims of Communism 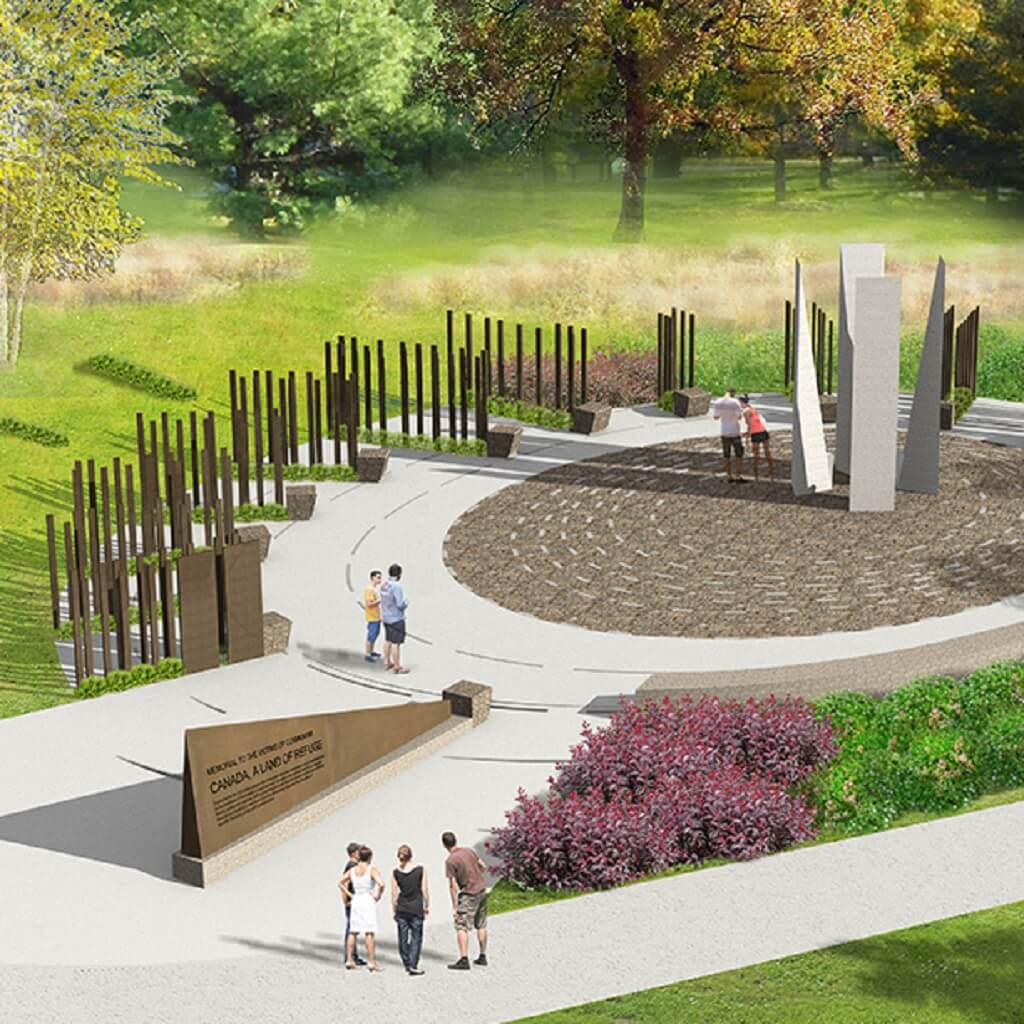 The Ukrainians have probably suffered the most of all nations from communist atrocities, at least in percentage terms of victims to the total population. It is no wonder therefore that a team of architects and artists of Ukrainian descent is participating in the competition organized by the Department of Canadian Heritage and Tribute to Liberty for Memorial to the Victims of Communism. The Memorial will be located in Ottawa’s Garden of the Provinces and Territories, and the competition is closing in late April 2017. Team Moskaliuk (Wiktor Moskaliuk, Larysa Kurylas and Claire Bedat) is among the five design teams shortlisted for the competition.

Wiktor Moskaliuk explained that the monument has two themes – it is dedicated to the victims of communism and recognises Canada as a land of refuge for the victims. These themes are incorporated in Team Moskaliuk’s design: the four pillars in the centre depict Canada as a beacon of light representing equality, freedom, justice and representation. Radiating from the centre, 200 bronze blades signify the triumph of human spirit over the communist regimes. Each blade is etched with the surnames of five victims provided by Canadian families – their respective 1,000 stories of communist repression will be available online and through QR-code that could be scanned on the spot. Each blade also stands for 500,000 victims, the way the monument honours the 100 million deaths estimated as caused by communism globally. The triangular bronze plate at the entrance bears the name and description of the monument. There will also be a bronze plaque with the names of the main donors located by the main entrance.

Wiktor Moskaliuk is knowledgeable about communist atrocities as his parents escaped to England from the Volyn region of Western Ukraine and from Poland after World War 2. He said, ”Canada has maybe 8 million people who could be traced back to people who came from communist countries.” The project’s artist, Larysa Kurylas, already has experience in honoring the victims of communism on a large scale: she designed the “Field of Wheat” National Holodomor Memorial which was opened in downtown Washington, D.C. a year ago.

The designers used several ideas that give their proposed monument a special touch. Wiktor Moskaliuk: “Each of the blades is facing towards the main monument, directing us as we are looking for democracy and freedom. At night, the four pillars will be lit up from the base and the blades will also light up in branches, so you will be able to come here at night and contemplate on what went on. We were not into some very dramatic forms, the design is simple and modest to show respect for countless victims of communism.”

Mr. Moskaliuk, currently with a global engineering firm AECOM, is an architect with 40 years of experience. His portfolio includes more than 150 projects in Canada and overseas. The more recent ones are the Police Training facility in York Region and the University of Sorbonne in Abu-Dhabi. He also was one of the principal architects of Toronto’s Sky Dome (Rogers Centre) and holds a patent on a part of the Dome’s design.

You can vote for the preferred design for the Monument at http://www.cbc.ca/news/canada/ottawa/finalists-design-plans-victims-communism-memorial-1.4006738