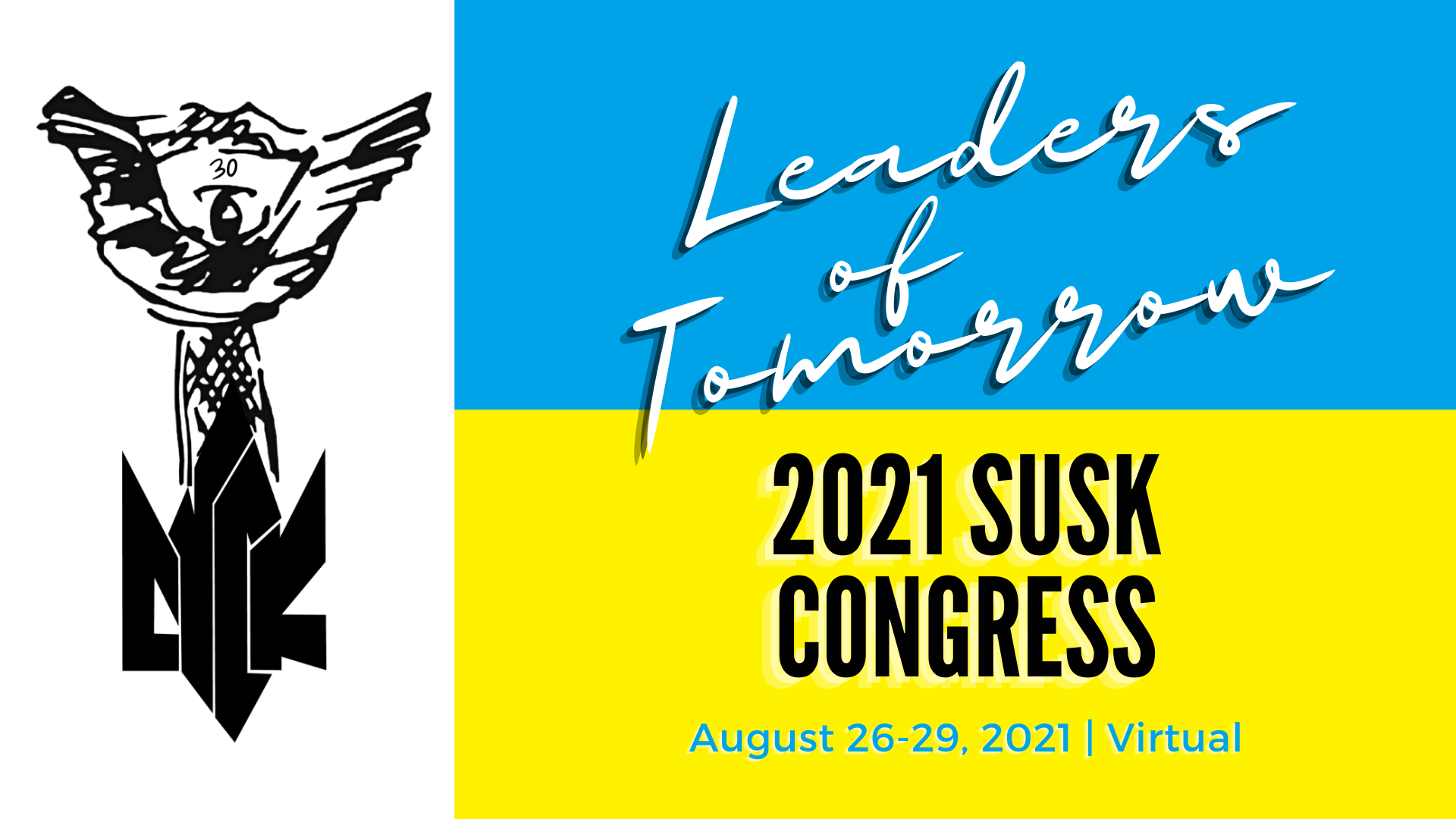 This the second congress to be held online due to the pandemic.

The Ukrainian Canadian Students’ Union (SUSK) will be holding its annual congress over Zoom from Aug. 26 to 29.

The congress, themed around and titled, “Leaders of Tomorrow,” will include several informative sessions, panelists and guest speakers throughout the four-day event. Additionally, SUSK will be holding its presidium or annual general meeting, reviewing its resolutions for the 2021-22 academic year, as well as electing the new board of directors.

Some of the featured individuals include Anna Otroshchenko, the co-founder of a Toronto-based mobile application development agency called Otrofy and Mariia Kupriianova, executive director of the Ukrainian World Congress. Both Otroshchenko and Kupriianova are expected to lead the Women in Leadership session. Daniel Bilak is also expected to participate in the Future of Ukraine session, highlighting expat Canadians living in Ukraine and working in the business sector.

Another session will look at the current relationship and interactions between Canada and Ukraine and offer ideas for student involvement.

Participating in the presidium and the elections is only open to SUSK members — students and recent graduates who are members of their Ukrainian students’ clubs at their post-secondary institutions. However, community members are allowed to register as observers of the congress and attend the various online sessions and events.

According to SUSK alumni director Raya Dzulynsky, the organization’s congress committee has been planning the event since November 2020.

“Initially, we were gonna host an in-person congress in Toronto, but given the uncertainty surrounding COVID-19, we decided to switch to a virtual congress in early 2021,” Dzulynsky said. “We started by brainstorming a theme and creating a congress schedule, then we reached out to potential speakers and sponsors, recently we made a website about congress [and] an Instagram and we’re working hard to spread the word about this awesome congress.”

Since this is the second congress to be held virtually, Sereda Goldie said the congress team has been working hard to deliver an event similar to what would be included in an in-person congress.

“Last year, unfortunately because everything happened with the pandemic so last-minute, we weren’t able to transfer all of the amazing programming that we had to a virtual platform…our virtual congress was mostly business,” Sereda Goldie said. “This year, there’s going to be so much more.”

However, Sereda Goldie also acknowledged that participants may be burnt out from constantly staring at screens, so the committee has been trying to find a good balance for participants.

“We’re trying to find that balance and offer workshops and interesting engaging opportunities, while not having too-too much,” she said.

SUSK will also be sending “swag” and merchandise to congress participants that would typically be given out in-person. Sereda Goldie said this will hopefully be a way to help make the congress feel more authentic amongst participants.

Alongside its upcoming congress, SUSK is also launching a fundraising and fitness challenge called, “Sweat with SUSK” to take place during the month of June. The organization is partnering with Participaction through its Community Better Challenge in an effort to connect with the community and SUSK’s membership.

SUSK will be hosting a fitness class available to all registrants each Sunday in June. The program will feature prizes and challenges throughout its duration. Tickets to participate can be purchased with an early-bird discounted ticket to SUSK’s congress.

Through this initiative, SUSK will also be raising money toward its endowment fund. Dzulynsky said BCU Financial and the Ukrainian Credit Union Limited will be matching donations up to $10,000 each.

“This is a month-long campaign that’s sure to entice everyone in our community to become more active,” Dzulynsky said. “Anyone can participate in Sweat with SUSK. It’s a great opportunity to connect with your friends and family across the country.”