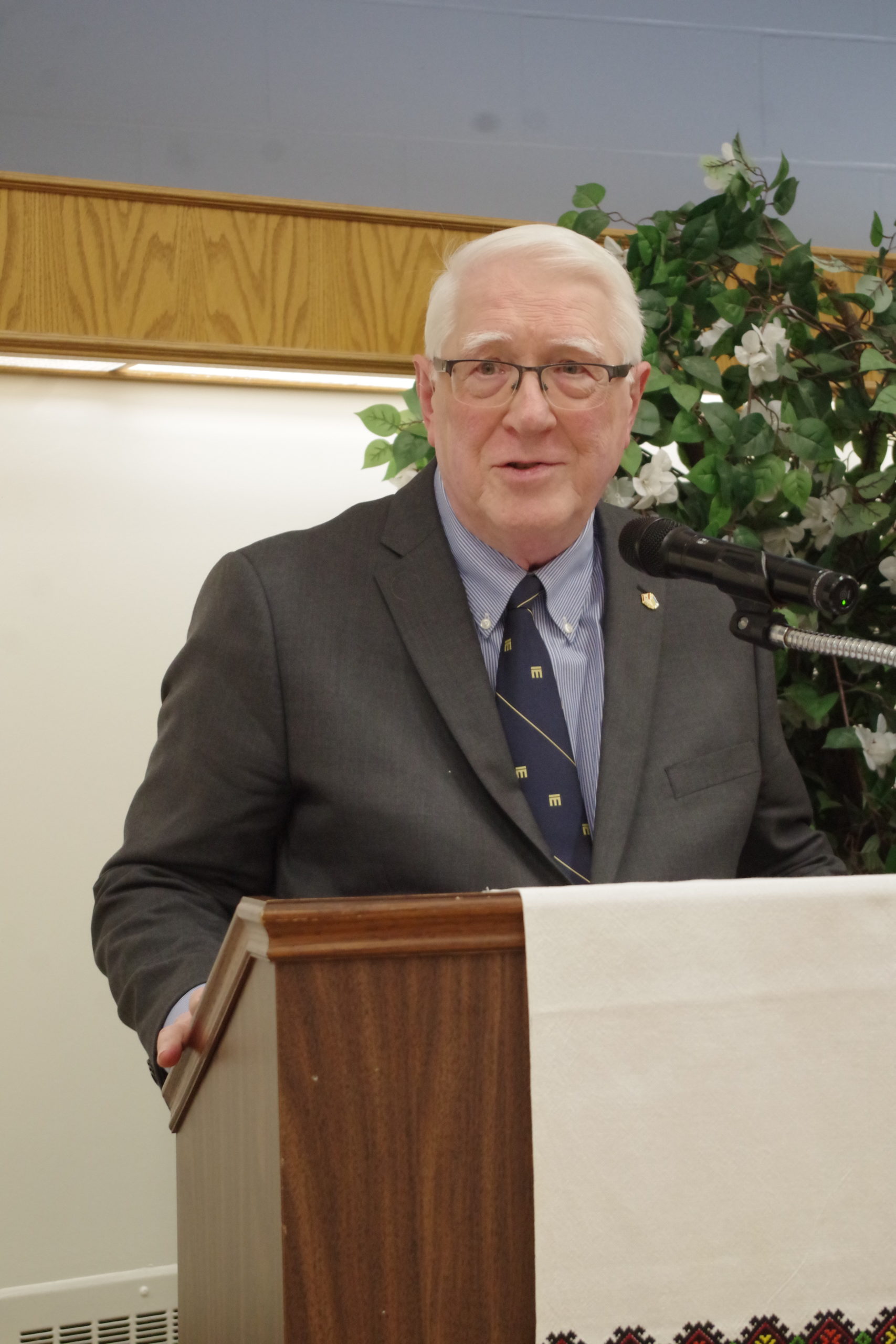 Canadians are part of the alliance that is stopping Russia’s aggression both internationally and in Ukraine and “our priority here in Alberta is to help Ukraine with the following agenda: stay united; donate; volunteer; and help Ukraine rebuild,” said the keynote speaker at the 27th annual Kyiv Konnection Banquet in Edmonton, May 10.

Speaking the fundraising event sponsored by the Ukrainian Foundation for College Education (UFCE) at St. John’s Cultural Centre to support students and faculty affected by the war in Ukraine, Dr. Roman Petryshyn, C.M. urged members of the community to:

• Work locally, until the successful conclusion of the war, to maintain Albertans and Canadians’ united support for Ukraine;
• Donate to the Ukrainian World Congress to help Ukraine’s Armed Forces;
• Donate to the Canada Ukraine Foundation and to churches to help humanitarian aid in Ukraine and for settling Ukrainian citizens in Canada;
• Volunteer to help refugees find housing, jobs and friends in Canada; and
• Finally, remember that dozens of countries, including Canada, will help to rebuild Ukraine for many years after the war stops. “This will be done through loans from the World Bank, global trade and commerce, re-directing billions of Russian oligarchic dollars frozen in western accounts, and requiring Russia to pay for reparations to be paid for the damage done by their armed forces”.

Dr. Petryshyn pointed out that as Canadians “we battle by using truthful facts to counter Russia’s constant lying; by providing military equipment; by cooperating with European and North American oil, gas and coal embargoes; by donating government stability finances; and providing humanitarian aid;

“All of this is being done without placing NATO troops on the ground in Ukraine in order to prevent Russia having a pretext to start a limited tactical nuclear attack.

“Canada and our allies will support Ukraine until it is victorious and able to negotiate peace on its own terms. What must follow then is a new international ‘Marshall Plan’ to rebuild Ukraine’s housing and infrastructure and full economic and military integration into Europe.

“The war will last many more months until Russia comes to understand that the era of Russian imperialism imposed on the countries of Eastern Europe and the democratic world — is over. Sooner, rather than later, Russia’s regime will learn to respect Ukraine‘s national independence. Russia itself must realize that it must work as a nation state, on the basis of parity with other European nation states — not on the basis imperialism, militarism and racism,” he said.

Dr. Petryshyn, who is the founding director of the Ukrainian Resource and Development Centre (URDC) at Grant MacEwan University (GMU) was recently invested as a Member of the Order of Canada (C.M.) “for his leadership in the evolution of multiculturalism in Canada, and for his advocacy of ethnocultural inclusion in mainstream society.”

In his address, Dr. Petryshyn detailed the loss of human life and destruction that Russia has inflicted on Ukraine and focussed on three questions:

• How do we make sense of this war?
• Why are the North Atlantic Treaty Organization (NATO) and the European Union (EU) involved? and
• What have Canada, Alberta and the Ukrainian Canadian community been doing in this war effort?

In answer to the first, he suggested there are three components to Russia’s expansionist drive:

• Russian President Vladimir Putin’s ideology, myths and lies claim that Russia is still an imperial world power, while the reality is that today’s Russia is but a fraction of what was the USSR with an economy the size of Italy’s
• The war is about conquering and stealing strategic land and waters historically controlled by Ukraine;
• The war is about Russia’s political culture which throughout the last 500 years has remained a land empire with a state and society that never did experience a lasting, genuine competitive, plural system of democratic governance. The Russian political system does not value the rights and dignity of the individual over that of state opting instead for the imperial concept of “Might Makes Right” .

The involvement of NATO and the EU is due to the fact that the western democratic world, for its own interests, cannot fail to preserve the independence of Ukraine and consequently to prevent a Russian threat to their own independence and security.

What caught everybody by surprise was the incompetence of the Russian military and the resilience of the Ukrainians.

“Ukrainian Armed Forces, in small attack groups, proved themselves highly motivated to fight for their homeland. They were mobile in attacking against Russian long military convoys targeted at five major cities. They exploded the myth of Russia’s invincibility and demonstrated their indomitable patriotism, courage and ability to blunt the slow-moving convoys on the highways of Northern Ukraine near Kyiv and Kharkiv. Ukrainian Armed Forces (UAF) destroyed 20% of the so-called Russian ‘elite forces’ and certainly demoralized them in what (British) Prime Minister (Boris) Johnson called ‘Ukraine’s finest hour’,” he said.

“Ukraine, led by President Zelenskyy, has triumphed over Russia’s ideologically-driven invasion. Ukraine now needs to persevere in battle until a formal peace is negotiated and Ukraine’s security is made permanent,” Dr. Petryshyn added.

Detailing Canada’s assistance he noted that:

• Due to Operation Unifier, which has trained over 30,000 UAF personnel, Ukraine was ready for the invasion;
• Since the invasion Canada has sanctioned more than 1000 Russian people and entities;
• Canada’s Royal Canadian Mounted Police (RCMP), through its participation in the Crimes Against Humanity and War Crimes Program, is investigating allegations of war crimes;
• Canada now proposes to provide an additional $500 million in military aid to Ukraine in 2022-23, including the provision of heavy artillery;
• Canada has agreed to take a large number of evacuees and provide a simplified three-year visa called the Canada-Ukraine Authorization for Emergency Travel program (CUAET);
• The war has focused Canada’s attention on Ukraine in an unprecedented manner. Alberta and across Canada has seen a series of spontaneous projects supporting Ukraine;
• There has been massive persistent support from Canadian mass media (such as CBC and the Globe and Mail) that sent their journalists into Ukraine. Public support for Ukraine from coast to coast to coast has included singing the Ukrainian anthem at NHL hockey games;
• Since the February 24 invasion Alberta’s total assistance to Ukraine has exceeded $13 million for humanitarian aid, defensive equipment, and with additional funding of more than $2 million to support immigrant settlement and language services;
• The University of Alberta and MacEwan, among other universities, have waived tuition fees for some Ukrainian evacuee students.
• The URDC has created a resource site for information, including podcasts and books about the war in Ukraine, through the MacEwan Library.
• URDC is providing free English classes for Ukrainian nationals.

He then focussed on the work done by the Canada Ukraine Foundation (CUF), Alberta’s two major Ukrainian churches and the Ukrainian Canadian Congress (UCC) at the national, provincial and city levels.

Already on the ground in Ukraine since 1995, (CUF) became Canada’s preferred agency for public donations to help the people in Ukraine, and Ukrainian citizens who fled to neighbouring East European countries, and has received over $30 million in gifts. CUF is working with more than a dozen international organizations and has purchased over $2 million individual and bulk food packages, bought medical and hospital supplies (such as dialysis and x-ray machines) and aid for their transportation to Ukraine, funded aid to deaf displaced persons and cerebral palsy disability persons; and arranged for transport of cancer patients to Canadian hospitals.

Both the Ukrainian Greek Catholic and Ukrainian Orthodox Churches of Canada have been ben actively involved in the care and support of Ukrainians affected by the war.

The Ukrainian Greek Catholic Eparchy of Edmonton has led a matching fundraising campaign through church parishes to raise funds that have been donated to Caritas Foundation which has been active in Ukraine since independence.

The Western Eparchy and Consistory of the UOCC have successfully formalized its relationship with the Orthodox Church of Ukraine to support to needy groups in Ukraine and continues to support orphans in Ukraine who need even greater support now because of the war.

“Parishes of both Ukrainian churches provide spiritual care and work closely with other organizations that provide assistance to the victims of war in Ukraine in various ways . This includes: families willing to host, provide housing and orientation to a new culture and society; access to professional and volunteer interpreters; paying for shipment of humanitarian help; informing newcomers to know where to go, whom to contact and how to secure help,” he said

UCC National has continued to take the lead in communicating with the Government of Canada and Opposition parties, directing assistance to Ukrainian citizens and displaced persons settling in Canada. It was instrumental in establishing the Stand Up with Ukraine campaign that united tens of thousands of Canadians through frequent pro-Ukraine demonstrations, fundraising campaigns and social and mass media information.

In Alberta UCC-APC President Orysia Boychuk created a web site called “Alberta Stands with Ukraine” supported by Ed Stelmach, Bishops David and Ilarion along with community leaders from across Alberta.

UCC-APC has also just hired staff to coordinate across Alberta and with the Alberta Association of Immigrant Serving Agencies and Catholic Social Services and they are already working with over 1,200 settlers in a dozen locations across the province.

In Edmonton the Ukrainian Canadian Social Services led by John Shalewa has a welcome centre in Kingsway Garden Mall, in addition to its office on 97 Ave,and 116 Street providing clothing, social events and gift cards. Also, the Meest company and the Boiler Makers Union have a warehouse that is storing and making used furniture available to displaced Ukrainians.

Representing the Government of Ukraine, Edmonton’s Consul-General Oleksandr Damyleiko outlined the scope of Russian atrocities including the number of Ukrainian children killed by Russians, the number of raped women and girls, and the number of destroyed hospitals, schools and churches.

“We need a lot of support from our international partners to defeat Russians and then, what is important, to rebuild the country. Such support is much needed in the sphere of science and education also.

“Young Ukrainians, especially well-educated, are the future of Ukraine. They will be rebuilding our country and economy, developing our free and democratic society. After the massive destruction inflicted by Russians we are going to rebuild Ukraine on a new basis, using newest technologies and knowledge.

“That is why I salute the Ukrainian Resource and Development Centre, and the Ukrainian Foundation for College Education for their activity in establishing and promoting Ukraine-Canada cooperation in the spheres of science and education, for supporting Ukrainian universities and students, for giving them opportunities to participate in some educational projects and initiatives.” He said.

GMU President and Vice-Chancellor Dr. Annette Trimbee said that since the war broke out UFCE has donated 20 $1500 settlement grants for students fleeing the war, while GMU is providing academic shelter and support to nine students from partner universities in Ukraine. In addition:

As more people arrive from Ukraine, the Faculty of Nursing continues to provide items for welcome packages;

English language classes, launched by the URDC thanks to UFCE donations, started at the beginning of May;

Instructors from the Ukrainian community and MacEwan’s School of Continuing Education are collaborating to teach classes for our newcomers; and

The Faculty of Fine Arts and Communications stepped up over the past few weeks and have donated the proceeds from our music and theatre performances directly to humanitarian relief. Over $10,000 has been raised.

“All of these actions demonstrate that universities are not simply a place of learning, but a space of collaboration in service of the public good,” she said.