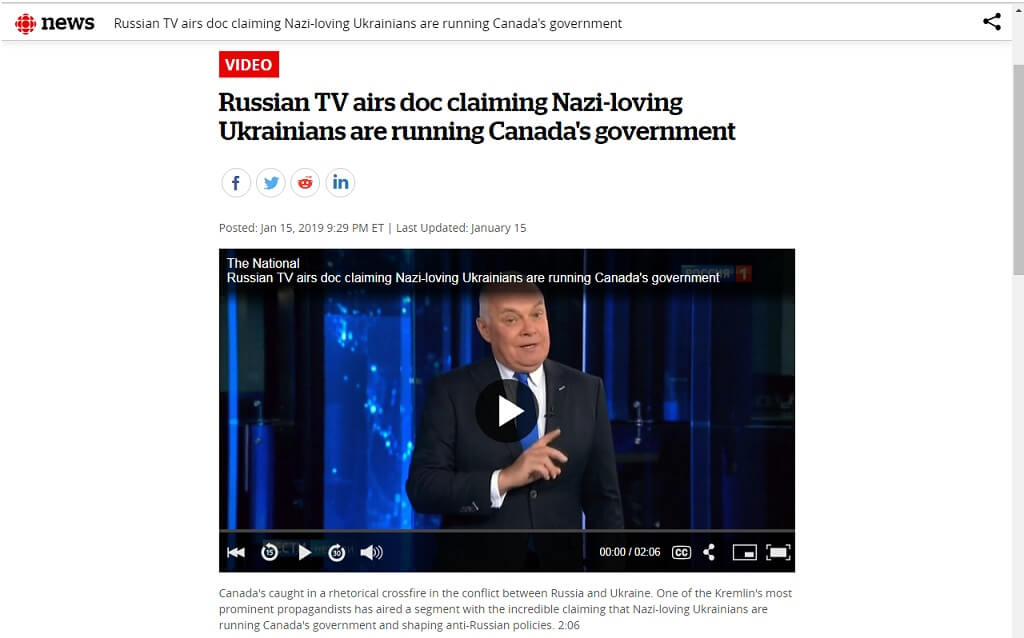 This may come as a surprise to our readers, but our community has so much clout in this country, that – through our umbrella organization, the Ukrainian Canadian Congress – we actually “have the power” to “dictate Canadian foreign policy.”

That is so, according to Russian broadcaster Dmitry Kiselyov, who runs the prime-time Sunday night program, Vesti Nedeli (News of the Week), considered one of the most influential sources of news in the country.

January 13, Kiselyov set his sights on the Ukrainian community in Canada, labelling us as pro-Nazi and singling out Foreign Minister Chrystia Freeland and Liberal MP Borys Wrzesnewskyj as the main offenders who dictate Canada’s anti-Russian policy.

This was exposed by CBC News on January 15 in a piece entitled “Russian TV airs doc claiming Nazi-loving Ukrainians are running Canada’s government”.

Reacting to the CBC report, UCC National CEO Ihor Michalchyshyn stated: “The report by the CBC exposes the Russian government’s insidious propaganda campaign against Canada and the Ukrainian Canadian community. Clearly, Canada’s strong support for Ukraine is seen as a threat by a Russian regime that invades sovereign states, tortures and murders political opponents and seeks to undermine the international rules-based order.

“The slanderous and bizarre claims that are spread through Russian-government-controlled media against Canada reveal the depths to which the Russian regime will stoop in order to attack countries and communities that support Ukraine in the face of Russia’s five-year war of aggression against Ukraine.”

The UCC says it is very likely that Russia will increase its attempts to target Canada as the 2019 Federal election draws nearer and calls on the Government of Canada “to ensure that a comprehensive and effective strategy to combat disinformation is in place to safeguard our democracy against Russian attacks.”

The UCC is not alone in its assessment, nor in its call for action.

Just two days after the CBC report and four days after Kiselyov’s fabrication came out, the prestigious non-partisan Ottawa-based think-tank, the MacDonald-Laurier Institute issued a report entitled “Stemming the Virus: Understanding and responding to the threat of Russian Disinformation”. It detailed the extent of the Russian Federation’s cyberwarfare and termed it a virus “infecting and then replicating itself independently within western societies”, whose objective is to “tear apart our society and undermine our trust in our government, media institutions, and each other.”

“Truth is a mere nuisance in today’s world of Kremlin propaganda. In the course of its conflict against Ukraine, Russian state news has boldly fabricated facts and evidence to support its positions, including fake interviews and even images. During the 2013-2014 Euromaidan uprisings in Ukraine, Russian television broadcast interviews with people who were secretly actors, alleging that Ukrainian ‘fascists’ had committed atrocities, including the crucifixion of a child by Ukrainian forces. In the case of the 2014 downing of a civilian aircraft, Malaysian Airlines flight MH17, UK investigative collective Bellingcat discovered that Kremlin agents manufactured evidence to cover up Russian state involvement in the crime,” it states.

It also notes that “the distortion and falsification of history is a critical component of Vladimir Putin’s domestic and foreign strategy.”

“The Putin regime’s legitimacy depends on the presence of powerful enemies that, they claim, are seeking to undermine and destroy Russia; Putin is presented as the only Russian leader capable of protecting his country and its people.

“A classic Soviet tactic was to label all western adversaries as ‘fascists’; a propaganda tradition revived and expanded by the Putin regime. The fascist label is an extremely useful tool. Russians see it as synonymous with ‘enemy.’ When applied by the state, it requires little in the way of explanation and is simply accepted. In the West, the term has been used interchangeably with ‘Nazi’ to better inflict the greatest amount of propaganda damage…. Today, the term is applied liberally to anyone who disagrees with the Putin regime. Ukraine’s Euromaidan uprising has been characterized as a western-supported ‘fascist’ coup (and simultaneously as a Jewish and gay conspiracy). Defending Russians against fascists was also used to justify the Kremlin’s illegal annexation of Crimea and invasion of Eastern Ukraine.”

The report calls for the creation of a dedicated office, the National Centre for Strategic Communications and Digital Democracy, which would, among other things:

“As western societies continue to limit their media consumption to social media platforms, we must promote diversification that includes traditional professional media. We must also support the development of credible media alternatives to state run and supported platforms, especially third language domestic media. A credible and professional Canadian alternative to state media can help ween local ethnic communities away from the state spun narratives that are aimed to manipulate viewers,” it adds.

The conclusion of the report is most perceptive: “As long as Vladimir Putin remains in power, so too does the menace of information warfare and the escalating danger of allowing our own democracies to spin into the venomous political dysfunction that we have see in the US and elsewhere. Canada’s response must be robust and take into account all sources and methods of how foreign information warfare and democratic interference are conducted. Most importantly, we must be prepared for a very long fight.”