The Ukraine Paediatric Fellowship Program (UPFP) was established at SickKids Hospital in Toronto in 2012 and has supported numerous teaching and training missions for Ukrainian paediatric physicians over the years. Clinical teams have travelled to different children’s hospitals in Ukraine (Lviv, Kyiv, Lutsk, Uzhhorod, Odesa and Dnipro) and Ukrainian doctors have come to Canada for month long observations and for full year clinical fellowships. Relationships with our colleagues in Ukraine, specializing in Brain Disorders in children (epilepsy, brain tumours, congenital abnormalities, anxiety and depression), have grown and strengthened, leading to effective and rewarding collaborations. Strategic, complex medical equipment has been donated to support our colleagues in providing up to date interventions for children with these disorders. Plans were being made to expand teaching and treatment into the genetic basis of some of these illnesses however, with the onset of Covid-19, these plans were suspended, and our communications and teaching became virtual until such time that we could travel again.

Although virtual teaching is productive, it cannot replicate the powerful dynamics that transpire during in- person interactions which lead to the establishment of strong professional and personal relationships. So, it was with great excitement that our UPFP team began to plan for a teaching visit for June of 2022. We had also purchased advanced medical equipment that we wanted to transfer to Ukraine. When the war broke out on February 24, 2022, we were horrified, as were so many individuals in Ukraine and around the world.

With the onset of the war, numerous initiatives in humanitarian domains were proposed and instituted by various international aid groups and governments including medical support. This support has focused on providing critically needed resources (medications, equipment and staff), but transferring these into areas of need in Ukraine, especially in the eastern part of the country, has been extremely difficult. Indeed, in the first months of the war, getting resources to Ukraine from Canada was very challenging.

While exploring potential channels through which to send equipment to Ukraine, I was introduced to the organization Canadian Medical Assistance Teams (CMAT), which consists of medical volunteers from across Canada, travelling to disaster areas to provide medical care. One of the co-founders and directors of CMAT, Valerie Rzepka, became interested in forming mission teams to deploy and provide care to refugees and internally displaced persons in Ukraine. Valerie is Polish-Canadian and has many colleagues in Poland who have been offering support to Ukraine in different ways since the war began. By March 2022, she and her colleagues had swiftly organized rotating teams of physicians, psychologists, nurses and nurse practitioners from across Canada, most of whom are not of Ukrainian heritage, to travel to Poland and western Ukraine to offer medical care. In June 2022 I had the privilege to join the CMAT team on one of these missions. 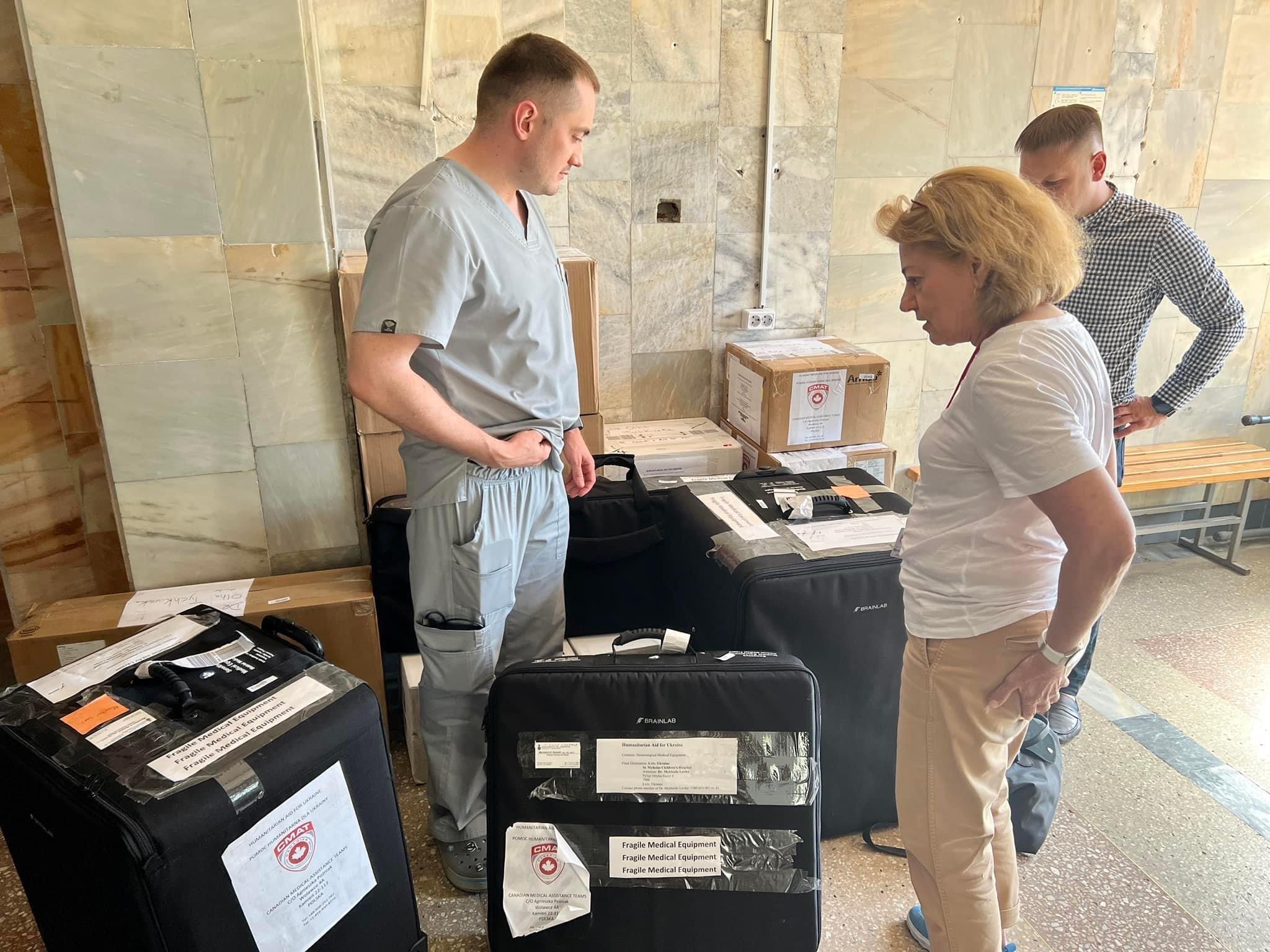 For a number of reasons, the deployed teams have to reside in Poland overnight and cross the border into Ukraine daily to provide care. This was no small feat when I was there as the lines of cars and trucks on either side of the border extended for up to 30 km each day, all waiting patiently for hours and sometimes even days, to cross. A small medical clinic had been established at the border crossing Yahodin/Dorohusk, in a shipping container, by a coalition of non-governmental organizations (NGOs). CMAT staffed the clinic to provide primary and mental health care to the many Ukrainians waiting to leave Ukraine and cross into Poland. The Canadians also staffed a mobile clinic that travelled to the towns of Kovel and Volodymyr in Volyn oblast during the week to provide similar care to internally displaced Ukrainians, mostly from the eastern oblasts.

During my trip I saw numerous NGOs and individuals from Europe and North America working at the border and in western Ukraine, to provide humanitarian assistance. Each tried to address an aspect of need that they felt they could be useful in, but with minimal coordination under the shifting circumstances of uncertainty, there was much confusion and often duplication of services. With so many initiatives, all well intentioned, it was difficult to track what was being accomplished. The mingling of so many different people – refugees, border guards, police, soldiers, volunteers, aid workers, physicians and nurses, local inhabitants and other sundry, questionable characters – made for at times a turbulent and agitated environment.

Stress, anxiety, grief and fatigue were certainly the dominant sentiments among the Ukrainian population and were primary concerns to address at first contact with our CMAT team of physicians and nurses. Often individuals came to our clinic with initial complaints of physical ailments, but when given time to tell their stories of what had transpired in their lives recently, it became clear that the acute trauma and shock of the war, loss of family, friends and community, displacement from their homes and uncertainty about their futures were what they were primarily struggling with. I was particularly struck by the encounters I had with the elderly, especially men, who physically frail, sometimes alone with no family to support them, strained to put on a brave face, but given the opportunity to voice their fears, began to weep while at the same time maintaining that “men don’t cry”. These were truly heartbreaking moments.

At the mobile clinic in Volodymyr, we tried to support a cohort of displaced persons from Kharkiv, mostly women and children. They were living in crowded rooms in a rundown college dormitory, trying to create as normalized, daily routines for themselves as possible, amidst the ongoing air raid sirens, news of bombings, financial concerns, the emotional turmoil of processing what was happening to them and determining how to move forward. Insomnia, nightmares, sadness, depression, guilt, anxiety, anger and panic attacks were frequent concerns that both adults and children expressed, along with lack of medications for chronic illnesses. Although our presence in the towns was temporary, we worked to link the patients we saw with local family doctors and psychologists to provide some semblance of ongoing care as the individuals struggled to make some plans for the near future.

While working with the CMAT team, I also hoped to bring some pieces of medical equipment and medications to a UPFP collaborating children’s hospital in Lviv, now called St. Nicholas Children’s Hospital. I had not been able to find a shipper in Canada willing to take this cargo but with Valerie Rzepka’s help, the Polish airline LOT agreed to ship the 400 lbs of equipment without charge as our team’s carry-on “luggage”. Once in Warsaw, we transported the 15 boxes of equipment, first to Chelm (Kholm) for storage in a Polish aid worker’s home. Then, Valerie and I packed up the boxes into a rental car, and with all the necessary documentation in hand, travelled to a border crossing where surprised, but compassionate, Polish and Ukrainian border guards allowed us to cross into Ukraine unimpeded. We drove to Lviv to deliver a neuro-navigational system for neurosurgery, a video-EEG monitoring system for diagnosing different types of epilepsy, and boxes of various medications including anti-epileptic drugs, antibiotics and analgesics, all worth well over $325,000.

In Lviv, the streets were quieter than usual with fewer people and cars but stores and businesses continued to operate. At the hospital, the corridors were busier with patients than I had experienced on previous visits but in going around the wards with the doctors, I could see that much progress had been made in the 3 years since I had last been there. Instead of the profound despair I had been expecting amongst my Ukrainian colleagues, I saw a steely determination to continue to advance their medical skills by whatever means possible during a war and provide the best care they can to their patients. Certainly, the pressures of working in an environment in which there is constant fear of potential harm to oneself and those you are responsible for was evident in the overall weariness everyone acknowledged they were experiencing. In addition, there were worries about the safety and future of their own families. Nevertheless, the physicians were proceeding with surgeries they had been preparing for before the war, such as organ transplantations, bone marrow transplants for cancer patients, mental health assistance programs for children and making plans for future development of services. They were extremely appreciative of all of the aid they have been receiving from the Ukrainian diaspora as well as the numerous humanitarian agencies.

My impressions, from a medical perspective, on leaving the country, were that certain areas need to be prioritized over others in order for international organizations and the diaspora to be able to respond effectively with their support. In my opinion, physical trauma and mental health should be at the forefront of these priorities. Trauma, especially to limbs, has led to many amputations some of which may have been prevented or better managed with more resources, human and material, and more training. Similarly, with respect to mental health, the need for psychiatric services is overwhelming, especially for children and the disabled, and although many professionals are responding and providing care, they risk being overcome with fatigue and require more support and training. Some of this can be dealt with virtually, but in person contact and support are still essential.

Most importantly, for those of us working to assist Ukraine, we need to continue to provide hope for the future to the younger generation that had been trying to establish itself prior to the war to build a better, more democratic country. Ukraine cannot afford to lose these citizens to other countries if it is to recover, develop and prosper when the war ends.

Although I was spared seeing the horrors and atrocities afflicting the country moving eastward, I returned to Canada in shock. I cannot believe this is happening to a country I have loved for all of my life. I cannot understand why the democratic countries of the world do not have the collective political will to stop this evil destruction of a country and its people.

When our team first arrived in Ukraine, we were advised to download a smartphone App that would notify us when and where air raid sirens were sounding in Ukraine, especially in the areas we were travelling in. That App is still active on my phone; its frequent notifications remind me of what Ukrainians are having to endure every day.