Putin both blinked and got what he wanted, says Waschuk 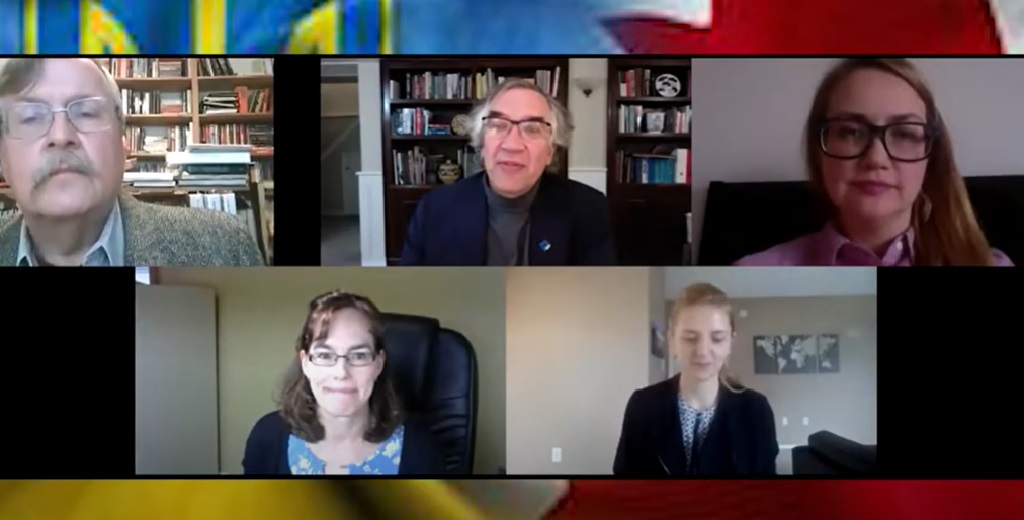 In building up his military force along Ukraine’s border then withdrawing the troops, Russian President Vladimir Putin “both blinked and got what he wanted”, says Canada’s former Ambassador to Ukraine.

“I think they got enough signals, on the one hand from the Biden administration that bad things might happen to their bank accounts or other sectors of their economy if they chose to do that, but also the carrot of a summit meeting which plays to the Putin and Russian obsession with ‘we are the other great power. You can call us an economy the size of Portugal, but we are nuclear armed. We are scary. You got to take us seriously’… They’ve gained in self esteem, but they had to step back from some of the territorial ambitions they may have had,” said Roman Waschuk during the panel discussion “Canada’s Cooperation with Ukraine in the Defence and Security Sectors”, April 30.

The online session was organized by the Centre for Ukrainian Canadian Studies at St. Andrew’s College, University of Manitoba in Winnipeg.

Waschuk was responding to a question from New Pathway – Ukrainian News.
Responding to the same question, Borys Gengalo, a project manager, Ukraine analyst, former soldier and trainer of the Polish-Ukrainian Peacekeeping Battalion, said that from a military perspective the Russians achieved quite a lot.

“This was one massive practice or training exercise to prepare for the invasion of Ukraine. They’re going to sit back and they’re going to do their lessons learned, figure out what their mistakes were, try and correct them for next time around. One element. Second element: They already had two major semi-permanent camps, one in Kursk Oblast, the other in Briansk Oblast sitting on the Ukrainian border, Briansk touching both Belarus and Ukraine. Now they’ve managed to put together a third one in Voronezh Oblast, backing up the one in Kursk and sitting just north of Kharkiv. So, they’ve developed their military infrastructure at the border and thirdly, and this is uncertain but some of the media coverage seems to suggest or state outright that they’ve left a lot of their equipment in places that they moved in and this is very important. Logistically, moving thousand of pieces of equipment is very difficult,“ he said.

“So, both from a learning point of view, from an infrastructure point of view and from an equipment in place point of view, they’re in a much better position next time around and the warning time for Ukraine as a result will be a lot shorter than it was this time if they actually decide to do something,” added Gengalo.

Responding to another question, mainly his take on former U.S. Secretary of State Henry Kissinger’s comments that Ukraine should be non-aligned and a meeting place for East and West, Waschuk dismissed it outright.

“Being non-aligned in 2014 allowed Ukraine to become a meeting ground for Russian tanks coming into its territory. Dr. Kissinger is a very distinguished individual but being consigned to buffer status is somewhat uncomfortable if you are the actual buffer,” he said.

Waschuk also noted that there is no consensus within NATO whether to act upon “the 2008 Bucharest quasi-commitment to allow Georgia and Ukraine to join so it’s not going to happen in the next year or two”. However, though the various programs Canada and others have been supporting, Ukraine has become more interoperable with NATO and now has Enhanced Opportunity Partner status.

Nevertheless, Ukraine has a better chance of getting admitted to the European Union than NATO because members are reluctant to bring in a country that is involved in an ongoing conflict.

In his opening remarks, Waschuk, who served as Ambassador from 2014 to 2019 recalled that a Canadian supply plane was the first western military aircraft to land in Kyiv’s Boryspil Airport since the hostilities broke out in March 2014.

“Everyone else was afraid to come and land and Canada was not and a prominent Manitoban was not. That’s James Bezan, who was then the Parliamentary Secretary to the Minister of Defence, who came with that shipment.

This was followed by a second shipment of non-lethal but essential goods, including the entire stock of winter grade uniforms and boots stockpiled since Bosnian War in 1994.
“For Ukrainians those uniforms were a way of us reaching out and embracing them. An army marches on its feet, which means boots are very important,” he said.

Waschuk continued that the Ukrainian Minister of Defence told him “they could not have called up the third wave of mobilization without that assistance from Canada. You could say It’s not lethal, but it was logistically key to ensuring that Ukraine could stay as a coherent fighting force in the field when active combat was still occurring.”

Compared with other participants in the training programs, Canada has “the biggest training boots on the ground footprint of the five partners, both in overall numbers, but also in terms of geographic reach.”

Canada is also the only military mission with a relationship with the National Guard, which is more open to change than the regular army and Canadians have “a cultural and spiritual empathy with the Ukrainians.”

Panelist Ivanna Plakhotnyuk, an instructor with Operation Unifier, the project under which Canadian personnel train members of the Ukrainian Armed Forces said military reform has been one of the most successful reform programs in Ukraine.

“That was amazing how the army that was in almost total decay in 2014 when the aggression started rediscovered their capabilities… (and) was recently ranked as number 25 in the most capable armies of the world.”

The Canadian mission was the one treated most favourably by Ukrainians because they brought a human approach.

Gengalo elaborated on that point noting that Ukrainians appreciated the fact Canadians treated them as equals and were not afraid to admit their mistakes when necessary.
As Ukrainian soldiers told him back in the 1990s:

The panelists were introduced by Dr. Andrea Charron, Associate Professor and Director of the Centre for Defence and Security Studies at the U of M.

Yuliia Ivaniuk, Coordinator, of the Centre for Ukrainian Canadian Studies moderated the discussion.