‘Pray for them’: A Canadian military chaplain reaches out to refugees fleeing war in Ukraine 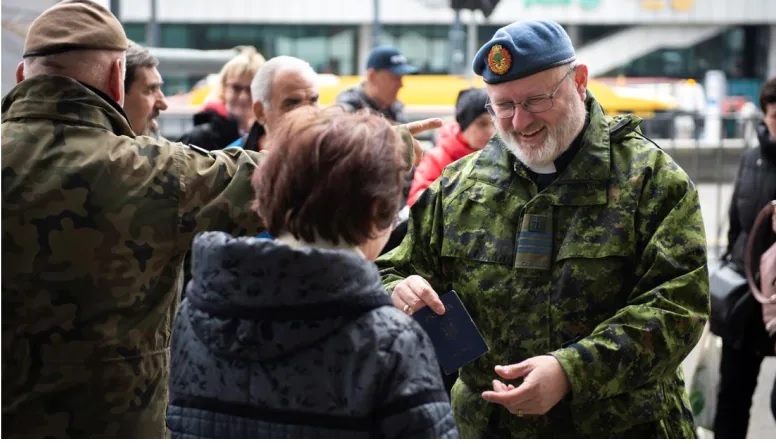 Lt.-Col. Terry Cherwick, (right) a Canadian forces chaplain, speaks to a Ukrainian refugee outside of the central train station in Warsaw. Three Canadian military chaplains are taking part in the deployment of 100 Canadian troops to Poland to help local authorities handle the influx of refugees fleeing the Russian invasion of Ukraine. (Canadian Forces Combat Camera)

What can you say to someone who has lost everything?

Standing in the grey light of a cold spring day outside Warsaw's central train station recently, Lt-Col. Terry Cherwick — with his black and white clerical collar jutting out of his combat uniform — seemed like a beacon for the bereft.

One of three Canadian military chaplains dispatched earlier this month as part of Canada's mission to Poland to help that country manage the influx of Ukrainian refugees, the Edmonton-based padre is performing a spiritual duty in deeply personal circumstances.

Cherwick is of Ukrainian descent himself and still has some extended family in the western part of the war-torn country. He said his early encounters with frightened and war-weary refugees in Warsaw — a flood of women, men and children shuffling through the cavernous, modern railroad station, mourning the dead and the wrecked homes they left behind — made a profound impression on him.