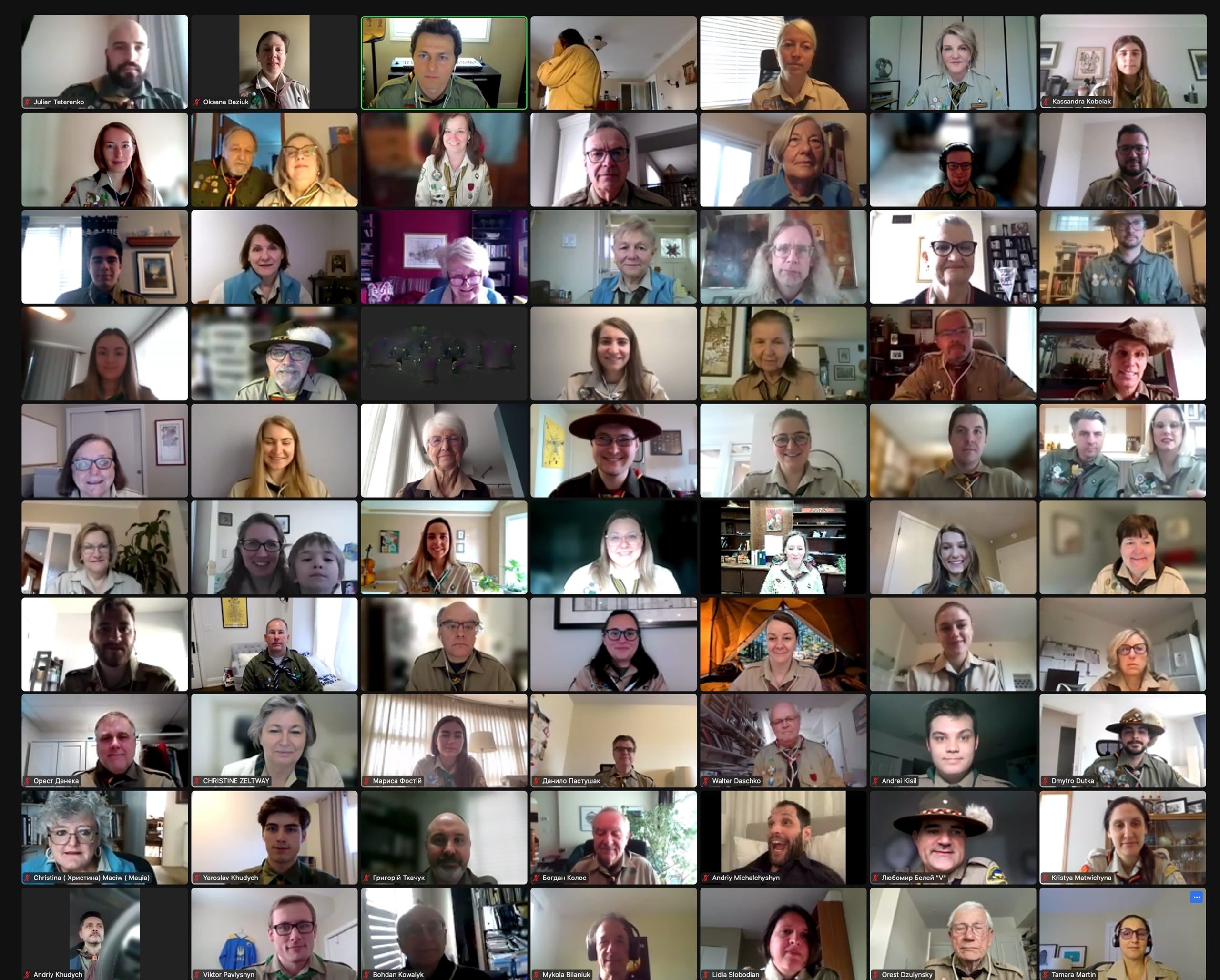 Toronto – Members from across the country had great anticipation in preparation for the Plast-Canada Annual General Meeting in April by video conferencing.

This year It was quite a new experience going into the meeting. First, the country was beginning to get over the restrictions and social isolation of the COVID epidemic. Second, Plast representatives were unexpectedly stunned by Putin’s aggressive and vicious unprovoked invasion of Ukraine.

Members of the gathering were told that over a thousand members of Plast Ukraine had volunteered either into the regular Armed Forces of Ukraine (ЗСУ) or others were signed up for the territorial defense and waiting for their assignments. In addition, many volunteer for logistical support and deliver humanitarian aid to those who need food or medicines in all oblasts.

Ukrainians worldwide continue to be on an emotional roller coaster: listening to disastrous news one day and then rejoicing at the small rays of hope. To help Plast leaders, members, and displaced Ukrainians in Canada cope with the range of emotions, organizers planned a session with a professional guest speaker.

Ivanna Bilak – a Plast member, a Registered Psychotherapist, and a Mental Health Professional – presented how Plast counsellors should interact with young people in their care and with displaced families that have just fled from Ukrainian war zones.

Many different emotions could be present when dealing with people who have left a war zone, and the counsellors need to be prepared to deal with them or know where to direct them, she said.

A counsellor needs to provide a safe place, be welcoming and provide rest and nourishment. When talking with a young person, “be brief and reassuring” and “validate their emotions.” Ms. Bilak said.

“We should avoid broad stroke descriptions or generalizations about war. She said that there is nothing to be gained in showing graphic images of the evils and destruction,” she said.

Instead, Plast programming should provide some forms of recreation and escape from the trauma, she said.

As Ivanna Bilak said in conclusion regarding Plast youth activities, “Keep focusing on what is being done and what can be done. Mobilize activities to do together and stay positive. Ukraine needs us.”

There was a general agreement among members of the annual meeting that Plast in Canada needs to prepare its counsellors to deal with the inevitable influx of displaced families seeking integration into Ukrainian Canadian community organizations.

Those members have already found different ways of helping Ukraine. Some Plast branches, such as the one in Edmonton, have raised $100,000 for humanitarian aid that has been shipped to Ukraine.

Other branches have continued to work with the Ukrainian Canadian Congress and Canada-Ukraine Foundation, Plast financial initiatives, the ‘Help Us Help’ organization, the Canada Humanitarian Fund, and local churches. Some have worked to gather supplies for the Dzherelo Rehabilitation Centre in Lviv. Others have made financial donations to many other Ukrainian and Canadian organizations eager to support Ukraine’s fight for freedom.

Towards the end of the Annual General Meeting, the new Plast executive was elected for 2022-24. Daria Horbay from Edmonton was re-elected to another term as the President of Plast Canada – National Executive, and Bohdan Kolos as Chair of the Audit/Advisory Board (Rada). Lubko Belej from Toronto was elected Vice-President, Olena Coba as Treasurer, and Daria Kowalyk Corporate Secretary.

The membership resolved to continue working to aid Ukraine in its ongoing struggle to repel the invaders, regain peace, rebuild, and bring humanitarian aid and prosperity to our ancestral homeland.

The participants of the AGM supported the continued assistance to Ukraine in its struggle with the invaders to victory, restore peace and the delivery of humanitarian aid to the population and the country’s reconstruction.

The newly elected President of Plast Canada, Daria Horbay, concluded: “We have significant challenges and great opportunities. Our success in Canada will require patience, dedication, and cooperation. Our joint efforts to help Ukraine and Ukrainians are essential and necessary in this time of crisis.

Victory in Ukraine is our goal, and all our efforts in Canada are bringing Ukraine closer to that goal.”