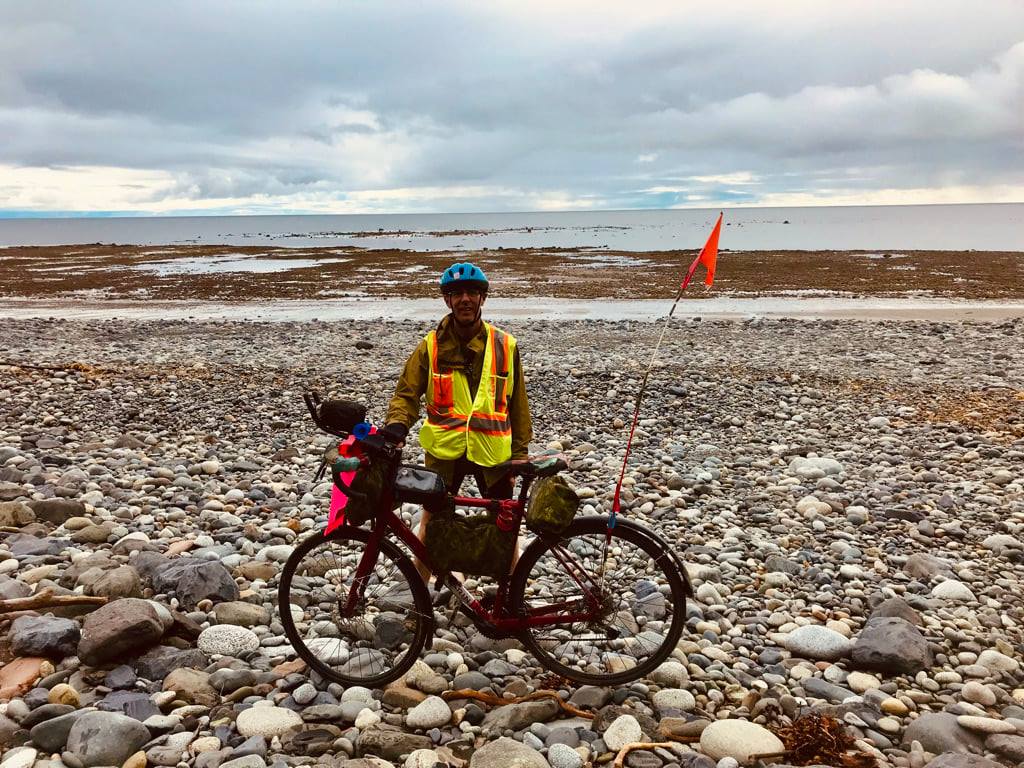 Fr. Ivan Nahachewsky is now back to work at the Saskatoon Eparchy of Ukrainian Catholic Church and is grieving the end of his Padre Bike Ride. He called the ride, which aimed to collect the funds to buy wheelchairs for those in need in Ukraine, a success both from the charitable standpoint and as a unique adventure that he was lucky to have during his vacation.

The 58-years-old Ukrainian Catholic priest, a 4th Degree Knight of Columbus and Military Chaplain, planned to have a 2,000-km bike ride through Saskatchewan’s north in July. Because of the forest fires in the region, after 1,200 kilometres, Fr. Nahachewsky had to go somewhere else for his last 800 kilometres. To complete his plan, he did 300 km in Alberta and 500 in British Columbia. The ride started at Cluff Lake in northern Saskatchewan and ended at Graham Island in the Pacific.

As of Monday, August 13, the ride collected over $33,000. The initial goal, $250,000, was quite ambitious. The collection is still underway and will continue until the end of September. Fr. Nahachewsky said that he is “very very happy” with the current number: “That’s 150 wheelchairs for Україна which will make a big difference for many people’s lives. Even though we have not yet met the goal that was advertised, I’m very satisfied – it’s way bigger than my personal goal that I expected”.
The idea to send wheelchairs to Ukraine and help the Dzherelo Wheelchair Repair Workshop in Lviv came to Fr. Nahachewsky when he was a chaplain in the 8th Rotation of Operation UNIFIER (Canada’s military training mission in Ukraine) in the first half of 2020, right at the beginning of the pandemic.

One of his jobs as a chaplain was to create and develop relationships with the local community. Since the beginning of Operation UNIFIER in 2015, the Canadian staff has been assisting the Dzherelo Rehabilitation Centre for children. During their six-month rotation, Fr. Nahachewsky and his soldiers visited Dzherelo eight times. “We were very pleasantly surprised at how beautiful they are and how they work and how they help so many people change their lives. Everything was really positive,” he said.

When Fr. Nahachewsky got home, he continued to keep Dzherelo in his heart, and when the fundraiser opportunity for Ukraine came up, he wanted Dzherelo to be among the recipients.

Apart from its charitable cause, the ride presented Fr. Nahachewsky with an opportunity to reflect upon nature and God: “In every province that I visited, there is an absolute beauty. I call it Earth, Sun, Sky and Sea. They’re all so beautiful and there are so many ways to connect to God through nature”.

On the eve of the 30th anniversary of Ukraine’s Independence, Fr. Nahachewsky had this to say to the Ukrainians in Ukraine: “Even though I am a Canadian of Ukrainian descent, I strongly feel a relationship with Ukraine. I have witnessed that Canada and Ukraine have a good solid relationship and we will continue to be partners into the future”.