Oseredok Ukrainian Cultural and Educational Centre: a community crossroads where the past informs the present and inspires the future

Sometimes, we lose sight of the lasting meaning of community institutions in our midst, but, thankfully, life has a way of jogging our memories. I recently had just such a motivating reminder when revisiting Winnipeg’s iconic Oseredok Ukrainian Cultural and Educational Centre to search through the archives of distinguished Ukrainian writer, poet, children’s author, editor, pedagogue, PLAST leader, and community activist, Alexandra (“Lesia”) Chraplywa-Schur (who, at 94, currently resides in Toronto). I had last done research at Oseredok in 1984 in preparation for the 50th Anniversary of the Ukrainian National Youth Federation of Canada. Oseredok was a tremendous resource then, and it continues to be even more so today, nearly 40 years later. The fundamentals of this important and bountiful community resource centre have remained steadfast: one of the largest Ukrainian Canadian archival collections in Canada, a library, museum, art gallery, exhibitions, and special events. 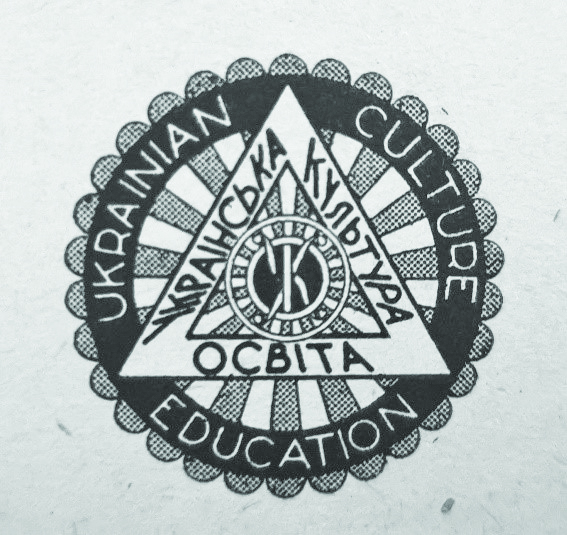 Oseredok continues to be faithful to the goals and objectives set out by its founders in the Ukrainian National Federation of Canada (UNF) in 1944: to consolidate efforts from throughout the Ukrainian Canadian community for the development of Ukrainian culture and education in Canada; to represent Ukrainian cultural heritage in Canadian culture; and to achieve constructive cooperation of Ukrainians with representatives of other ethnic groups in Canada and abroad. The featured initiatives of the Centre originally included acclaimed higher education courses for Ukrainian school teachers and other professional courses; the creation of a Ukrainian book collection, a museum and an archive; the popular journal series “Culture and Education”; dissemination of information about Ukrainian culture and Ukrainians in the world; as well as educational scholarships for talented young Ukrainian Canadians. (Demonstrating great foresight, the very first scholarship was in the princely sum for that time of $500 to support Ukrainian students seeking to pursue Slavic studies, journalism, or international law. It was funded through a donation from the Ukrainian Liberation (Penny) Fund of the UNF of Canada.) Illustrious members of the Ukrainian Canadian community affiliated with the UNF, like Dr. Oleksandr Koshetz, Tetiana Koshetz, Dr. Pavlo Macenko, Dr. Tymish Pavlychenko, Senator Paul Yuzyk, and others were all involved in the realization of Oseredok, which initially operated under the auspices of the UNF of Canada. Then UNF National President and co-founder of the Ukrainian War Veterans Association of Canada, Wolodymyr Kossar, served as first president of Oseredok’s Board, and UNF National Executive member Dr. Tymish Pavlychenko as its first secretary. (Dr. Pavlychenko was one of the first professors of Ukrainian descent in Canada and, together with W. Kossar, one of the initiators of the Ukrainian Canadian Congress (then, Committee). Oseredok was originally located at the UNF hall on Main Street before moving to its present location at 184 Alexander Avenue in 1974, which until that time was The New Pathway Publishers Building (the newspaper of the UNF of Canada). 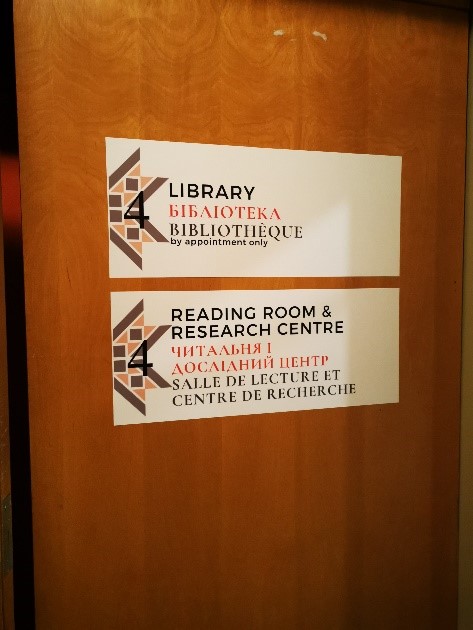 Today’s Oseredok is just as engaged and engaging, innovative and impactful. It houses everything from folk art to fine art, archival photographs, memoirs, icons, military decorations, musical instruments, ceramics, embroidery, ceremonial breads, original folk clothing, Easter eggs, and features its own artisanal boutique, as well as important books and documents from the collections of key figures in politics, the arts, economics, literature, and community life (I. Bobersky, V. Avramenko, D. Humenna, S. Dzyuba, O. Koshetz, P. Macenko, M. Mandryka, E. Onatsky, B. Panchuk, Ye. Chraplyvyj, M. Marunchak, Ye. Konovalets, the World Federation of Ukrainian Political Prisoners, the Central Ukrainian Relief Bureau in London (UK), and many other invaluable fonds). The opportunities are great for new generations of Canadians of Ukrainian descent (and not only), born in Canada or new Canadians, students, researchers, scholars, and visitors from around the globe to discover the living legacy of Oseredok’s holdings. 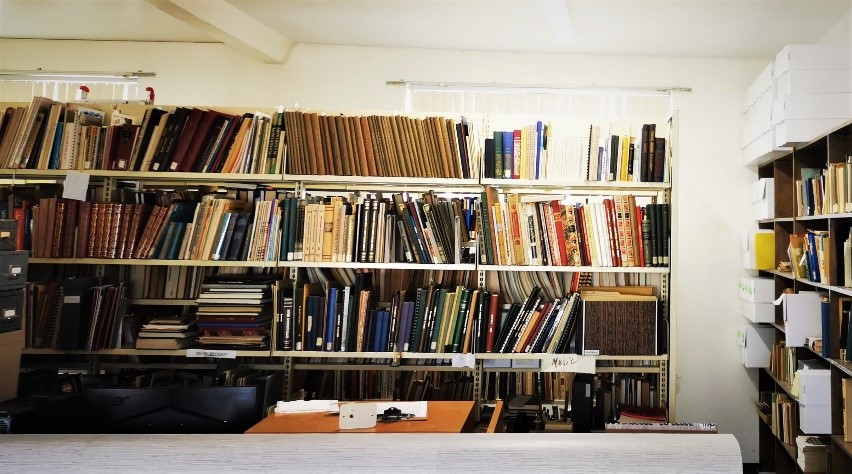 My recent trip to Oseredok was related to the book I am helping to prepare on occasion of the 75th anniversary of the Association of Ukrainian Writers for Children and Youth. I received excellent professional support: all relevant archives were pulled and readied for my arrival and various staff checked with me throughout my stay to see what else I might need. I am most grateful to Alexandra Shkandrij, Curator of Collections and Exhibits, for her attentive and enthusiastic assistance, to the experienced local scholars and volunteers (Orest Martynowych, Zenon Hluszok), as well as to the young people (summer students and interns, Ukrainian and non-Ukrainian), who showed genuine interest in my work and a willingness to help in any way. In fact, I was impressed by all the individuals now on staff at Oseredok, nearly all of whom are young, dedicated, and excited about their work. Among them are new immigrants to Canada, as well, who are proud to be part of this foundational community institution, with a nearly 80-year history and a limitless future. 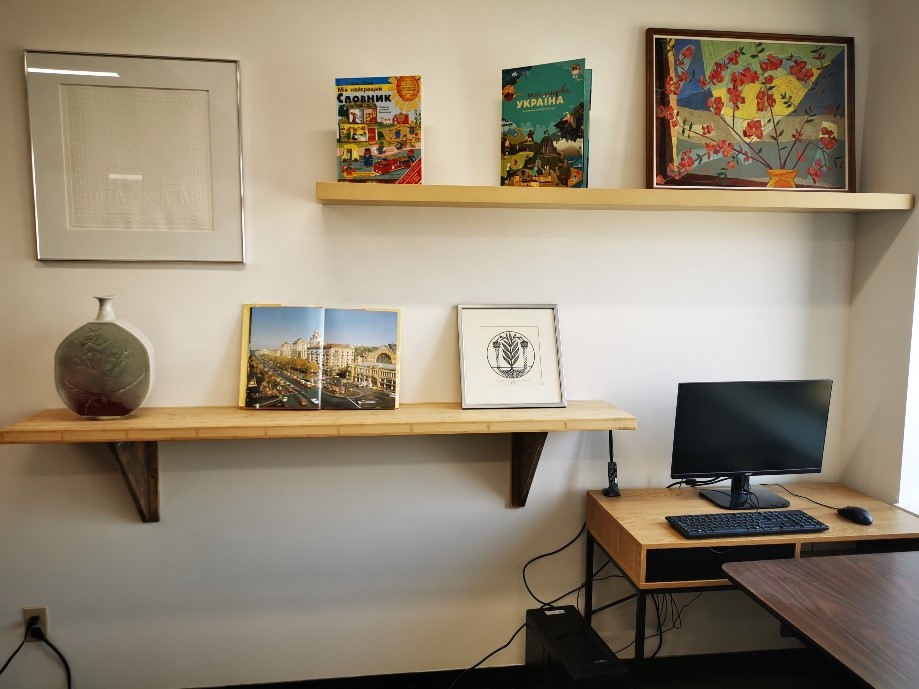 While weathering the recent COVID-19 pandemic with dignity and determination, Oseredok has concurrently been undergoing renovations, including the transformation of a section of the library into a Reading Room and Research Centre to serve as a user-friendly exploration setting for youngsters and their families, a unique learning environment for school groups, and to facilitate access to Oseredok’s expansive archives and rare book collection for researchers and the broader public. The official launch of the Reading Room and Research Centre took place on August 18, 2021. I had the privilege of being the first researcher to use this new, impressive space.

Immersed as I was in the rare holdings of Oseredok, I came to appreciate even more the essential need to support community archives, which offer a bridge from the past through the present into the future. Oseredok has begun to digitize access to its collections through the Manitoba Archival Network and hopes to expand its available information here soon: https://main.lib.umanitoba.ca/. Oseredok’s unique and important collection deserves our support. Consider donating to the Archival Fund (https://oseredok.ca/archive-fund/), so that you, those around you, and interested individuals from around the world may continue to appreciate the ongoing contribution of our Ukrainian heritage (https://oseredok.ca/).