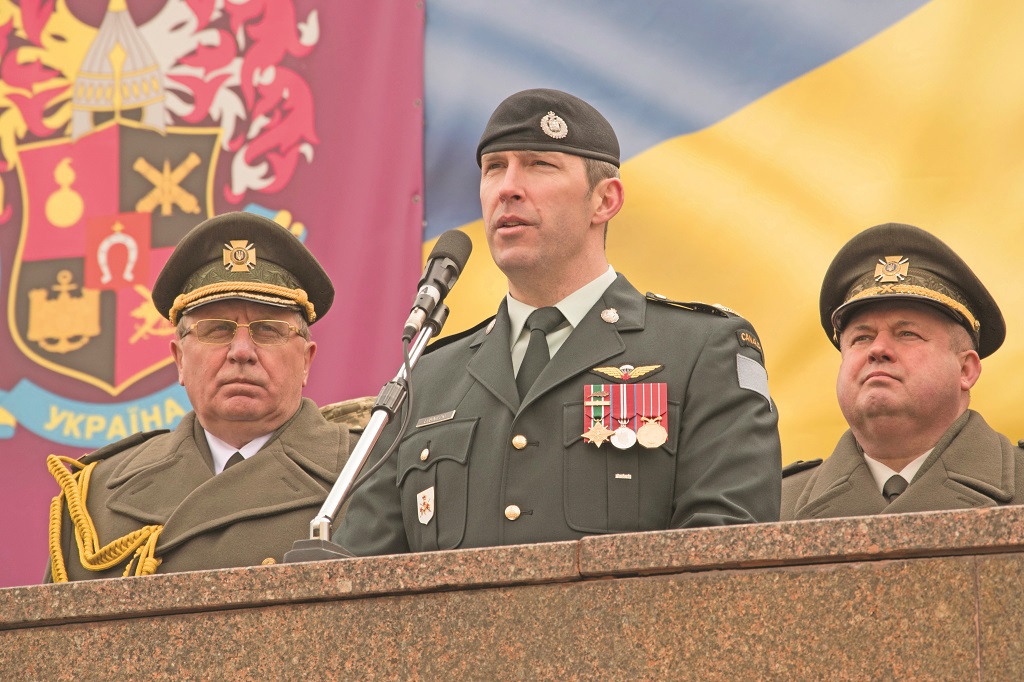 Operation Unifier is making great strides in that Ukrainians are now able to pass on the training they have learned from their Canadian counterparts on to their own rank and file, says the commander of Joint Task Force-Ukraine (JTF-U)

“The Ukrainians are stepping forward in a great number of areas,” Lieutenant-Colonel Mark Lubiniecki, who took over the command of Operation Unifier from Lieutenant-Colonel Wayne Niven in March, told New Pathway-Ukrainian News in an exclusive telephone interview from Starychi, Ukraine, August 5.

“They’ve got the confidence. They’ve spent time in the anti-terrorist operation zone and they’re coming back with confidence in the lessons that they’re learned and the experience that they have gained and they’re looking to share that with their peers, their fellow armed force soldiers and we look to share with them as peers as well,” he added.

“So that’s really given us the opportunity to sit back and empower the Ukrainian instructors and their own leaders to take the forefront in training delivery to their own soldiers and allow us to provide some feedback and provide options and really let them take the ownership of their training. They are an extremely professional and well-motivated military,” noted Col. Lubiniecki.

He described the Ukrainians he deals with as “tough soldiers”, who are “willing to learn and certainly patriotic”. Ukrainian forces are moving towards NATO-inter-operability by 2020. Armed forces do not have to be part of NATO to become inter-operable, he explained, but it allows them to have shared structures, and shared tactics which allow them to operate alongside other countries that are NATO members.

Operation Unifier is the Canadian Armed Forces (CAF) mission to support Ukrainian armed forces in Ukraine. The operation’s focus is to assist them with military training. This will help them improve and build their military capacity. The CAF coordinates its training with training by the U.S. and other countries that help in the same way.

During his visit, Gen. Wynnyk noted how both side are benefitting from the operation.

“In speaking with our soldiers, the Army Sergeant Major, Chief Warrant Officer Alain Guimond and I were told time and again of the deep appreciation our members have to be a part of this significant mission. This is a mutually beneficial relationship where, in addition to providing training to Ukrainian soldiers, we are also learning from our Ukrainian counterparts based on their recent experiences,” Wynnyk told Ukrinform.

Col. Lubiniecki echoed that assessment. Among some of the things Canadians have learned from Ukrainians are small unit tactics that they were taught by the Soviets, as well as how to deal with hybrid warfare, cyber warfare, and electronic warfare.

“That’s what allies do for one another. They share lessons learned… That’s certainly what occurs between Ukrainians and Canadians,” he said.

Col. Lubiniecki described hybrid warfare as a complete combination of conventional -type trench warfare where you have two opposing forces face to face on the ground, similar to World War I or World War II … with small arms, conventional type weapons” to which you add “the latest in technology, where you’re dealing with deployment of drones which sight, identify and target your position.”

“It includes electronic warfare where you’re now bringing in the ability to target individual soldiers’ cellphones and push out massive texts and emails with your own propaganda” as well as shutting down power grids.

“The information that is being shared by Ukraine with Canadians and with other NATO allies is extremely timely and extremely critical for our future development,” he added.

But “at the end of the day, the conflict is still won by the soldiers on the ground and technology is technology and can certainly play a part, but what we’re seeing right now is that the Ukrainian Armed Forces are able to stand up and to defend their borders, maintain their mission within the ATO (Anti-Terrorist Operation).”

Approximately 200 Canadian forces take part in the training. There have been three rotations since the operation was started in March, 2015. The current rotation is mainly from the 3rd Canadian Division, based in Edmonton.

As of July 1, 2017, JTF-U has trained more than 4780 Ukrainian soldiers. There have been more than 111 course serials that covered all types of training.

Chief among these are tactical soldier training, also known as small team training. It consists of: individual weapons training, marksmanship movement in areas of potential conflict, explosive threat recognition, communication in troop movement and command and control, survival in combat and ethics.