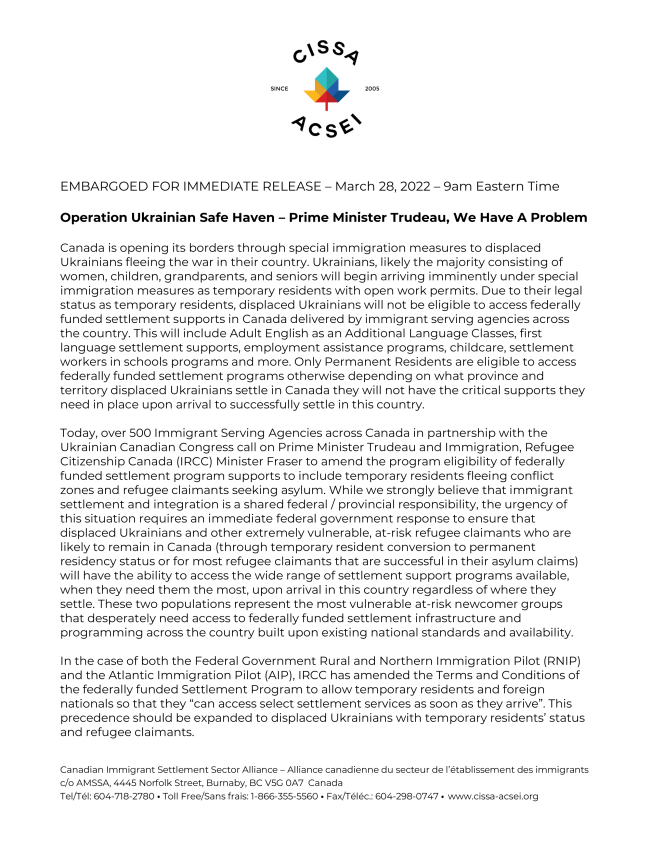 The Ukrainian Canadian Congress is sharing this news release on behalf of the
Canadian Immigrant Settlement Sector Alliance (CISSA):

Canada is opening its borders through special immigration measures to displaced Ukrainians fleeing the war in their country. Ukrainians, likely the majority consisting of women, children, grandparents, and seniors will begin arriving imminently under special immigration measures as temporary residents with open work permits. Due to their legal status as temporary residents, displaced Ukrainians will not be eligible to access federally funded settlement supports in Canada delivered by immigrant serving agencies across the country. This will include Adult English as an Additional Language Classes, first language settlement supports, employment assistance programs, childcare, settlement workers in schools programs and more. Only Permanent Residents are eligible to access federally funded settlement programs otherwise depending on what province and territory displaced Ukrainians settle in Canada they will not have the critical supports they need in place upon arrival to successfully settle in this country.

Today, over 500 Immigrant Serving Agencies across Canada in partnership with the Ukrainian Canadian Congress call on Prime Minister Trudeau and Immigration, Refugee Citizenship Canada (IRCC) Minister Fraser to amend the program eligibility of federally funded settlement program supports to include temporary residents fleeing conflict zones and refugee claimants seeking asylum. While we strongly believe that immigrant settlement and integration is a shared federal / provincial responsibility, the urgency of this situation requires an immediate federal government response to ensure that displaced Ukrainians and other extremely vulnerable, at-risk refugee claimants who are likely to remain in Canada (through temporary resident conversion to permanent residency status or for most refugee claimants that are successful in their asylum claims) will have the ability to access the wide range of settlement support programs available, when they need them the most, upon arrival in this country regardless of where they settle. These two populations represent the most vulnerable at-risk newcomer groups that desperately need access to federally funded settlement infrastructure and programming across the country built upon existing national standards and availability.

In the case of both the Federal Government Rural and Northern Immigration Pilot (RNIP) and the Atlantic Immigration Pilot (AIP), IRCC has amended the Terms and Conditions of the federally funded Settlement Program to allow temporary residents and foreign nationals so that they “can access select settlement services as soon as they arrive”. This precedence should be expanded to displaced Ukrainians with temporary residents’ status and refugee claimants.

Although some, but not all, Provinces and Territories provide limited funding to support over 800,000 Temporary Residents annually in Canada (International Students, Temporary Foreign Workers, Seasonal Agricultural Workers, and Refugee Claimants), we cannot expect Provinces and Territories to quickly replicate federally funded settlement programs including English and French as an Additional Language classes for displaced Ukrainians where they currently do not exist.

“Many Ukrainians fleeing the war will arrive traumatized, in need of much-needed support to help them transition to this country. Ukrainians need to be able to access settlement programs regardless of their legal status,” Ukrainian Canadian Congress – President, Alexandra Chyczij.