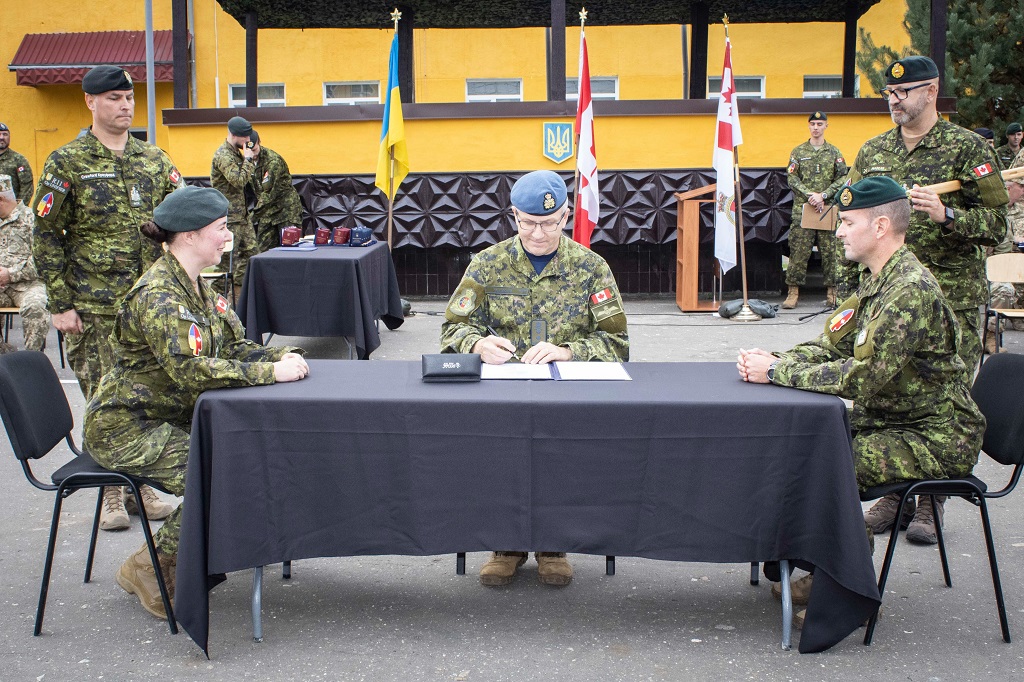 The International Center for Peacekeeping and Security held an eleventh transfer of command authority ceremony for Operation UNIFIER in Ukraine.

On Sept. 30, LCol. Melanie Lake, the departing commander of Joint Task Force – Ukraine, passed the torch to LCol. Luc-Frédéric Gilbert, who took over the ongoing Canadian efforts to support the Security Forces of Ukraine.

The deployment had a very uncertain beginning, LCol. Lake said during a presentation on Op. Unifier mission update, hosted by the Ukrainian War Veterans Association, Oct. 5. The company deployed towards the end of March 2021, right in the middle of the third wave of COVID-19. Upon arrival, LCol. Lake tested positive for COVID and immediately went into quarantine.

The personnel from 46 different units across the country received their pre-deployment training virtually, and the minute they hit the ground in Ukraine, the task force spread out over 15 locations. There were many members of the team who had not had a chance to meet face to face, she said. On top of that, a word came from the mission’s European command that Russia was building significant forces up on the Belarus border.

“Our personnel were rapidly going into isolation,” LCol. Lake said, “at the same time as we were trying to understand what Russia’s intentions were, and what it meant for our task force.”

“It really drove home the threat that Ukraine is dealing with on a daily basis, the existential threat, and made it very clear to our personnel why we are here and why it was so important, the work that we had to do to help Ukraine and the security forces of Ukraine prepare for this continuous threat.”

To understand NATO interoperability, LCol. Lake said that it’s important to understand values that connect NATO allies. She mentioned common leadership philosophies, embrace of mission command, the aim to empower leaders at all levels, maneuvers approach, command team approach. These are all the things that help NATO countries understand each other.

“Putting all of this together, communicating it through a common language, offers a really powerful tool to counter Russian influence,” LCol. Lake said.

LCol. Lake, Commanding Officer of Second Combat Engineer Regiment, completed her command rotation in Ukraine and has returned to Canada on Oct. 2. She led Operation Unifier’s line of effort one – the security force capacity building component, run by Canadian Joint Operations Command. Line of effort two is focused on security sector reform, and that is spearheaded largely by Associate Deputy Minister of policy.

“At the base level, at the ground level, this stuff works,” LCol. Lake said. “And there is very little when it comes to interoperability that can’t be overcome with will, desire and some deliberate planning.”

“Interoperability” is a bit of a vague term, she said. At the strategic level, there are 46 partnership goals that have been agreed upon between Ukraine and NATO. Down at the tactical level, that looks very different, a lot more tangible.

Front one is influencing the change in mindset and values through professional military education reform. Part of the team dispersed through multiple officer academies, teaching and developing leadership curriculum and shaping the next generation. They tried to tackle more difficult concepts to understand that can’t be distilled into a checklist or an algorithm.

“If you can give the security forces of Ukraine a clear algorithm and path to reform, they nail it,” LCol. Lake said. “It’s the more human side, the mindset piece that’s a little more challenging.”

Still, LCol. Lake described a gap between noncommissioned officers and officers in the Ukrainian army as compared to the Canadian Army.

“The gap is not necessarily in the competence of the senior NCO,” she said. “The gap is in recognizing and then being willing to take the risk of delegating responsibility to them.”

LCol. Lake, together with her Sergeant Major, had the chance to speak at the strategic seminar to the General Staff back in April. They talked about the benefits to operational effectiveness that come from empowering the NCOs.

“The NCO Corps is rising, and they will be ready when we’re able to convince the officer corps of the value that they bring, and to delegate authority and responsibility to them,” she said. “Still, there are a lot of old mindsets still present.”

“Blaming is a huge part of the problem,” she said. “You know, this culture of punishment when something goes wrong, it’s not about finding out what we need to do to make sure it doesn’t happen again. There’s a tendency to go towards ‘who do we blame?’ and that stifles initiative. It crushes trust and it results in people just not being empowered, whether that’s junior officers, or senior NCOs.”

LCol. Lake thinks that the CAF are having a real impact in terms of changing some of these mindsets.

“We show up when it matters,” she said. “We were there on the grounds when the build-up was happening. Although we are an unarmed training mission, there is certainly a deterrence value that comes from this. We were there for the 30th anniversary walking down the Khreshchatyk with the rest of the free world, showing that Ukraine is not alone in this fight and we are there with them.”

“The broad challenges to reform is obviously the fact that they are at war, and they are trying to change so much while fighting on a daily basis,” LCol. Lake said.

When talking about lessons that Canadian troops have learned from Ukrainian ones, LCol. Lake said that there is so much that the Canadian Armed Forces can learn from the Ukrainian Armed Forces. Some of these include how much of a focus the Ukrainians put on cam concealment and dispersion in operations, how much they recognize the threat from the air, and the combination of UAV and artillery, and the innovative ways that they are countering the UAV threat.

Another one is how well civil society and the Armed Forces work together.

“I know so many of the NGOs, even ones from Canada, who stepped up to supply equipment and training back in the early days of the conflict, when the forces simply didn’t have it,” she said.

She also said that there is a lot of capability development going on side by side between civil society and the armed forces. This is something that Canadian military often neglects.

“These are some of the lessons that I’m taking back to my regiment.”

LCol. Lake said that from this mission she is sending home empowered, confident junior leaders who are coming with all kinds of skill sets that the Canadian military needs right now to revamp individual training system. The CAF is trying to rebuild from COVID and drive culture change. These leaders are coming back with six months of absorbed lessons that they’ve learned about the adversary, all those things that Ukraine has learned in blood.

“We kept saying, while we were there on the ground, that we might not be there with you on the battlefield, but I sure hope they know that we are firmly behind them,” she said. “And I think our team certainly is all walking away as staunch supporters of the cause of Ukraine and the Ukrainian Armed Forces, the security forces at large.”

For more than seven years the Ukrainian people have been at war, defending their country against Russia’s ruthless aggression. In the first days and weeks of the Russian invasion, in 2014, the Ukrainian armed forces were unprepared and unequipped to defend Ukraine. But that quickly changed. In a very short time Ukraine’s military underwent profound transformation and became a fighting force that Ukrainians take great pride in.

That transformation has in no small part been aided and assisted by Canadian Armed Forces personnel, who, since 2015, have deployed many times to Ukraine as part of Operation Unifier. Some 25,000 Ukrainian servicemembers have benefited from the training provided by Unifier. In turn, Canadian personnel have learned lessons from their Ukrainian colleagues about defending against hybrid warfare. Both Ukrainians and Canadians were very proud of the relationship that has developed between Canada’s and Ukraine’s armed forces.

“It is in times of turbulence and trouble that one finds out who one’s true friends are, and it is a great comfort to our community that Canada is indeed a true friend to Ukraine,” said Alexandra Chyczij, UCC President, during the introduction.

Since the beginning of Russian aggression Ukraine has decreased combat losses almost in 10 times, with the support of international allies, and especially Canada. As Ukraine further integrates forces and defence structures with the West and with the NATO allies, the community looks forward to hearing more updates and suggestions on how Canada can help.