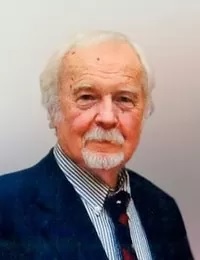 Taras Hukalo was born on March 12, 1933 to Andrey and Evdokia Hukalo in Montréal, in the second year of the genocide – Holodomor of Ukraine. He was named in honor of the 119’th anniversary of the birth of Taras Shevchenko. Taras used to say he was born when his people were dying in the Holodomor, so, his mission in life was to tell others of the tragedy and accomplishments of his people.

On July 30, 2022, Taras passed away as his people were once again dying in their quest for freedom (today’s Russo-Ukrainian war). Taras stubbornly gave himself to the task, to the extent that he never raised a family. Not knowing something did not stop him, it just gave him a reason to learn something new. With that tenacity, as producer-director and on-camera personality, he produced 1500 hours of viewing time of Montreal’s Tele-Ukraine, a weekly hour long television program telecast on CF cable and Videotron’s Television ethnique du Québec (1990-1997). He also produced a series of TV documentary films about Ukrainians with Radio Québec including, the world’s first documentary film in 1983 on the Holodomor – “The Unknown Holocaust”. Shortly after Ukrainian Independence, Taras helped initiate the first live satellite link between Canada and Ukraine and aided Ukraine in getting its unique country code, +380. In 2009, with the cooperation of the Ukrainian Ministry of Culture, he went on to spearhead a poster project about millennia of accomplishments and world contributions of Ukraine and Ukrainians, which became a highlight of Montreal and Toronto’s annual Ukrainian festivals. For his efforts he was recognized by the Ukrainian Government and became known by many movers and shakers in Ukraine and beyond, including Ukraine’s first ambassador to Canada, Levko Lukyanenko. In 2009 “The Unknown Holocaust” film was broadcast nationally in Ukraine as part of the national commemoration of the victims of the genocide. He was honored by the Ukrainian government and the National Holodomor Memorial in Kyiv, and spoke at several institutions in Ukraine including the Kyiv-Mohyla University, Ostrozka Academy, the universities of Chernihiv, and Nizhyn, as well as at many elementary and high schools. He will be sorely missed by the Ukrainian community here and worldwide.

A Funeral mass will be held at St.Sophie Ukrainian Orthodox Cathedral, 6255 Bd Saint-Michel, on Monday August 8, at 9:30 a.m.