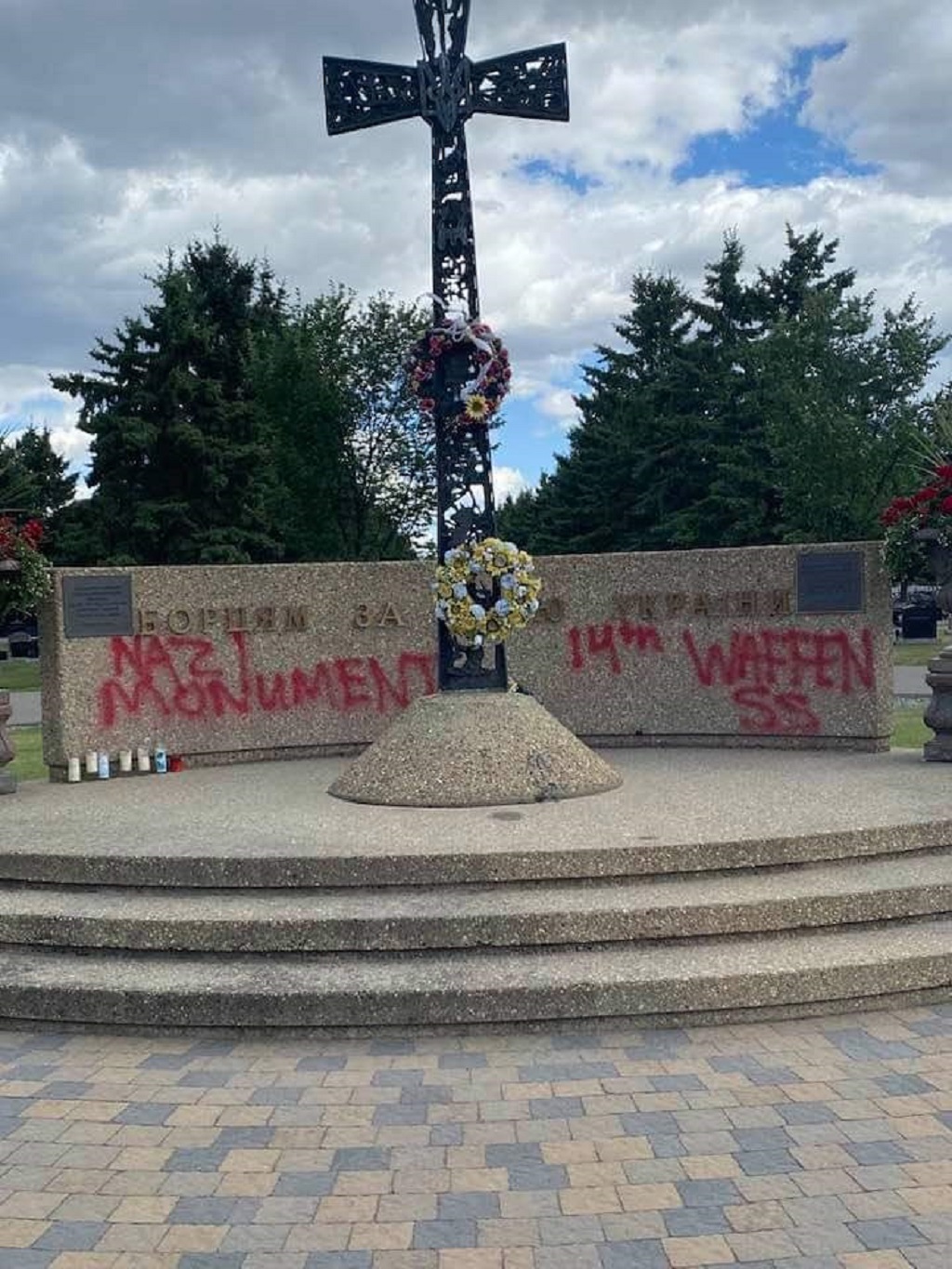 During the night of Monday, August 9 to Tuesday, August 10, a vandal or vandals desecrated two Ukrainian monuments in Edmonton. One was the bust of Roman Shukhevych at the Ukrainian Youth Unity Complex which had the words “Actual Nazi” smeared in red paint. The other was the monument to fighters for Ukraine’s freedom at St. Michael’s Cemetery which was covered with the words “Nazi Monument Waffen SS”. This particular monument was incorrectly referred to as “a memorial… to Ukrainian soldiers who fought in Nazi units” by the Edmonton Journal, and “a memorial honouring the 14th Waffen SS Division” by CBC. This, despite the fact that the words on the monument state “Бoрцям за вoлю Украïни”, which translates as “For those who fought for Ukraine’s Freedom”. It does not specify the Galician Division, nor does it specify any other military unit, but ALL the people who fought for Ukraine’s freedom. This includes everybody from the knights of medieval Kyivan Rus who defended the rest of Europe from nomadic hordes to those regular and volunteer soldiers who today are defending Ukraine (and the rest of Europe) from the Muscovite hordes. And what is particularly striking about that monument is the giant cross that stands in front of the inscription. So, to call that a “Nazi Monument” is not only dishonouring everybody who has defended Ukraine for the last 1,000 years and more, but it is also spreading hatred against Christianity itself and all its faithful believers.

These acts of vandalism clearly appear to be orchestrated and the sequence of events leading to the coverage by the Edmonton Journal and the CBC News provides some clues. Long before anyone else posted any information about this hatemongering, photos of the vandalized monuments along with an article appeared on the website of the “Progress Report”, which describes itself as “an independent and proudly left-wing media project produced by Progress Alberta”. It also states: “Make no mistake our politics are far to the left of the Alberta NDP”. The Youth Unity Complex has recorded a video of both the act of vandalism by a masked culprit and that of a man, face uncovered this time, taking the picture that was sent to the Progress Report at 9am the morning of August 10. The Edmonton Police Service Hate Crimes and Violent Extremism Unit is investigating.

The Progress Report’s story was in turn picked up by the Friends of Simon Wiesenthal Center (FSWC) in Toronto who called for the removal of both monuments. It was this release that became the source for both the Edmonton Journal and CBC News in what can only be described as very sloppy journalism. Both outlets took the Wiesenthal Center’s description of the cemetery monument as one which honored SS veterans at face value despite the fact that the inscription on the monument doesn’t mention any specific unit but all fighters for the freedom of Ukraine. In the case of the CBC News story posted on their website, this is particularly incompetent since they did quote from a statement by the Ukrainian Catholic Eparchy of Edmonton which said the translation of the inscription was “For those who fought for Ukraine’s Freedom.” This was buried deep in the story while the Wiesenthal’s disinformation was run right in the lead paragraph and in the caption below the picture.

And what about the fact that the Canadian “Commission of Inquiry on War Crimes”, headed by the Honourable Justice Jules Deschênes, in October 1986 concluded that there was no evidence of any war crimes committed by the Division?

Neither the Edmonton Journal, nor CBC News bothered to mention that most important fact. And it doesn’t take much effort to find that out. Just look for “14th Waffen Grenadier Division of the SS” on Wikipedia and there is a section on the Deschenes inquiry. That article also notes that in creating the Division, the Germans made two political concessions: “It was stipulated that the division shall not be used to fight Western Allies and would be used exclusively to ‘fight Bolsheviks’. The other concession was in that its oath of allegiance to Hitler was conditional on the fight against Bolshevism and in the fact that Christian (mostly Ukrainian Greek Catholic Church and Ukrainian Orthodox) chaplains were integrated into the units and allowed to function… The latter condition was instituted at the insistence of the division’s organizers in order to minimize the risk of Nazi demoralization amongst the soldiers. Indeed, Nazi indoctrination was absent within the division,” it stated.

In its response to the desecration of the Shukhevych monument the Ukrainian Youth Unity Complex attributed the continuous efforts to malign the Commander of the Ukrainian Insurgent Army (UPA) to Russian disinformation.

“That Soviet disinformation targeted the Ukrainian nationalist movement, labelling its leaders and members as ‘Nazis,’ ‘war criminals,’ ‘fascists’ and the like, is well-documented. This was a Communist propaganda staple for many decades. This ‘fake news’ effort has been resuscitated in more recent years by the KGB man in the Kremlin, Vladimir Putin, recently anointed as president-for-life of the so-called Russian ‘Federation’. This diversionary campaign has become ever-more acute following the illegal occupation of Ukraine’s Crimea and the Russian invasion of eastern Ukraine (February 2014) continuing to this day. An example is the October 14, 2017 tweet by the Russian Embassy in Canada about imagined Nazi war memorials in Canada. Simply put, Russia is at war to keep Ukraine out of Europe and is using every bogus trope available in its arsenal to defame Ukrainian defiance of Moscow’s imperial project. Sadly, the Russian fascists of today seem to enjoy the support of a few fellow travellers, hate mongers, and Ukrainophobes in the West,” it stated.

How true. Unfortunately, it appears to have no end. Purveyors of Russian disinformation continue to malign any Ukrainians who had the courage to stand up to Moscow to fight for their freedom and the media continues to take this disinformation at face value.