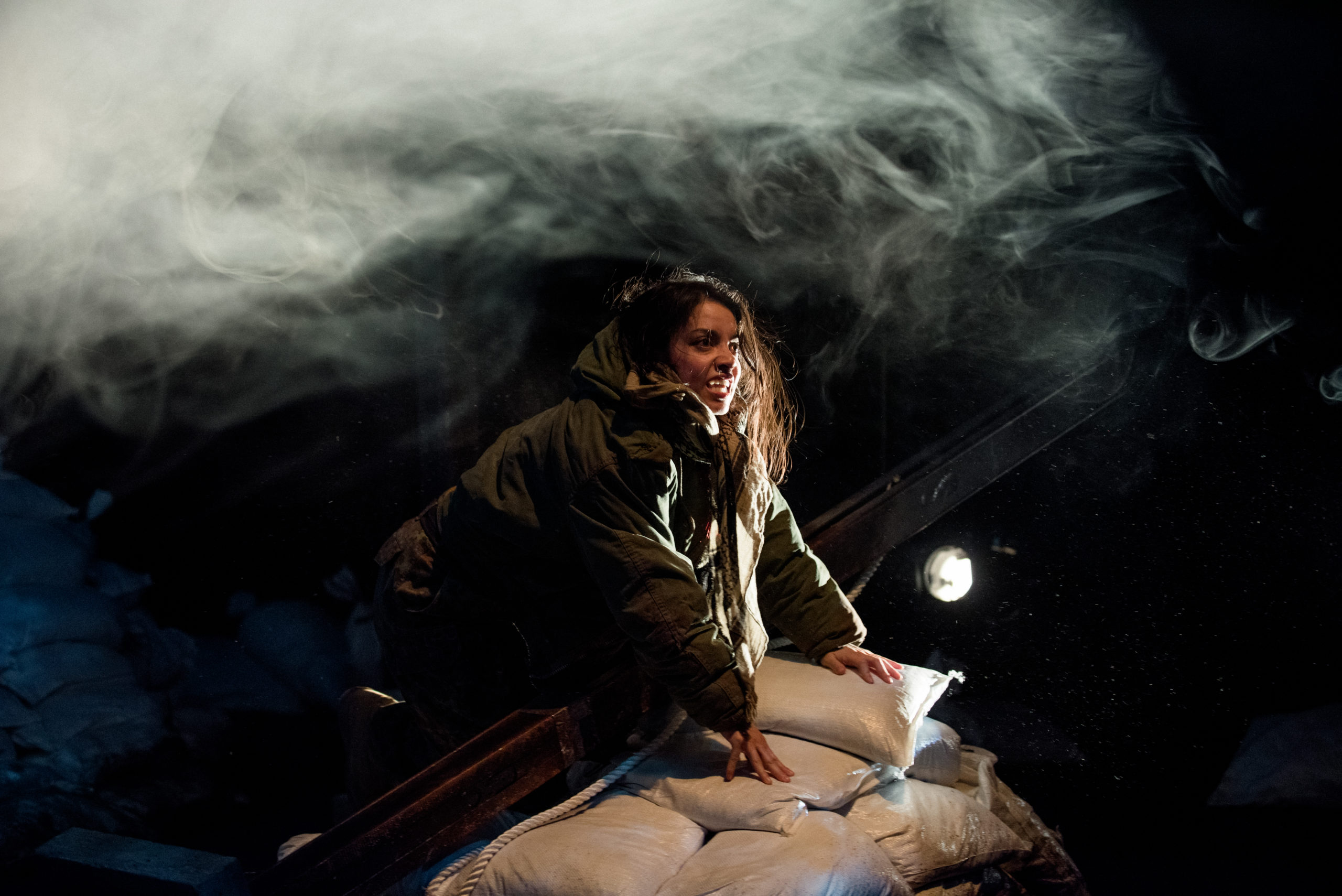 Playwright Lianna Makuch’s latest production, Alina, is a masterful tour de force that exposes the horrors of the Russian invasion of Ukraine in its stark reality.

Based on the true story of a 19-year-old volunteer Ukrainian combat medic who leaves everything behind to go to the front line of one of the deadliest battles of the war in Eastern Ukraine in 2015 — the battle for the Donetsk Airport – it is a gripping tale which captures and intensely holds the audience’s attention.

Most of this one-act play is stands out a one-woman performance with Christina Nguyen delivering a dramatic performance in the title role.

She goes through a gamut of emotions to bring about her poignant message set against a minimalist set, designed by Stephanie Bahniuk, of sandbags, rope and a single chair in Studio Theatre’s black box space.

The theatre itself is tiny which adds to the intimacy of the production which was directed Patrick Lundeen with dramaturgy by Matthew MacKenzie. Movement Direction is by Amber Borotsik, Electronic Composition by Noor Dean Musani and Video Design by Amelia Scott.

Alina’s mother, played with stoic restraint by Lora Brovold, appears towards the end, having abandoned her earlier reluctance to get involved, now encourages her daughter.

It closes with a moving soliloquy of hope for the future:

A future where we are strong.
Where this is not all for nothing.
I see a future worth fighting for.
Where no one can harm us when we are one.

Though written before the current full-scale assault began, it is nevertheless extremely timely.

Playwright Lianna met Alina Viatkina while in Ukraine researching her play Barvinok, formerly titled Blood of Our Soil. Through that work, she has developed close personal friendships with members of the veteran community, including Alina, who are in Ukraine right now fighting — in either combat, coordinating efforts, or gathering and delivering supplies.

Lianna herself is the grandchild of Ukrainian immigrants who lived with the trauma they experienced from WWII for the rest of their lives, thus can relate to suffering by this century’s victims of Russian brutality.

“The trauma that will exist for generations in Ukraine as a result of this war is unfathomable. This play explores the impacts of PTSD and will provide audiences with a deeper understanding of the long-lasting impacts of this incurable illness that will inevitably have an unimaginable impact on our society,” she says.

Following the May 27 presentation and meet and greet was held which included addresses by MPs Heather McPherson, Blake Desjarlais and Ukraine’s consul to Edmonton Oleksandr Danyleiko, all of who praised the production for its relevance to today’s war in Ukraine.

Alina closed its Edmonton run on June 5, but Makuch plans to take the play to other places, but does not have a set plan at this point. Check this newspaper for information once other venues have been arranged.