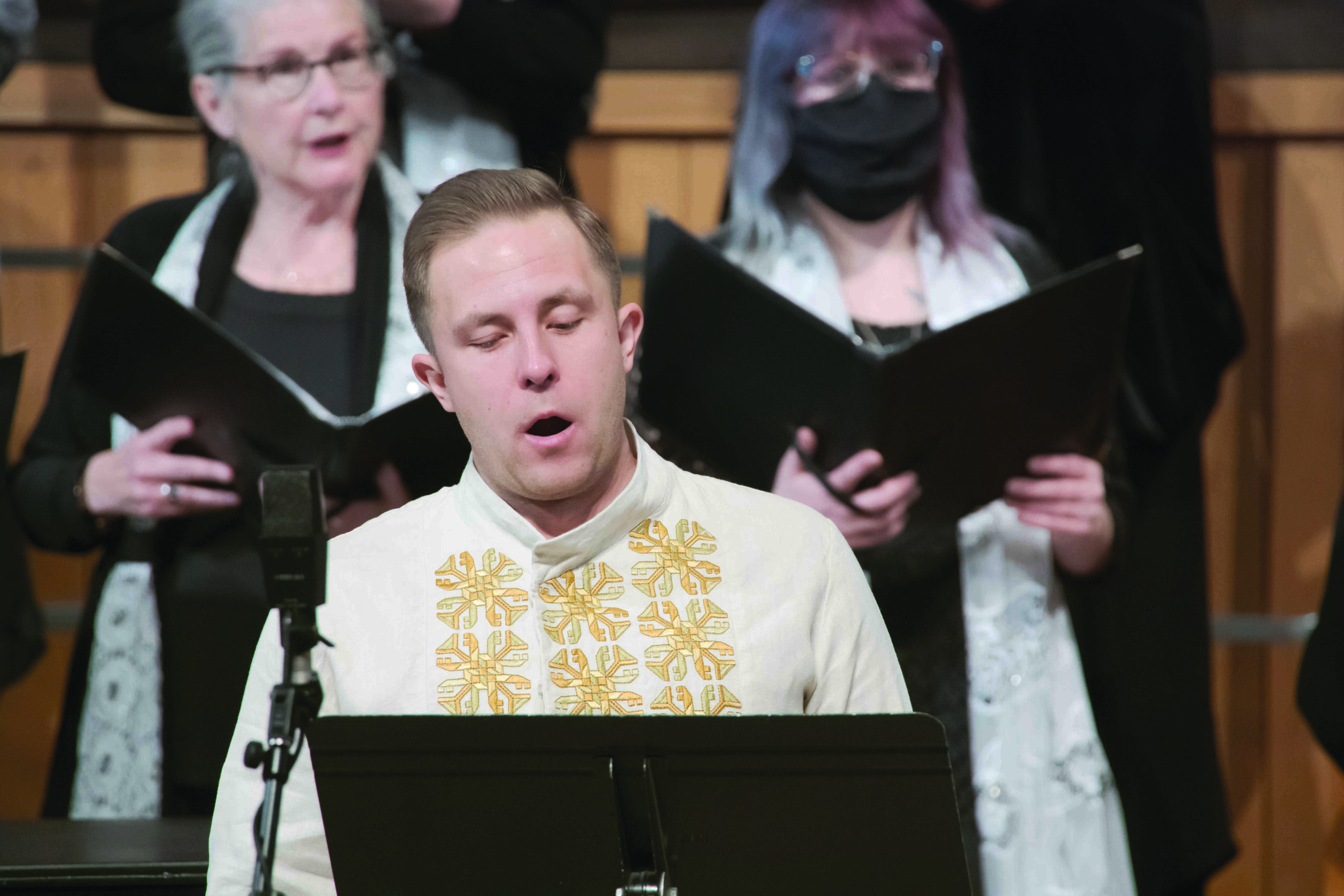 Thanks to Covid, it took Edmonton’s Kappella Kyrie Slavic Chamber Choir over two years to get their concert, “Seen the True Light” off the ground.

But the wait was worth it.

The awe-inspiring November 26 performance at the West End Christian Reformed Church was greeted with a standing ovation and the choir, conducted by Dr. Melanie Turgeon, responded with an encore featuring one of the pieces “Praise the Lord from the Heavens” by Kurt Sanders, they will be performing at their next concert, “Praise the Lord: An Evening of Psalm Texts” in May.

The choral music on the program is centred on the theme of light. The phrase “seen the true light” is from the Divine Liturgy of St. John Chrysostom. Immediately after the faithful receive the Holy Eucharist they proclaim, “We have seen the true light. We have received the heavenly Spirit. We have found the true faith.”

The program opened with a setting of this text by Ukrainian Canadian composer Roman Hurko and continued with the “Libera me” movement from Gabriel Faure’s Requiem, which describes the wrath of the final judgement, implores God to have mercy on those who have fallen asleep and prays for perpetual light to shine upon them.

This was followed by English composer Samuel Wesley’s “Thou Wilt Keep Him in Perfect Peace”, which was sung at the Service of Thanksgiving for the late Queen Elizabeth II that occurred on September 12 in Edinburgh, as the Queen’s coffin was solemnly carried into St. Gile’s Cathedral. The opening choral set ended with Ukrainian Baroque composer Artem Vedel’s, Нині отпущаєш (Lord, Now Lettest Thou), done in concerto style, where a group of soloists alternate with the full choir.

Special guest performer was Lviv Baritone Yurii Hryhorash. He joined the choir in performing as a soloist for “Libera me” and “Thou Wilt Keep Him in Perfect Peace” then launched into a solo program joined by Leanne Regehr on piano. They performed three diverse opera arias; “Largo al factotum” from the Barber of Seville, “Or dove fuggo mai?” from Bellini’s I Puritani, and finally “Ostap’s Lament” over the body of his dead brother from Mykola Lysenko’s Taras Bulba. In addition to these arias, they shared four Ukrainian art songs. Hryhorash closed the first half with renditions of two of the top hits of his favorite singer, Frank Sinatra – “Strangers in the Night” and “My Way”.

Hryhorash just missed the current war in Ukraine due to a flight cancellation. He was on his way out of L’viv for a five-month stint performing on a cruise ship, but instead of going directly to Miami on a later flight, he was immediately redirected to Poland. Less than an hour later the border was closed, and all Ukrainian men from 18 to 60 were required to stay within the borders.

The second half of the evening opened with three movements from Handel’s Messiah. Followed by an angelic arrangement of the Ukrainian carol, “Спи, Ісусе, спи (Sleep, Jesus, Sleep) featuring soloist Namisha Greening.in the first half of the program. The penultimate song on the program was John Tavener’s setting of the famous Christmas text “God Is With Us.” Tavener is an English composer, who converted to Orthodoxy while in his 30s, and this influenced his music. “God Is With Us” features various compositional techniques akin to Orthodox music, such as chant-like melodies, thick homophony, and alternation between soloist and choir.

The scheduled program closed with Dolly Parton’s “Light of a Clear Blue Morning”, a revelation of clarity and a promise of a brighter tomorrow. About the song, Dolly said, “It was my song of deliverance. It was my song of freedom, and I knew that God was in it.”