July at the University of Toronto’s Sheptytsky Institute: busier than ever 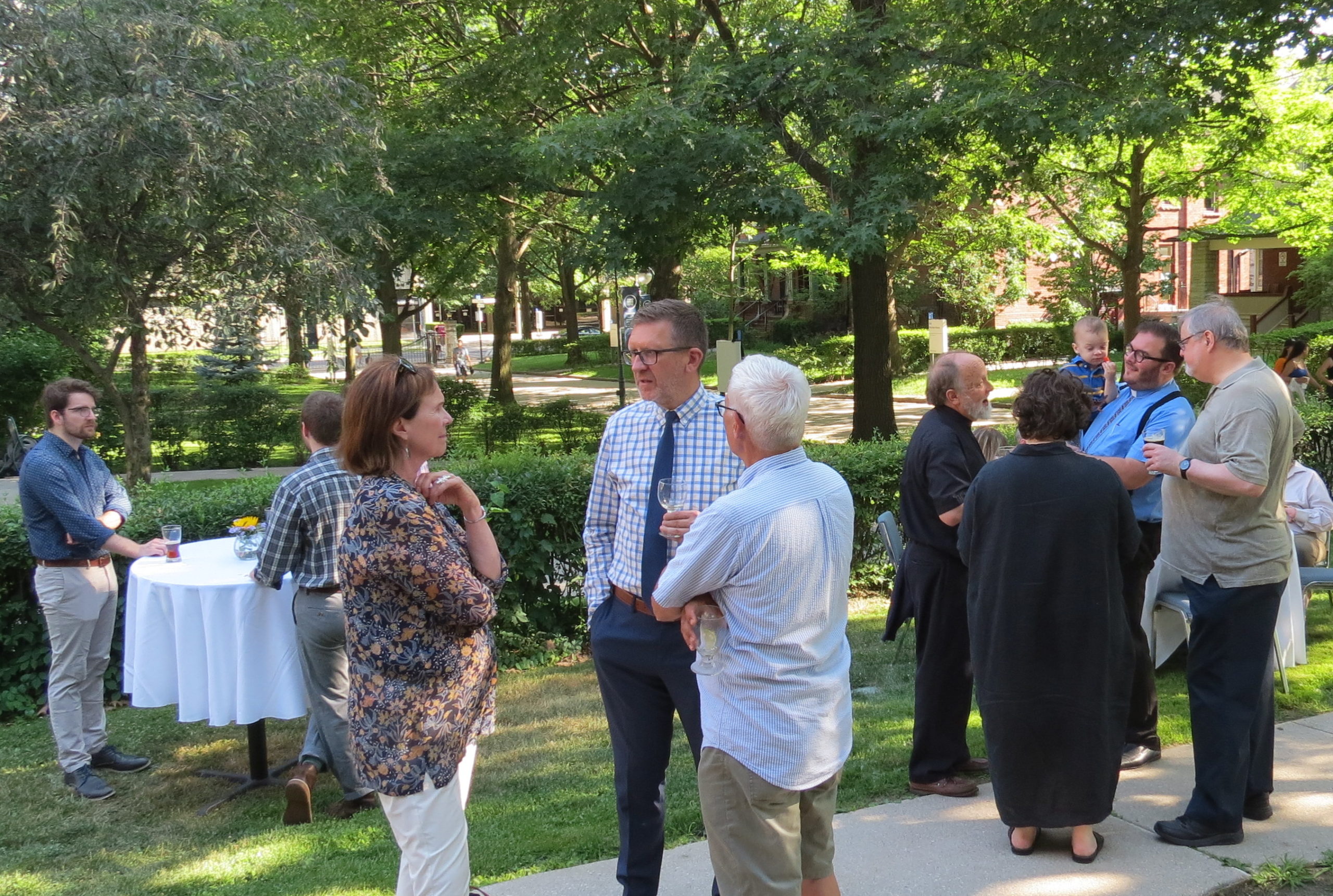 After a hiatus of more than two years, in-person programming at the Sheptytsky Institute of Eastern Christian Studies at St. Michael’s College in Toronto roared back in July. “We are so happy that COVID seems to be behind us,” said Fr. Alexander Laschuk, Executive Director of the Institute. “Bringing people together from around the world is what our Institute is all about.”

Three events did just that over a three-week period. July 10 saw the beginning of an immensely successful weeklong seminar devoted to the thought of Christianity’s “first systematic theologian,” Origen of Alexandria (c.253). Two world-renowned patristic scholars, Louis Ayres of Durham University and Fr. John Behr of Aberdeen University, led 14 doctoral students in a close reading of Origen’s masterpiece Peri archon. Funding provided by the Sheptytsky Institute Foundation enabled the Institute to accommodate the graduate students who hailed from schools as distant as Boston College, Duke, St. Louis University and Hebrew University of Jerusalem.

Sunday evening, July 10, Dr. Jaroslav Skira welcomed the international group during an opening reception. Skira is the newly appointed Dean of the Regis-St. Michael’s College Faculty of Theology of which the Sheptytsky Institute is part. “This seminar at Sheptytsky is the first in-person post-COVID event taking place in our Faculty under my deanship,” said Dr. Jaroslav Skira. “As an Eastern Catholic myself, I am very proud to see this happening.” 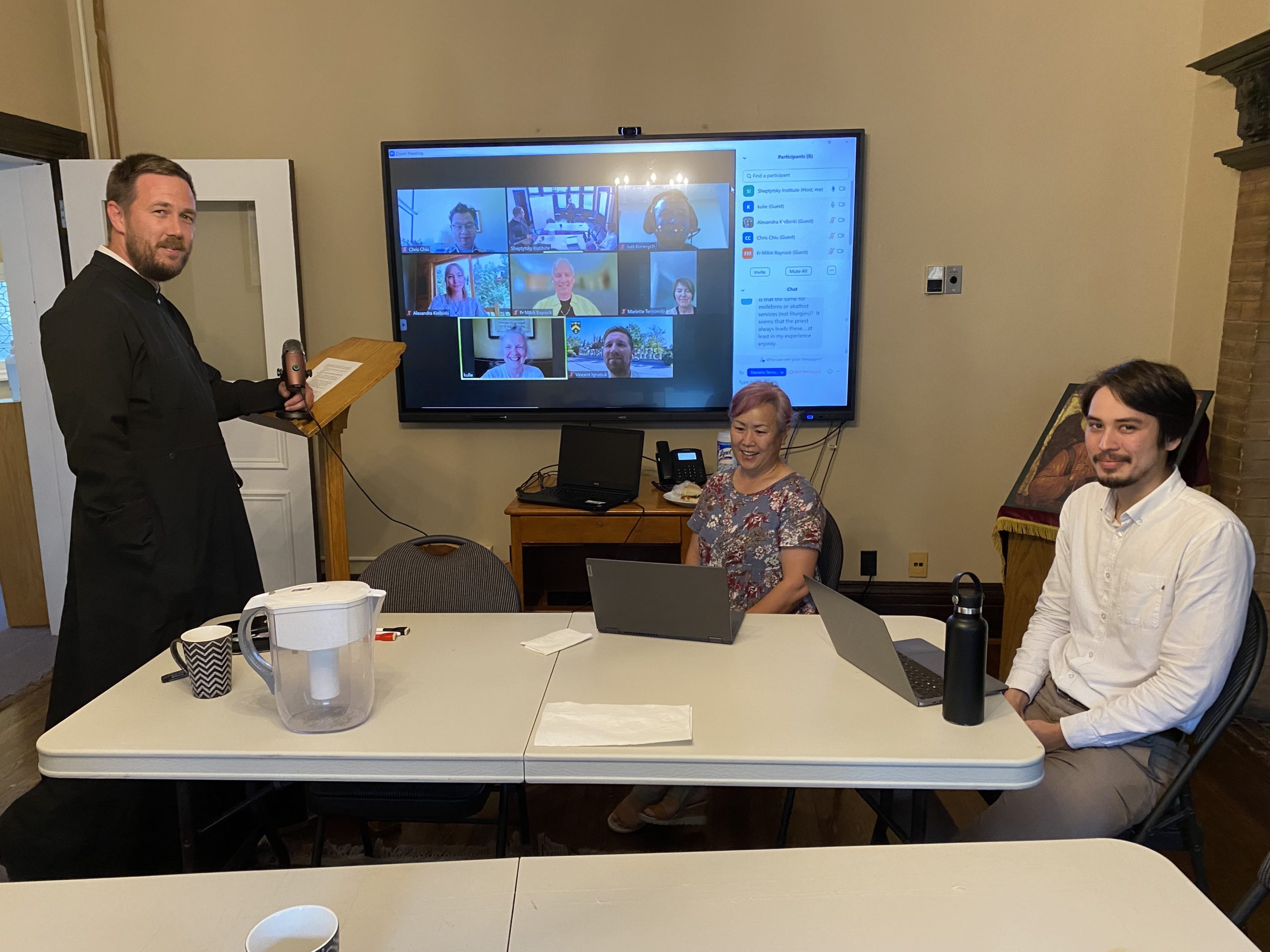 The second of the three July events started the following Friday, July 15. The ninth Sheptytsky Institute Study Days, titled “Drinking from the Hidden Fountain: Thinking and Living with the Patristic Heritage,” began with a vespers service in the Institute’s Saint Sophia Chapel. The beautiful singing was led by Jasmine Butcher and her father, Dr. Brian Butcher, long-time instructor at the Institute. Dr. Butcher, who continues as conductor of the Sheptytsky Choir, currently works at the Canadian Conference of Catholic Bishops as official theological adviser for Ecumenical and Interfaith Relations. He is also adjunct professor at McGill University in Montreal. Throughout the weekend, prayers were offered for the people of Ukraine suffering from the Russian invasion.

The Sheptytsky Institute Study Days were conceived in 2008 as a way of bringing theology to a broader public. Every Study Days has had a different theme. Regarding this year’s topic, Fr. Summerson noted: “We need to understand these first theologians to understand ourselves. Evangelization requires loving one’s own tradition.”

The plenary presentations were among the high points of Study Days. Professors Ayres and Behr masterfully brought to life the Church’s timeless wisdom regarding the human person and Christ. “The lectures were awesome,” commented Catherine Pawluch, a Toronto attorney and Chair of the Sheptytsky Institute Foundation’s Development Committee. “This was my first Study Days experience. The depth of thought and spirituality in the talks, the engagement with like-minded people of faith, the very moving Divine Liturgies and prayer together – the experience surpassed the ordinary, transcending our everyday circumstances.” 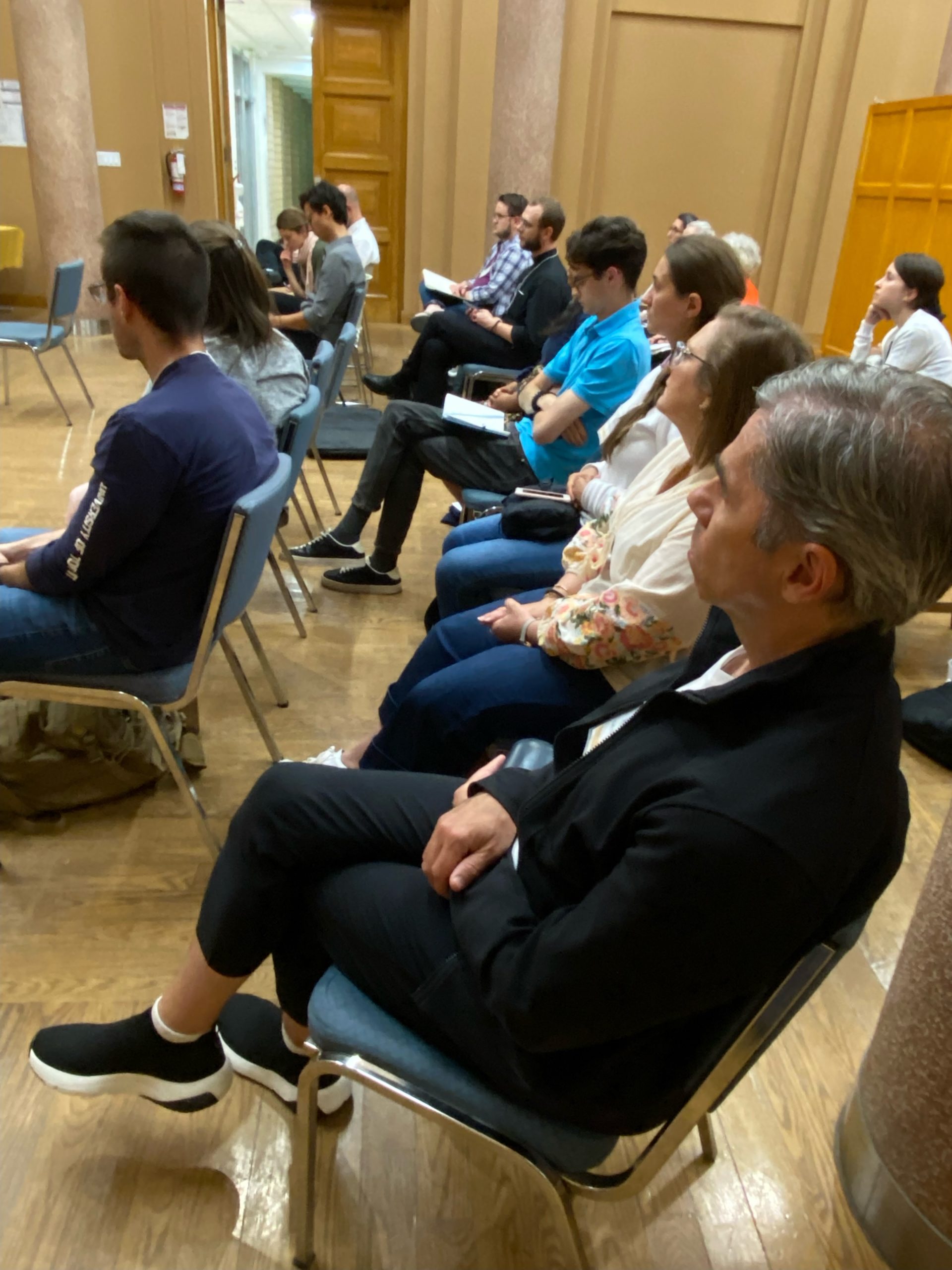 Larissa Samborsky and other participants listen to a presentation by Dr. Brian Butcher.

Throughout Saturday, break-out sessions featured presentations by other scholars. Emily Barnum, a PhD student at the University of Chicago spoke on the topic “‘In Christ’: Learning How to Read Scripture with Ancient Christian Exegetes.” Larissa Samborsky, a leader in Ukrainian Catholic youth work commented on the timeliness of the talk. “The bible today can sometimes be read in academic circles in somewhat sterile fashion. Emily’s approach was very inspiring.”

Fr. Robert Dodaro, former President of Rome’s Augustinianum, or Pontifical Patristic Institute, presented “The Fathers on Capital Punishment.” All of the other eight break-out sessions shared a similar relevance. Dodaro now resides in Toronto, and two years ago became a Fellow of the Sheptytsky Institute.

Part of the Study Days’ goal has always been to provide a full exposure to the liturgical riches of the Ukrainian Greco-Catholic Church. Thus, Matins, a Vigil service as well as the Lesser Hours were served, not to mention Divine Liturgies. Fr. Summerson’s concluding homily at the final Divine Liturgy was an inspirational high point, encouraging those present to “use theology to train their eyes toward seeing the mystery of Christ made manifest both in the liturgy and in their everyday lives.” 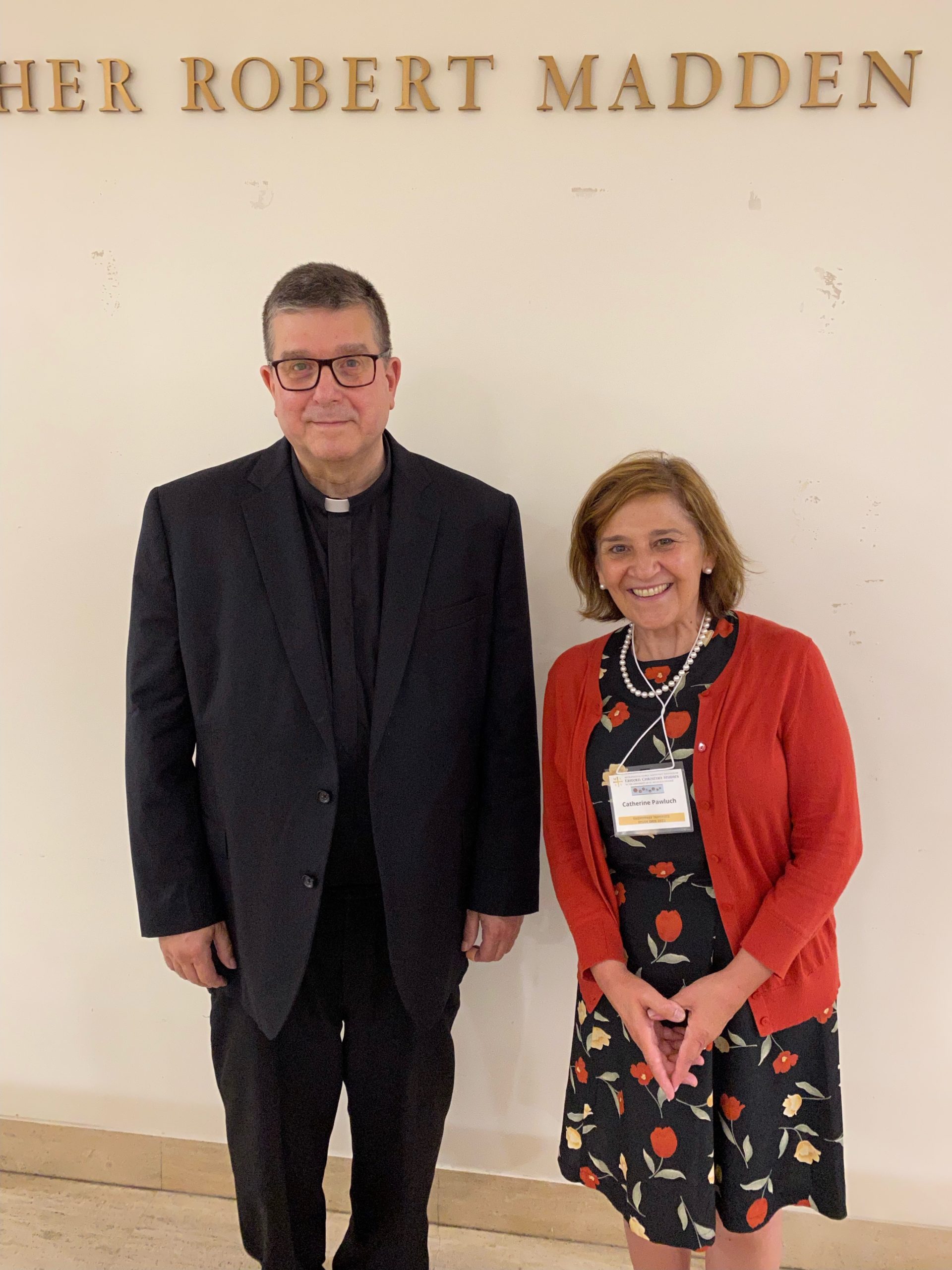 Dr. Pascal Bastien, president of the Sheptytsky Institute Foundation, has participated in several Study Days in the past, and was particularly happy that this year’s July events involved so many partnerships. “Having the Trinity College Orthodox Studies Program, Saint Augustine Seminary, the Pontifical Institute of Mediaeval Studies and the University of Toronto’s Centre for Mediaeval Studies as partners indicates the broad interest in what MASI is doing. And the Lumen Christi Institute’s backing is particularly significant.” Bastien continued: “Moreover the logistical work of the Sheptytsky Institute executive assistant, Tamara Wajda, was second to none.”

As in the past, Study Days was followed by two weeks of accredited classes. Nine students registered for the intensive course, “Byzantine Eucharistic Liturgies,” which ran until July 29. A Sheptytsky Institute alumnus, Deacon Cyril Kennedy, taught the Master’s-level class. Last April, Kennedy defended his PhD in liturgical studies at Catholic University of America. “It’s so gratifying to see our alumni going on for further studies and coming back as instructors,” said Fr. Peter Galadza, professor emeritus of St. Michael’s College and recently retired director of the Institute. “The Sheptytsky legacy lives! The vision of Fr. Andriy Chirovsky for authentic theological education continues to grow.”