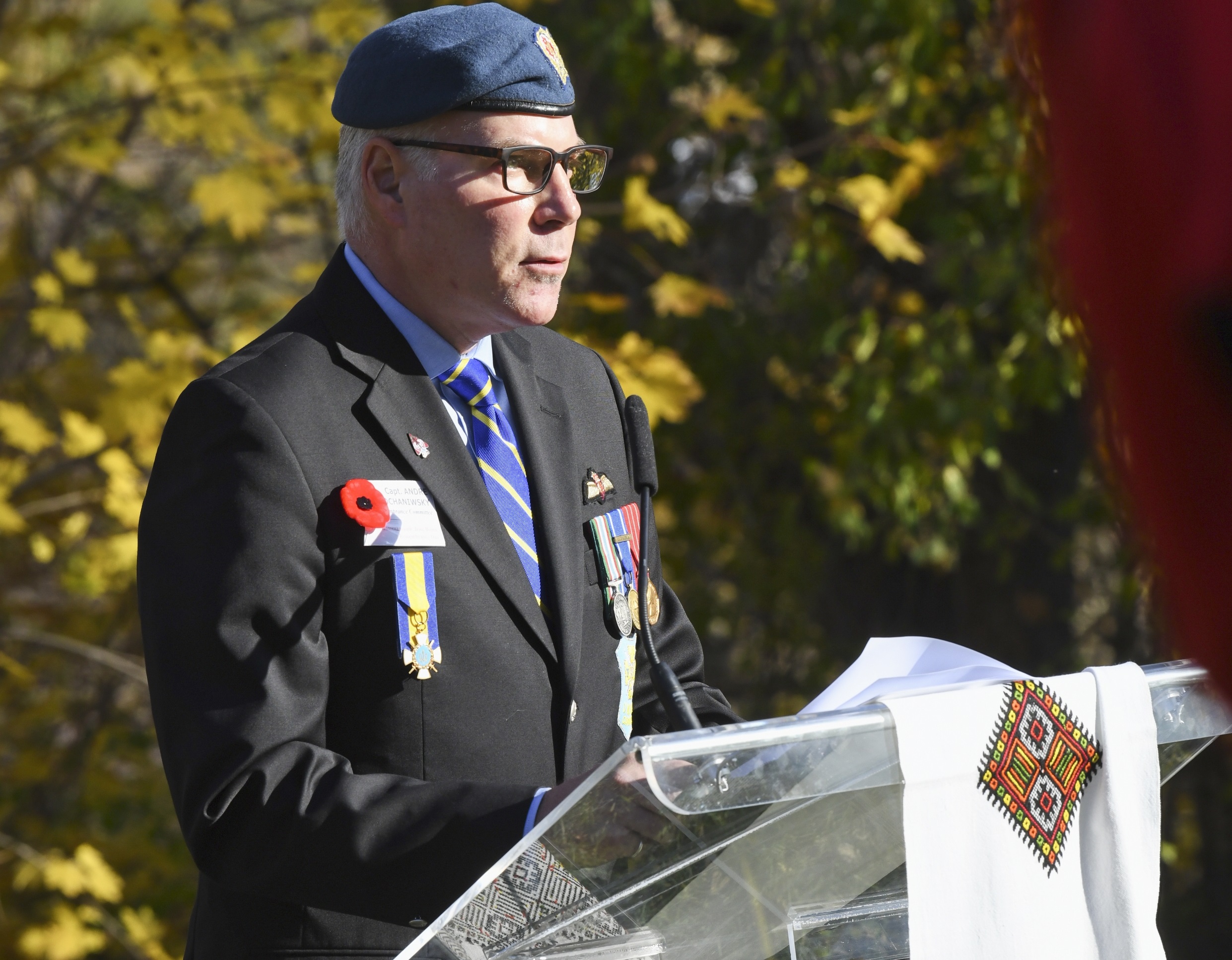 My name is Andre Sochaniwsky, and I am a member of the Ukrainian Canadian Congress Remembrance Committee, President of the Ukrainian War Veterans Association of Canada and a former officer in the Royal Canadian Air Force.

Welcome to our 2022 Remembrance Ceremony.

Nine months ago, on Thursday Feb 24, the Russian Federation launched a renewed and horrifically violent invasion of the peaceful and independent country of Ukraine.

After months of staging equipment, supplies and soldiers close to the border of Ukraine, Russia commenced its second military attempt to dominate Ukraine in the 21st century.

The date of Feb 24, like other significant military dates such as the start of WWII or the launch of Operation Barbarossa, will long remain etched in our collective minds, as a date that signalled the start of yet another genocidal war in Europe.

Not a day or week goes by when a mass grave is uncovered or a forced deportation of Ukrainian residents, including children is reported or an indiscriminate Russian drone attack is perpetrated against civilian targets.

These are scenes reminiscent of Europe in WWII.

A war that led to the adoption of the Universal Declaration of Human Rights as “the international community vowed never again to allow” the atrocities of World War II to re-occur.

And the creation of institutions and agreements to protect national borders and sovereignty.

I often ask myself, has the world forgotten its history over the last 80 years? What if the world and our international institutions had stood up to Putin sooner, more firmly and resolutely in 2014 or perhaps even 2008, when Russia attacked and subsequently occupied parts of Georgia?

Though, there are many perspectives on these questions, one thing is abundantly clear, this year’s Remembrance Day has taken on a new real and close-to-home meaning, in addition to the remembrance of world wars and recent conflicts. Your presence here today, particularly that of our youth, will help ensure that history, both distant and evolving is never forgotten.

Remembrance Day was first observed in 1919 to commemorate the armistice agreement that ended the First World War. Canada, with its small population at the time, had 620K Canadians enlist with the Canadian Expeditionary Force, with 60,000 being killed.

Twenty years later, in World War II, 1.1 million Canadian soldiers served and 42,000 were killed. There were 35,000 Ukrainian Canadians that served in the Canadian military in WWII.

Today, almost 80 years later, we are seeing with our very own eyes and in real-time the war in Ukraine and its toll on a great European nation and those who have come to aid it. According to figures from the Govt of Ukraine, since Feb 24th, approximately 10,000 Ukrainian soldiers have been killed and 30,000 wounded, and thousands of civilians have been senselessly killed.

We also now have the first casualties of foreign volunteers who have joined Ukraine’s armed forces to help defend its people and re-take its territory. Canadian Emile-Antoine Roy-Sirois was killed while fighting with a unit of the Territorial Defense of the Armed Forces of Ukraine. He volunteered to fight as he could not stand the sight of innocent people being targeted and killed.

As the war prolongs and economies begin to suffer, the world’s will and resolve to continue to help Ukraine may be tested. I hope that the lessons from World War II are heeded and that the principles, institutions and laws that were put in place after WWII to bring peace and security are upheld.

The armed forces of Ukraine will continue to defend Ukraine and take back Ukrainian territory. They have made enormous gains in the past few months. They are also on the front lines of defending the free world from the erosion of the international order. Their resolve, courage and combat excellence are an example to the world.

I recall watching an interview with a young boy playing in a park in Kyiv after the recent wave of missiles and drones attacked the city. Perhaps you have seen the interview. He was asked if he was still afraid after the attacks.

We and all citizens of the free world will have to ask ourselves the very same question. Are we afraid to stand-up to a leader and a country that has caused and continues to cause such harm and destruction and to perpetrate war crimes?

I know that the Canadian Armed Forces, are playing a significant role in aiding Ukraine and fortifying eastern Europe. Canadian troops have re-deployed under Operation UNIFIER to the United Kingdom to mentor and train Ukrainian forces. Canadian transport squadrons have ferried enormous amounts of military supplies and equipment destined for Ukraine. A Canadian battle group and fighter squadron are stationed in eastern Europe to deter further Russian aggression.

And Canadian citizens have volunteered to defend Ukraine as members of the armed forces of Ukraine.

I want to acknowledge BGen Tod Strickland, Commandant of the Canadian Forces College, Captain Andrew Carlson and Commander of 32 Canadian Brigade Group, Colonel John McEwen and Brigade Sergeant Major Chief Warrant Officer Frank Atyeo for attending this ceremony with us today. We are very grateful for your service and contributions of the Canadian Armed Forces.

The war in Ukraine rages on. Winter is coming. There will be more casualties. We and the world must never forget what Ukrainian soldiers are fighting for. We must also never forget the ultimate sacrifices that have been made by all soldiers fighting for democracy and security in the world.

Let our presence here today and every year be our eternal commitment to our fallen.

We will remember them.

Capt (Retd) Andre Sochaniwsky CD is the President of the Ukrainian War Veterans Association of Canada ((Українська Стрілецька Громада Канади), Canada’s oldest Ukrainian Canadian veterans’ organization. He proudly served in the Royal Canadian Air Force from 1984-1997. He has been involved with numerous projects that support veterans’ programs and honour military heritage. Recently, the UWVA, with financial support from the Ukrainian Credit Union Limited, created the Pro Patria Ukraine Fund to aid in the defence of Ukraine. For more information, contact [email protected]