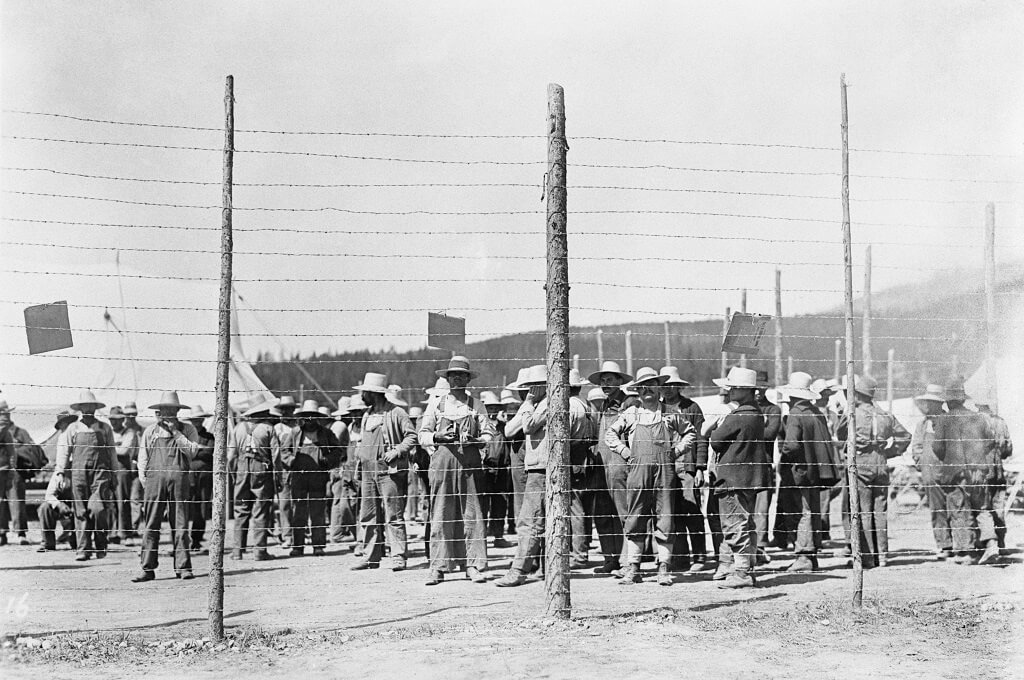 “During the First World War, thousands of Ukrainians and other Europeans found themselves targeted for internment and other repressive measures not because of any wrong they had done but only because of where they had come from, who they were,” said the Chair of the Ukrainian Canadian Congress National Internment Centenary Committee in opening “Twenty Days of Remembrance”, June 1.

“The crippling legacy of what happened to them would endure and would be detected decades later by an RCMP informant who, in August 1941, told his superiors how some Ukrainian Canadians were still ‘in fear of the barbed wire fence’,” added Borys Sydoruk, who also serves as Chair of the Ukrainian Canadian Civil Liberties Foundation.

Sydoruk made a video recording of his remarks in front the Castle Mountain Internment Camp statue and plaque in Banff National Park. The recording has been posted on the website of the Ukrainian Canadian Congress – Alberta Provincial Council.

Throughout this month and ending on June 20, Canadians are marking the 100th anniversary of the official end of Canada’s First Internment Operations, which occurred in 1914–1920. Over 8,000 Canadians of Ukrainian, German, Austrian, and other Eastern European descent were imprisoned in 24 internment and forced labour camps across Canada.

The UCC-APC is honouring this centenary anniversary by presenting informational written, visual and video posts that tell the story of the many victims and their descendants, as well as of the artists, authors, and researchers who brought this tragic event in Canadian history into the open after it was unacknowledged for over 50 years, says Taras Podilsky, Chairperson of the Internment 100 Committee UCC-APC.

In his address, Sydoruk said Canada’s first national internment operations “were shaped by pre-war prejudices that were exacerbated by wartime xenophobia”.

“Between 1891 and the outbreak of the First World War, some 170,000 Ukrainian immigrants arrived in Canada, lured to the Dominion with promises of freedom and free land

“Only a few years after these pioneer settlers arrived in the North-West Territories, a clergyman, Father Moris, expressed his loathing for them in Calgary’s Daily Herald (January 27, 1899): ‘As for the Galicians I have not met a single person in the whole of the North West who is sympathetic to them. They are, from the point of view of civilization, 10 times lower than the Indians. They have not the least idea of sanitation. In their personal habits and acts [they] resemble animals, and even in the streets of Edmonton, when they come to market, men, women, and children, would, if unchecked, turn the place into a common sewer.’

“Such bigotry persisted in the immediate post-war period. An inflammatory editorial in the February 10, 1919 Winnipeg Telegram demanding ‘Enemy Aliens Must Go’ questioned whether it was necessary to ‘import a race of inferior beings to do our work, or right for returning soldiers to compete with the bohunks of Central Europe, who have been accustomed in their own country to submit to being driven like cattle, who are ignorant of every principle of sanitation, and lost to all sense of decency in living conditions.” The writer insisted that returned soldiers or any other ‘white man’ must be given decent working conditions and ‘if those conditions in any occupation at present are unfitted for a white man then they must be made fit. It will then be unnecessary to depend upon enemy aliens for labor to develop the resources of Canada.’ Evidently, the Ukrainians, Croatians, Serbs, Hungarians and other Eastern Europeans herded into Canadian concentration camp” were not as White as some label them today — instead being racialized ‘others’.

“Internees were exploited for their labour in the national parks of Western Canada, building roads, clearing bush, cutting trails and even building a portion of the golf course in Banff. Others helped carve experimental farms out of the boreal wilderness at Kapuskasing, Ontario, and Spirit Lake, Quebec. Conditions were trying, the guards were sometimes brutal, and so resentment at what many regarded as their unjust confinement was widespread, provoking resistance, some passive such as work slowdowns. Other efforts were more determined, including escape attempts and even a massive riot involving some 1,200 internees at Kapuskasing in May 1916 that required the intervention of 300 armed soldiers before it was put down,” he continued.

“In total, 107 internees died in captivity, six shot dead while attempting to escape, others succumbing to infectious diseases, work-related injuries and suicide. In many cases, they were buried in unmarked graves or cemeteries far from their communities and loved ones, their final resting places all but forgotten,” Sydoruk continued.

“Despite the end of fighting on the Western Front following the signing of an armistice on November 11, 1918, the Internment Operations Branch, commanded by Sir William Dillon Otter, remained active until June 20, 1920,” added Sydoruk.

Efforts to secure acknowledgement and redress for Canada’s first national internment operations began in 1978, yet almost a decade would pass before a concerted campaign to right this historic injustice began, spearheaded by the Ukrainian Canadian Civil Liberties Association (UCCLA) under the chairmanship of John B. Gregorovich.

Sydoruk closed by quoting a child survivor of the Spirit Lake internment camp in northern Quebec, Mary Manko Haskett, who reflected on how the civil liberties of so many Canadians were revoked on two subsequent occasions — during the Second World War and the 1970 October Crisis: “What was done to us was wrong. Because no one bothered to remember or learn about the wrong that was done to us it was done to others again, and yet again. Maybe there’s an even greater wrong in that,” he quoted her as saying.