“I Lived There, Hungered, but Survived” 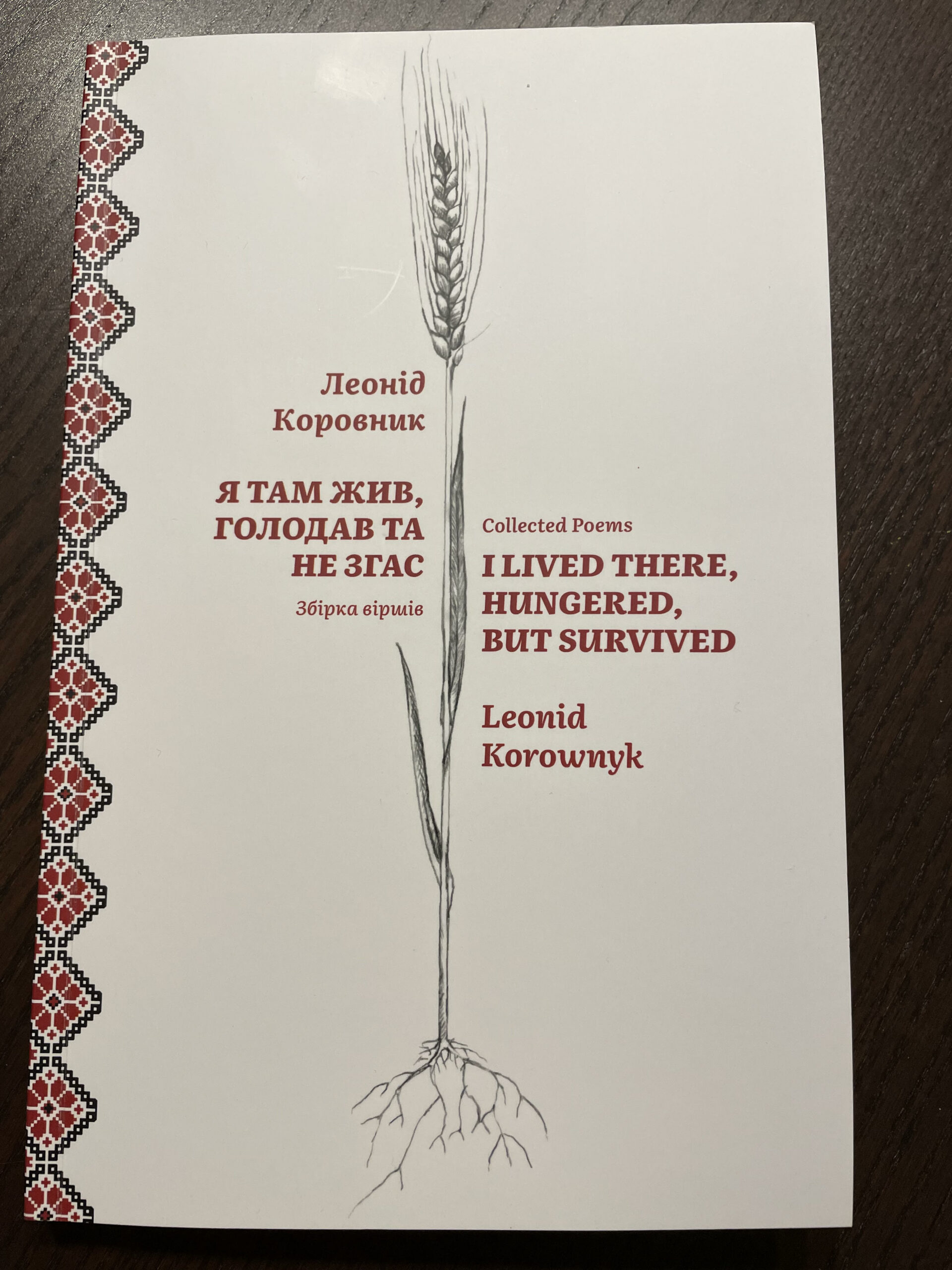 The Edmonton Branch of the League of Ukrainian Canadians hosted the launch of Leonid Korownyk’s book of collected poetry “I Lived there, hungered, but Survived” on November 20, 2022, at the Ukrainian Youth Unity Complex. The well attended event was an opportunity to hear directly from the author along with presentations concerning the numerous steps along the road to publication. 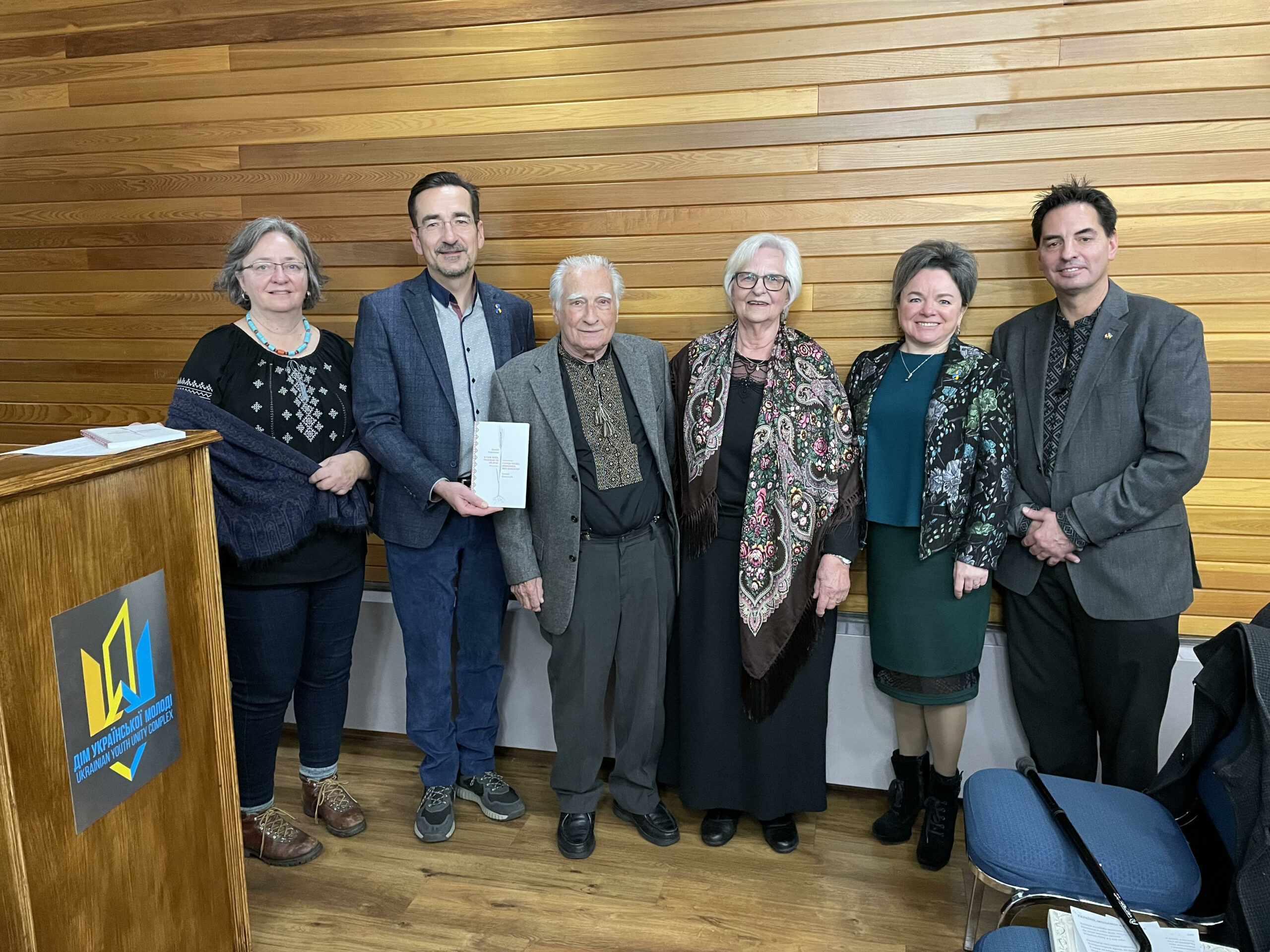 Life-long community activist and school principal Taras Podilsky opened the afternoon event by sharing how this collection of poetry came to life. While Principal at St. Martin Catholic Elementary School in Edmonton, one of a several schools that offer the English-Ukrainian bilingual program, Podilsky sought out a Holodomor survivor who would speak to elementary school aged children about his experiences during the Holodomor. Korownyk was willing and able to meet with students to share his story. The meetings went extremely well and Korownyk was invited to return yearly to various schools with the bilingual program.

Podilsky recognized that Holodomor survivors were getting older and there is a need to pass on knowledge and understanding about the Holodomor to future generations. He reached out to Leonid Korownyk with the idea of publishing a collection of Korownyk’s poetry. For many years now, Korownyk has been a favorite participant in Edmonton’s annual Holodomor commemorations, delivering his original Holodomor poems documenting his own recollections of the genocide of the Ukrainian Nation and honouring the memories of the victims. To Podilsky’s surprise, Korownyk had already published two volumes of his writing in Ukraine. These works were primarily Christian poetry as Korownyk was a Ukrainian Baptist Minister, but his works also deal with Ukraine and its historic struggle for self-determination while others commemorate the bard of Ukraine, Taras Shevchenko. It is significant that even though many of Korownyk’s poems were written years ago, shockingly, they mirror what is happening in Ukraine in 2022.

A committee was struck and work to publish a volume of Korownyk’s poetry began in earnest. It was decided the volume must be bilingual to accommodate the widest possible readership.

Professional translator Ksenia Maryniak was engaged to provide Ukrainian to English translation. Maryniak spoke briefly about the translation process, noting her translations are not poems but are a combination of literal and metric translation. The former are words that correspond to the original words, while metric translation is poetic with the same rhythm as the original. Maryniak was moved by the poetry she worked with and expressed great admiration for the poet, the man, the author, and the Holodomor survivor. She noted that Korownyk’s work embraces a fantastic lexicon with words rarely repeated. His theme may be same, but every expression is unique and powerful. She further noted that the biographical essay at the end of the volume is more of a literal translation, so it is reflective of the author’s own, authentic voice. The translations also involved two poems originally written in English and these were translated by Kyivan Serhii Synhayivsky. Maryniak said she was privileged to have worked on this publication and was grateful for the opportunity to participate in this project.

An aspiring actor and newcomer from Ternopil to Edmonton, 18-year-old Valentyn Shabanov recited two of Korownyk’s poems. His beautiful delivery of the poems on difficult subjects was artistic and sensitive, conveying the pain suffered by the Ukrainian Nation.

The importance of publishing a book like this was echoed by the Consul General of Ukraine in Edmonton, Alexander Danyleiko. He was honoured to have been invited to write the Preface to the new volume because the poetry is as important today as when it was written years ago. The genocide of the Ukrainian Nation that was started 90 years ago, repeats, and continues in 2022. Mr. Danyleiko said “The enemy wants to subjugate the Ukrainian Nation, to destroy it, to make the Ukrainian people into mute, submissive slaves. After the Holodomor, the kremlin wanted to create a “soviet man” but did not succeed. Now the same enemy started a genocidal war to eliminate Ukrainians as a nation. Ukrainians continue to fight russian imperialism and Leonid Korownyk is an example of our struggle.” His poetry inspires. We are a great nation; we will always be Ukrainian and we will remain Ukrainian.

Dr. Valerii Polkovsky provides an insightful Introduction to the book in which he skillfully analyzes Korownyk’s poetry. Polkovsky highlights the artistry of the author in conveying his observations of the Holodomor in concise yet highly descriptive language, where every word of every line creates indelible images for the reader. Korownyk is particularly skilled at using unique and rare words. His Ukrainian lexicon is rich and expressive. Another favorite of Korownyk’s topics is Ukraine’s immortal Bard Taras Shevchenko. The poet celebrates the genius and influence of Shevchenko on the Ukrainian identity. Without a doubt, Ukraine, its history, past, present, and future and Ukraine’s immortal heroes, like the soldiers of UPA, are momentous inspirations for Korownyk.

Leonid Korownyk’s son, Nathan shared some intimate family memories about his father. He described his dad as a family man who has always been resourceful, creative, and committed, with a great love for Ukraine, the Ukrainian language, and people. He has always been impressed with his father’s work translating theological books from English into Ukrainian because his dad is concerned with the spiritual health of the Ukrainian people. Nathan related how his father and mother provided tangible help to Ukraine by taking enormous amounts of luggage with them to Ukraine to distribute books and clothing to those in need. But what Nathan is most in awe of is how his father, as a young teen survived the grinding poverty and hunger of World War II by begging for food, as he and his family fled German and Russian tyranny in their flight to the west. Despite these unimaginable challenges, Leonid Korownyk arrived in Canada and accomplished so much by building an exemplary and successful life.

Anne Korownyk, Leonid’s wife of 65 years stated there are four important words that describe her husband. The first is faith, then and now, is a cornerstone of his life. It is beautifully expressed in his poem “Contemplation” or “Роздуми.” Second is dedication, to his family, his children, grandchildren, and great-grandchildren. Third is appreciation for his adopted country, Canada and finally, lasting respect for his country Ukraine. He thrives on its history and language and the dedication and tenacity of Ukraine’s people. Leonid has had eight theological books published and distributed in Ukraine and he is enormously proud of this.

The book design was created by Olya Zarapin, videographer who captured live interviews with Leonid Korownyk was Marko Boychuk and Publishing Coordinator was Peter Kardasz. Literary and historical consultants were Leonid and Anne Korownyk.

The event concluded with remarks by Leonid and Anne Korownyk who expressed their profound gratitude for having his book published and finally a reading of “Ukraine, We Pray For You” by the poet.