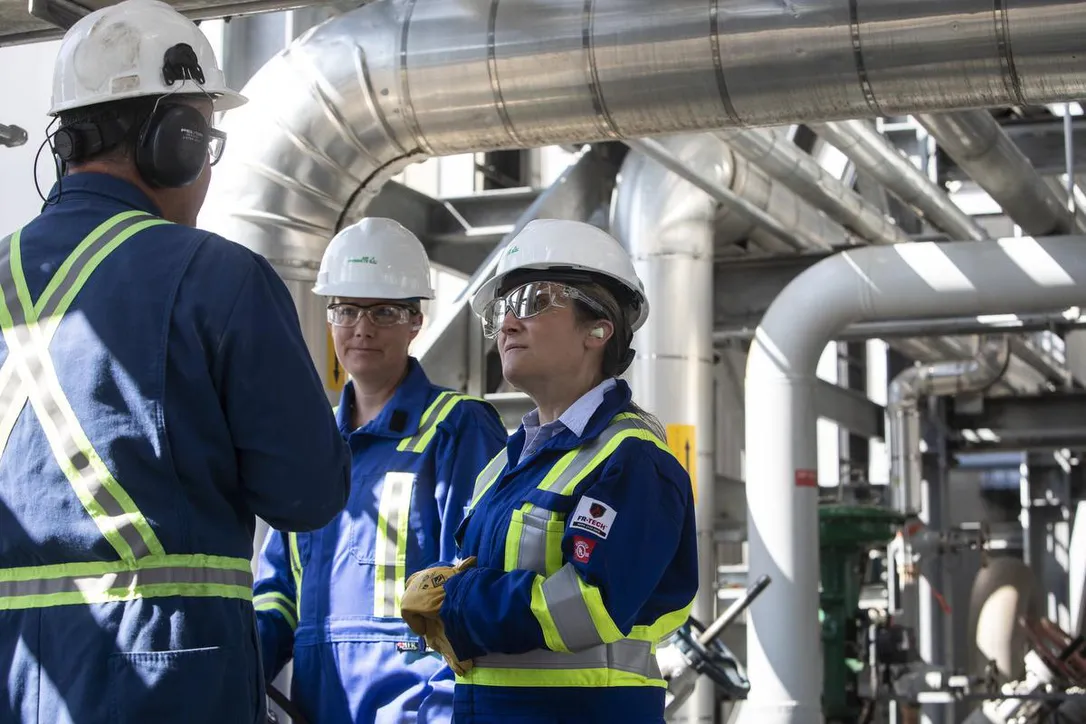 The $1.3 billion net-zero hydrogen complex in Edmonton being built by Air Products with support from the federal and provincial governments will boost Alberta’s economy as well as help wean Europe off Russian gas, says Deputy Prime Minister Chrystia Freeland.

During German Chancellor Olaf Scholz’s recent visit to Canada, he and Prime Minister Justine Trudeau signed the Canada Germany Hydrogen Alliance that will help bring clean, renewable energy to Germany as that country moves away from its dependence on Russian fossil fuels in the wake of Moscow’s barbaric invasion of Ukraine. Canada also discussed opportunities to export LNG from either the East Coast or the West Coast from Kitimat, BC.

Speaking with reporters after a tour of the Air Products facilities in Sherwood Park, Freeland said that as the global economy moves away from fossil fuels, hydrogen is used mainly in industrial processes today, but it can fuel heavy duty vehicles such as buses, trucks and trains and potentially farm machinery. It can be used in cars and homes and that work is being done now, in Edmonton. The new complex is supposed to be operational by 2024 and will help make Edmonton the centre of Western Canada’s hydrogen economy. This will bring more investment and more good paying middle class jobs to Alberta.

The Deputy Prime Minister said that Canada is a trading nation and Canada’s trading partners have decided to go green. This will be the greatest transformation of industry and the economy since the industrial revolution. She stated this is an incredible opportunity for Canada and Alberta that has the resources, the people and the expertise to be a reliable supplier of energy in a net-zero world.

Freeland underscored the fact that the government is working to ensure the energy industry in Alberta and across the country can continue to grow and continue to be a force for growth and job creation. She used the opportunity to highlight the part of the last spring budget that provides the refundable tax credits to businesses that engage in Carbon Capture, Utilization and Storage, the CCUS Tax Credit. This tax credit will be extremely important to companies like Air Products, business in the oil and gas industry and industries involved in cement and steel production.

Freeland was queried about Canada’s commitment to Ukraine given that Canada recently returned important Siemen’s turbines to Russia via Germany. These in effect facilitate the continued flow of Russian gas to Germany and western dollars that support Russia’s genocide in Ukraine.

The Deputy Prime Minister was unequivocal about the current government’s support of Ukraine. Ukrainian Independence Day was a day earlier and Canada is going to be with Ukraine as long as it takes. She noted that the Canadian government speaks to Ukrainian government leaders daily and is in close contact with them. Canada and Canadians are strong supporters of Ukraine and she further noted that Ukraine is not just fighting for its own democracy but is fighting for the world’s democracies. She explained that the Russian invasion of Ukraine on February 24, 2022 changed the world and that means that Canada needs to collaborate and find new ways to work with our allies. She was proud of the fact that Canada has actually dispersed all the promised aid to Ukraine and that money has hit Ukrainian bank accounts. She encouraged everyone to see what President Zelenskyy has been saying about Canada’s assistance.

Freeland was also asked about the visit of NATO Secretary General Jens Stoltenberg who was visiting the Canadian Arctic at the same time she was in Edmonton. She said that Canada’s Arctic security is extremely important, and Canada will increase its spending on defending the Arctic. She noted that Canada absolutely communicates with its NATO partners. As noted by Secretary General Stoltenberg, Russian is expanding its presence in the Arctic. It has opened hundreds of old former Soviet military sites and this must be of concern for Canada.

Not surprisingly, a question came up concerning the characterization of the Deputy Prime Minister by Jared Kushner, the son-in-law of former U.S. President Trump. In his new book Kushner indicates that Freedland was difficult to deal with in the 2019 NAFTA negotiations. Her response was quite succinct. The Deputy Prime Minister noted that “When you’re threatened by a bully, the answer is not to cave in. The answer is to stay united and to stay strong.” She further noted that Canada was successful in the negotiations because the entire Canadian team stayed united.