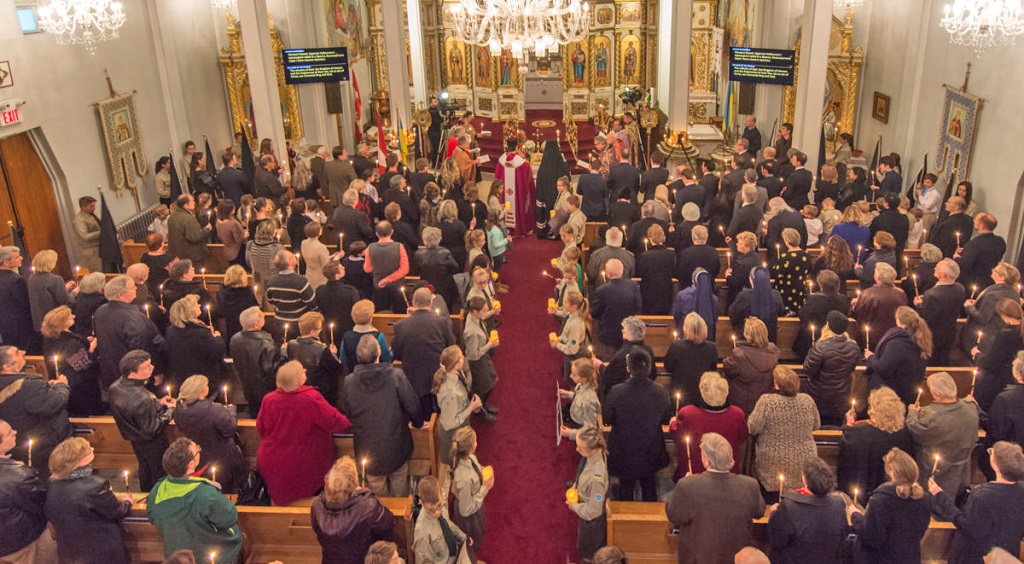 On Saturday, November 26, 2016 over 400 people attended a very moving Holodomor Commemorative Service organized by the Ukrainian Canadian Congress, Toronto Branch. The Commemorative event was held to honour and pray for the millions of lives that perished by a deliberate starvation led by the Soviet regime during 1932-1933.

On this solemn occasion, the audience remembered and prayed for the victims of the Holodomor, victims who were forced to experience the engineered attempt to wipe out an entire culture by a totalitarian regime. The effects of this upon the Ukrainian nation resonate to this day, as Ukrainians also remember to commemorate the third anniversary of the Revolution of Dignity, also referred to as “The Maidan”.

The ceremony was held at St. Demetrius Orthodox Church on Lake Shore Boulevard in Toronto. It commenced with a processional led by Dr. Pavlo and Nadia Zmiyiwsky, and their children followed by numerous youth members from the Ukrainian Youth Associations (“CYM”), CYM Mississauga and CYM Etobicoke who throughout the entire commemoration held candles and posters which they made depicting the Holodomor in addition to creating an honour guard holding 33 black flags.

Bohdana Schturyn, the main speaker and granddaughter of survivor Stefan Horlatsch, gave a very moving and poignant speech recounting the need to memorialize the genocide of the Holodomor. In her speech she recounted the personal tragedy of her grandfather and the family that she never got to know and their fate. As well, she stressed the importance for erecting and supporting a Holodomor monument in Toronto, and how the iconic statue of the “little girl” (the iconic bronze sculpture “Bitter Memories of Childhood”) is a reminder of Ukraine’s history that must not be forgotten. As well, Miss Schturyn stated that the monument is a reminder of things that we need to strive to change in our society.

Comments on this tragic period of Ukrainian history were made by the Consul General of Ukraine in Toronto, Mr. Andryi Veselovskyi along with MP Borys Wrzesnewskyj, MPP Yvan Baker (a grandson of a Holodomor survivor), and MPP Patrick Brown, Leader of the Progressive Conservative Party of Ontario. Greetings from the Premier of Ontario, Kathleen Wynne, were brought by MPP Peter Milczyn and further greetings were sent by the Leader of the Ontario NDP, MPP Andrea Horvath. Other MPs in attendance were Peter Fonseca, James Maloney, Sven Spengemann and Arif Virani as well as MPP John Yakabuski. Trustees Chris Glover and Pamela Goughes from the Toronto District School Board were also in attendance.

In her closing remarks, Oksana Rewa, Past President of the Ukrainian Canadian Congress, Toronto Branch, spoke of the fact that during the years of the Holodomor, nations were unwilling to disrupt lucrative trade agreements with the Soviet Union in order to recognize or pursue the dire matter of the famine. She also stated that Ukrainians fear that this pattern is rearing its ugly head once again and that their current fight for decency and democracy will be foiled… all the sake for someone’s economic growth.

In closing, emcees Liza Zienchuk and Taras Chved asked that all join the worldwide Ukrainian community in remembering those who perished during the Holodomor, by lighting a candle at 19:32 – a candle of Remembrance.