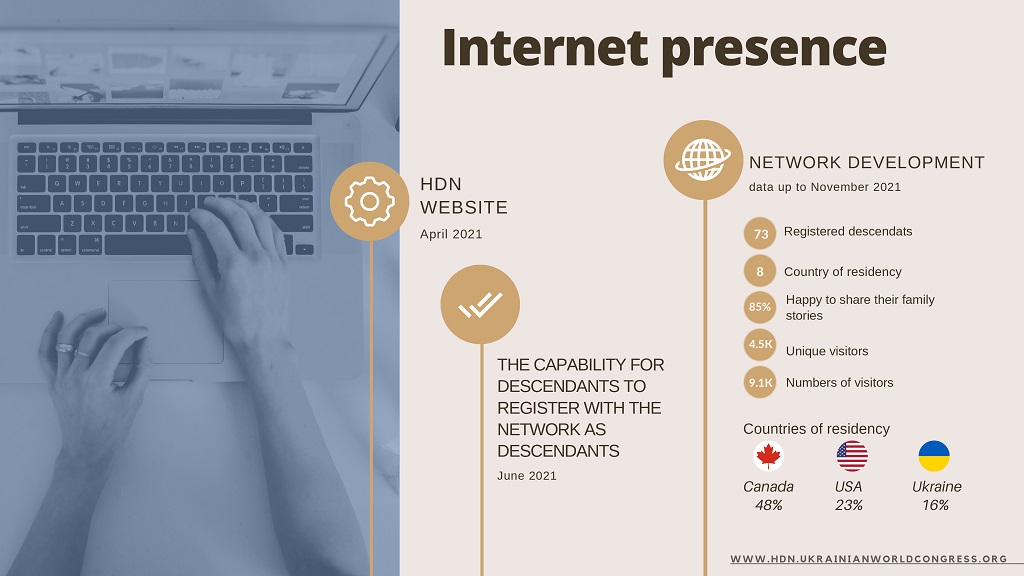 “And now, one year post launch, we look back with a sense of accomplishment for what has been achieved through the efforts of a very small dedicated work team, a growing network of descendants and supported by a global community of Ukrainians committed to ensuring that the truth about this genocide is known throughout the world,” said the report.

The Holodomor Descendants Network is the first global community organization whose goal is to unite the relatives of Holodomor survivors.

The network collects and protects the stories of families affected by the Holodomor genocide, raises awareness among the descendants of Holodomor victims about the long-term consequences of the genocide, preserves and honors the memory of innocent victims, as well as defends the true facts of the Holodomor to counter misinformation.

“Our most important work is that, which we have done with our survivors of the Holodomor, documenting the stories which they have so courageously shared with us,” said Iryna Mycak, committee chair of the UCC's Holodomor National Awareness Committee, at the Canadian launch of the Global Holodomor Descendants Network in April 2021. “They understood the need for us to hear their stories in the hope that their experiences were contribute to greater awareness, understanding and to preventing similar atrocities from happening in the future.”

There are two regional networks – Canadian and American – who work locally to build awareness and contribute to the achievement of the goals of the global network. The Canadian Holodomor Descendants' Network was launched in April 2021, and is sponsored by the National Holodomor Awareness Committee of the Canadian Ukrainian Congress.

“We have begun collecting videos from descendants relaying information about how their families were able to survive during the Holodomor and are now sharing these on our website,” the report said.

The HDN believes that this work is highly critical to preserving the national memory of the Ukrainian nation. The organization is currently in the planning phase with partners – the National Institute of Remembrance in Ukraine and the Ukrainian Research and Documentation Center – to conduct interviews with descendants using a consistent topic guide and conducted by professional interviewing staff.

“In this way, we believe that we will honor our families’ experiences and preserve their memory for future generations,” the report said.

The Network expects initial results to be available for the 89th Anniversary of the Holodomor in 2022.

The Network will also be working with Carleton University in Ottawa to identify Holodomor Descendants who grew up in the U.S., who would want to participate in ongoing research on multigenerational effects of the Holodomor.

If you are a descendant of a Holodomor survivor, you can join the Network at hdn.ukrainianworldcongress.org.