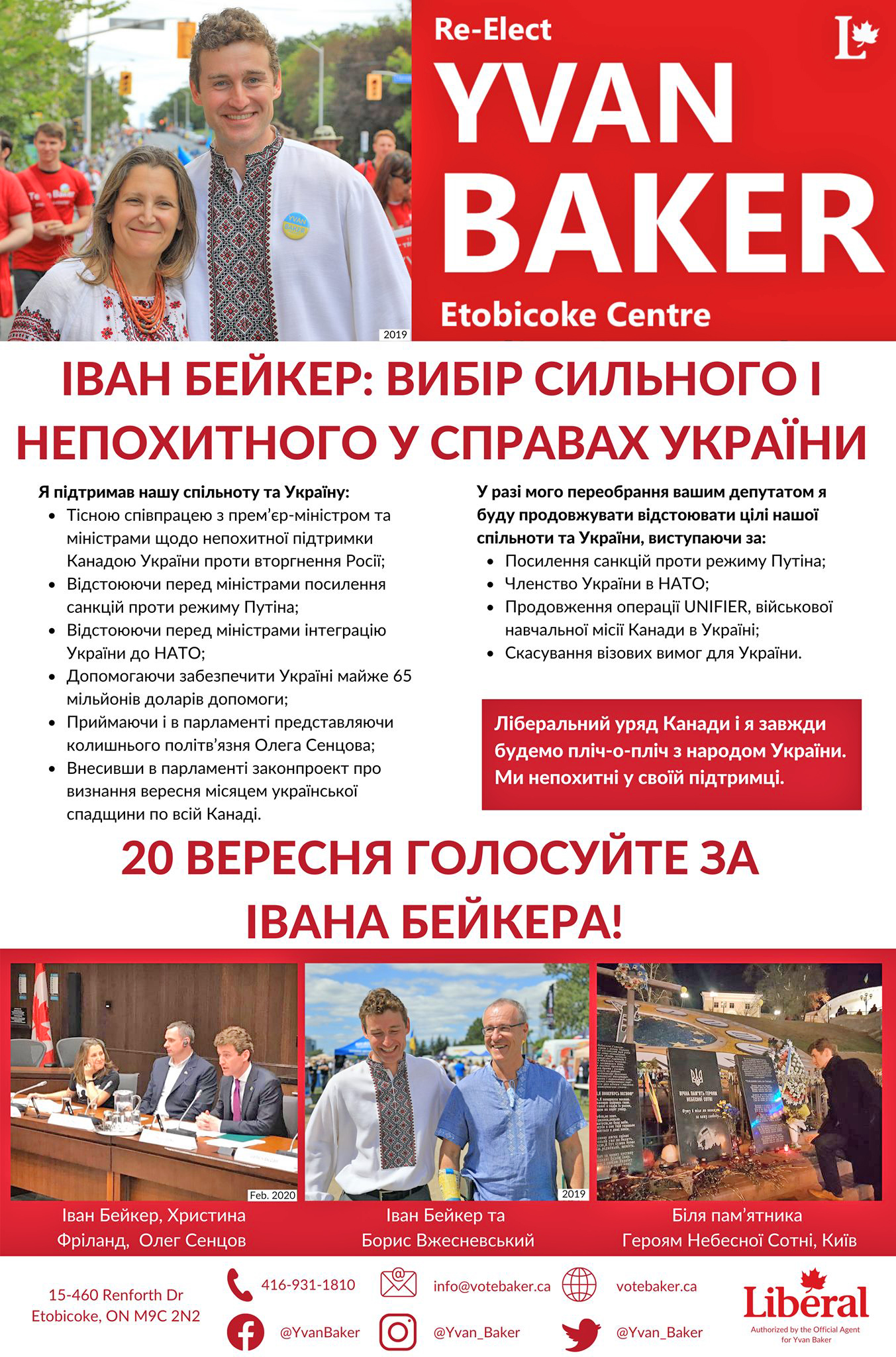 Yvan Baker served as MP from Etobicoke Centre (Ontario) since 2019. This riding is one of the top Ukrainian hotspots in Canada with Ukrainian placing second, after English, in the list of Top Ten Home Languages and with recent immigrants from Ukraine placing second after Filipinos in Top Ten Recent Immigrants by Place of Birth (2016 Census). Yvan Baker has for a long time been among leaders of the Ukrainian Canadian community. He used to be the President of Ukrainian Canadian Congress Ontario Provincial Council. In June 2021, he introduced a private member’s bill in Parliament, An act respecting Ukrainian Heritage Month. Baker is now running as a Liberal candidate for Etobicoke Centre.

NP-UN: The Liberal Party was ahead in the polls for a long time, but now it’s more or less tied with the Conservatives. What is your outlook on the state of the campaign nationally and in Etobicoke Centre?

Yvan Baker: In Etobicoke Centre, it’s a tight race, according to the polls. But the feedback from the community on the work that I’ve done in the past two years has been positive, and I am optimistic about the outcome. Now everybody needs to get out there and vote. Nationally, it’s hard to predict what the outcome will be. The options before Canadians are quite different; there is a lot at stake in this election. The Liberals are committed to rebuilding the economy, to improve health care and long-term care. We have a fiscal plan to support that. On the other side, the Conservatives are talking about private healthcare. Mr. O’Toole has clearly said he doesn’t support national standards for long-term care, and he is inclined to weaken our action on climate change.

NP-UN: What do you consider your biggest achievements and what have you not achieved during your tenure?

Yvan Baker: There’s a couple of things I want to underline. One of them locally is Eglinton Crosstown West extension (Eglinton LRT). When I was MPP, I was able to persuade the province and the city to build it underground. As MP, I fought for 1.5 years and was able to secure $2 billion in funding from the federal government for the project. Another thing is my advocacy to improve long-term care. The pandemic exposed how many seniors receive poor care. Four other MPs and I started, and others joined in advocating with the Prime Minister and the Premier of Ontario for national standards for long-term care. We convinced the Prime Minister to go ahead with that, and he’s now working with the provinces to establish national standards. The third thing locally in the riding is that I was able to secure about $7 million in funding from the federal government for 35 schools in Etobicoke Centre, which will allow them to renovate and build infrastructure to help keep kids safe during the pandemic. There’s still a lot of work to be done to realize all those things. On the Eglinton LRT, we need to make sure that it’s built as soon as possible. In terms of the national standards for long-term care, there is a lot of work to do. Many provinces have signed on to the national standards, but some provinces like Ontario, unfortunately, have not. And I’ll be doing a lot more advocacy to make sure that we develop the right standards as quickly as possible and that we bring in Ontario.

NP-UN: What are you hearing from the voters in the riding?

Yvan Baker: The issue that I hear about the most is that we need to finish the fight against COVID-19. A lot of people have lost their businesses or lost their jobs as a result of COVID-19. And we need to rebuild our economy so that people can enjoy the quality of life they deserve. I hear a lot about the need to improve our health care and long-term care. And I hear a lot about affordability, about many folks who are struggling, increasingly, to make ends meet or to buy a home, especially when they are starting. And, of course, I hear from folks that they want to make sure that the government has a sound financial plan to support all of the initiatives that they’re promised. And I’m hearing that what the Liberal Party is proposing is resonating with people at the doors.

NP-UN: As the Chair of Canada-Ukraine Parliamentary Friendship Group, what do you think should be the immediate and strategic things Canada should be doing regarding Ukraine?

Yvan Baker: As the head of the group, I spend a lot of time working to ensure Canada does everything Canada can do for Ukraine. We have to continue strengthening sanctions against the Putin regime, do everything we can to support Ukraine’s integration into NATO and continue Operation UNIFIER, which is the Canadian mission where Canadian soldiers are training Ukrainian soldiers. We need to expand it, not just the amount of training but also the locations of training. And lastly, I believe that we need to eliminate the visa regime for Ukrainians who want to come to Canada.

NP-UN: It is known that some NATO members including Germany and France are opposed to Ukraine’s getting Membership Action Plan (MAP) to join NATO at the moment. What can Canada do in this situation to help Ukraine’s aspirations to get MAP?

Yvan Baker: I think Canada has been doing a lot of work on a couple of fronts. One is to help Ukraine meet the requirements that are needed to become a NATO member. Our military is not just training the frontline soldiers within Operation UNIFIER, they’re also working with senior members of the Ukrainian armed forces to make sure they have the leadership skills and technology, the interoperability with NATO. On the question about Germany and France, Canada has been and will continue to advocate with our NATO allies, to urge them to support Ukraine’s membership in NATO. Not just because it’s good for Ukraine, but because it’s good for Canada and other countries. Russia poses a security threat to Ukraine and our allies in Europe, including Germany and France. If Ukraine becomes part of NATO, we will have another strong member committed to the alliance and protecting European and North American security.

NP-UN: What do you think about updating and upgrading Canada-Ukraine Free Trade Agreement on the background of Ukraine’s trade deficit with Canada in 2020?

Yvan Baker: I am in favour of continuous improvements to the Canada-Ukraine Free Trade Agreement. I think there’s a number of other issues that cause Ukraine’s trade deficit, unrelated to the free trade agreement. For example, Ukraine is undertaking reforms of its judicial system, and Canada has invested a significant amount of money in helping in those reforms. Canada has also helped to reform Ukraine’s police and other institutions. These reforms are really critical for the success of Ukraine’s foreign investment and trade.