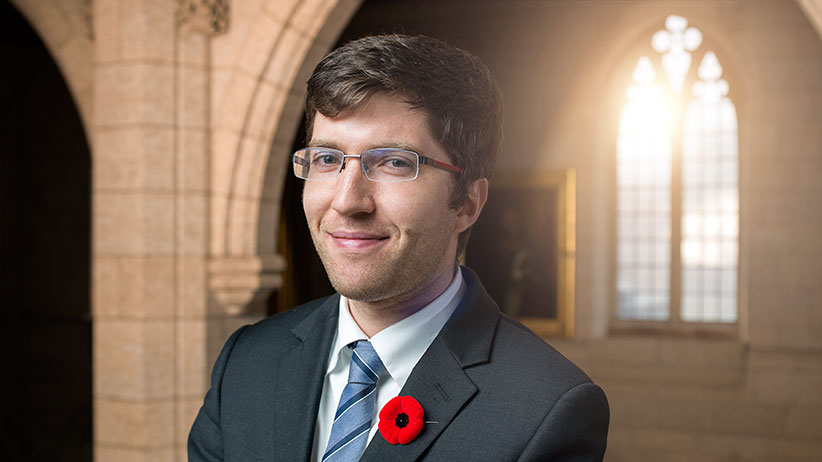 Garnett Genuis has been MP for Sherwood Park – Fort Saskatchewan (Alberta) since 2015. He has gained a reputation for being among the most outspoken parliamentarians and was voted by his colleagues the 2017 Parliamentarian of the Year. He has served as the Shadow Minister for International Development & Human Rights and as Shadow Minister for Multiculturalism and for Canada-China Relations. In his riding, around 18% of the people are of Ukrainian ethnic origin. Genuis is now running as a Conservative candidate for for Sherwood Park – Fort Saskatchewan.

Garnett Genuis: Conservatives have a long-term plan rooted in recognizing the value of strong community, strong family and the important role of the private sector. The Liberals have taken the short-term approach. They have no meaningful fiscal control, and they’re presiding over the ever-greater expansion of government control and intrusion.

NP-UN: In this election, there have been some heated moments, especially during the last debate, but the Conservatives, it seems, have not chosen a very aggressive position. What is your election strategy, and to what do you contribute the shift in opinion polls favouring the Conservatives?

Garnett Genuis: Conservatives have gained a lot of momentum in this campaign. We’ve done it by presenting a positive vision for economic recovery and growth. I think the Liberals, by contrast, have run a very negative campaign. They have not talked about their record. Instead, they tried to attack other people and spread often false information about their opponents. And I think Canadians prefer the approach we’re taking, and they like the plan that we offered.

NP-UN: There have been some angry rallies in different places in Canada against the Liberals. Do you think the Conservatives are capitalizing on this anger that exists in some groups of the population?

Garnett Genuis: I think there is a lot of people who have been hurt as a result of the failures of the Liberal government. Some people have lost jobs, opportunities, businesses, people are suffering due to immigration processing delays and other problems. And they’re looking for alternatives. And at the same time, they’re not looking for just anybody out there but for an alternative plan.

NP-UN: Can you clarify the position of the Conservatives on mandatory vaccinations, particularly for federal employees, and on vaccine passports?

NP-UN: The federal government is now looking to establish national standards of long-term care. What are your party’s positions on establishing such standards?

Garnett Genuis: Conservatives have a plan to support long-term care, investing $3 billion in infrastructure funding over the next three years to renovate long-term care homes in all provinces, encouraging more partnerships as well as supporting personal support workers, making a priority in immigration programs for those who work in long-term care or home care, and having a national task force on credential recognition to help support credential recognition for newcomers. Too often, when it comes to federal-provincial relations, we see under Justin Trudeau, a federal government that wants to blame the provinces but isn’t prepared to act to help. A federal Conservative government under Erin O’Toole would be a constructive partner with provinces, which would invest in long-term care. We would respect provincial jurisdiction, but we would make investments and take action. Regarding national standards, we would take a different approach when it comes to relations with the provinces, which is investing and supporting without telling them how to manage their administration details. This would be a constructive, supportive approach that we would take.

NP-UN: What are the differences in the Conservative and Liberal approaches to the sanctions against Russia and Ukraine’s prospects of joining NATO?

Garnett Genuis: Our approach would be very different from the Liberal approach. We would be a strong supporter of democracies and people seeking democracy around the world. We would stand up for justice and human rights in every case. Under the Liberals, we’ve seen efforts to curry favour with the world dictators and weaken our support for democracy. So, when it comes to sanctions, remember, it was a Conservative bill that created the Magnitsky sanctions in the first place. But we haven’t seen sanctions used as much by this government as they could be. We’ve committed to expanding the Magnitsky act and creating a mechanism by which parliamentarians and even groups of citizens can petition to have names added to the Magnitsky Act and require the minister to respond in writing to those petitions as part of our detailed human rights policy. And this is important in the context of Russia as well. We’ve committed to creating prisoners of conscience of particular concern public list, highlighting cases of prisoners of conscience when a government like the Russian government tries to silence people. And we’ve also committed to creating an international human rights advisory body to be made up of representatives of different communities. Our platform contains commitments to intensify Operation UNIFIER, increase Canadian Armed Forces military training and capacity building in Ukraine, supply Ukraine with lethal weapons and reinstate provisions of RADARSAT imageries to Ukraine.

NP-UN: To finish off, a general question. Do you think, with the generational change, is Canada becoming more liberal or more conservative, or is the status quo remaining in terms of economic and cultural issues?

Garnett Genuis: I think there is a lot of different ways of categorizing opinions. What I can say, in this campaign, people are responding very well to our positive methods; people understand the need for protection of long-term economic stability, for fiscal prudence, for respect for individual autonomy, as well as for inclusion and pluralism. More and more people are talking about security issues, foreign policy issues and wanting to see Canada be a principled leader once again on the world stage. From my perspective, these are conservative principles and ones that people have been responding to very well throughout the campaign.