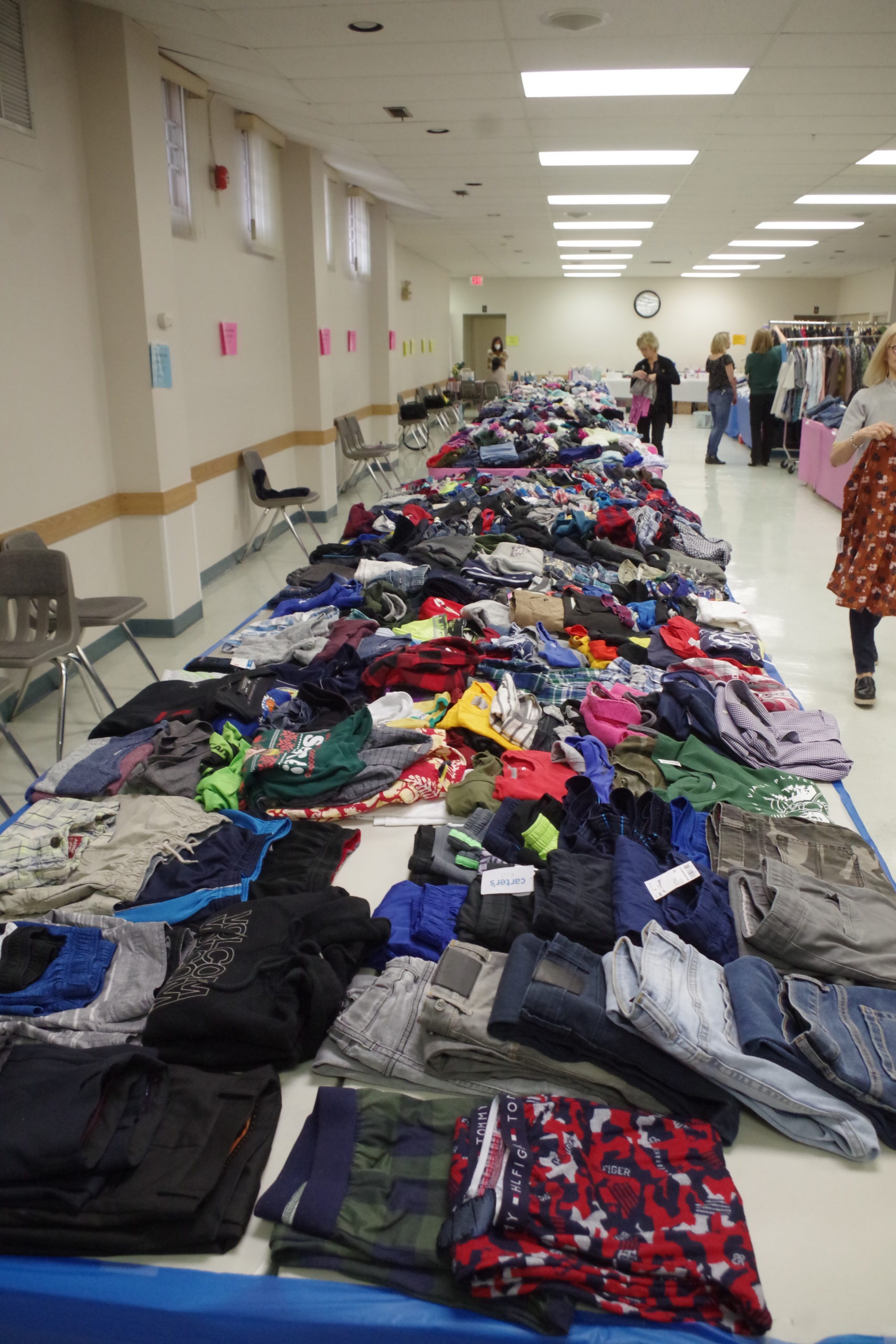 More “shopping events” planned after the success of the first one.

A clothing drive organized to help Ukrainian refugees in Edmonton with donations from the community proved to be so successful that more such bazaars are planned.

“We initially only created one shopping day event, as we wanted to see the response, and go from there. We are thrilled to say the response has been really positive and we are hoping to set up some more shopping event dates soon,” says Christina Csernyanski, chief organizer of the first one, which was held at St. Nicholas Ukrainian Catholic Church. 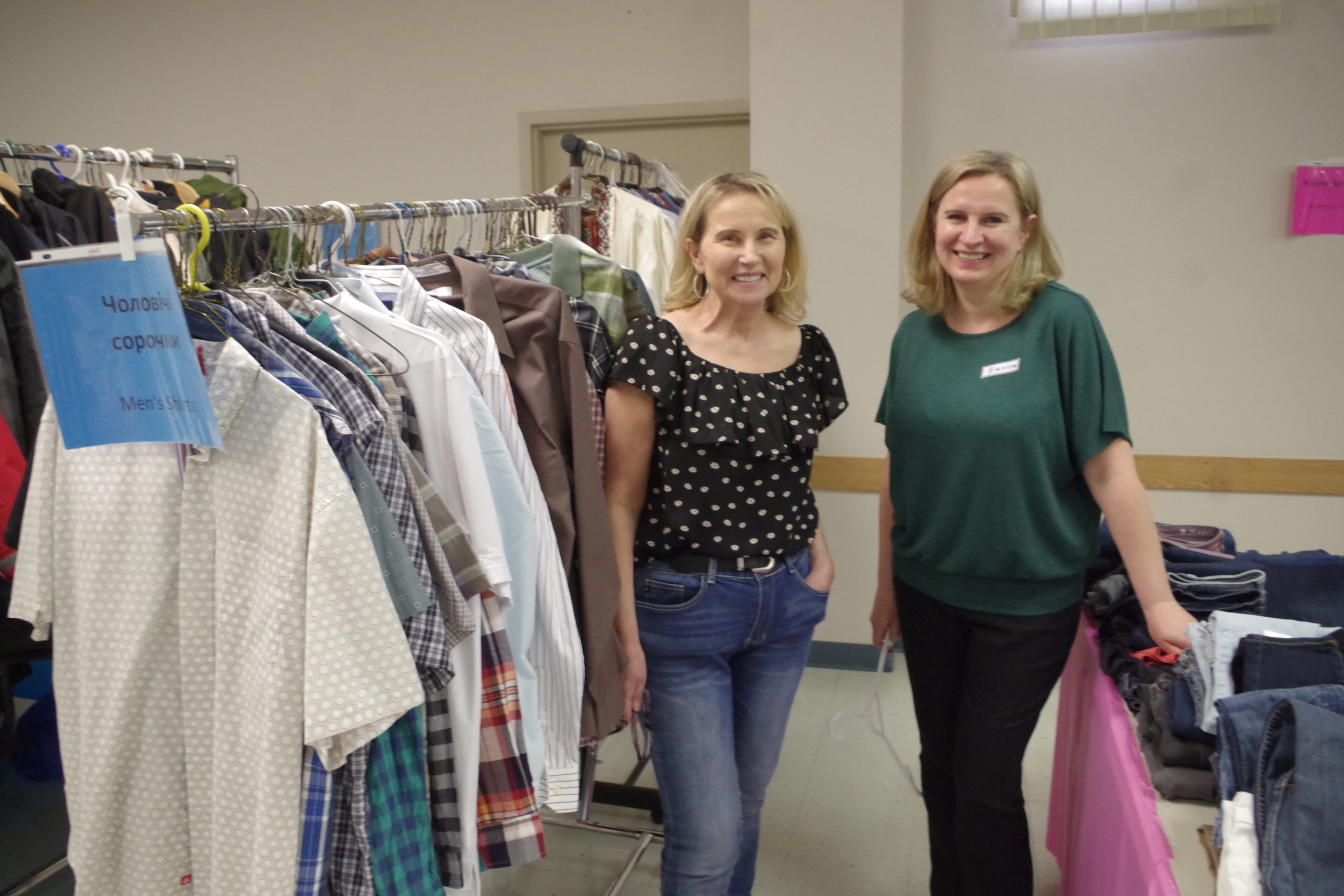 “We have had over 1000 bags of donations from various parishes in the eparchy, organizations, and individuals. We are especially grateful to the parishes that pre sorted, organized and dropped off all together. It has made it a lot easier for us and volunteers.

“We had over 40 families come to our first shopping event. We filled up spots within a week and the response has been very positive. Families have been so humble and appreciative. It has been so great, especially to see he children with some new toys! The expressions on their faces have been priceless!” she added.

The clothes were sorted and put on display in the basement of the church and refugees could come and pick what they wanted at no cost.

Olena, who comes from Odesa was one of those. She left Odesa with her husband and two children going through Moldava, Slovakia and finally Poland where it took her a month and a half to get her visa approved to come to Canada under the Canada-Ukraine authorization for emergency travel (CUAET) program. She has friends and relatives in Canada and her husband, who as a citizen of Venezuela was allowed to leave, had a job waiting for him here.

But they, along with their two children, came with only two suitcases so this shopping event was a great benefit to them.

“Everybody tries to help. It’s really incredible,” she said.

Another shopper, Natalia from Kyiv, who came with one child only had a suitcase which she bought in Europe. Her son Mykyta was already in Vegreville playing with the Junior A Vipers. People in Vegreville collected donations to cover the $1200 air fare. Otherwise, they would not have been able to afford it.

Tetiana, who comes from Yurivka, located 90 kilometres west of Kyiv, was also fortunate enough to get plane fare for herself, her two children and mother-in-law paid for by generous donors. Her husband is serving in the army.

While she’s grateful for the clothing she can get for her children “just knowing that there are more good people than bad in this world already helps Csernyanski says the Russian invasion of Ukraine has been unimaginable and during the first days and weeks, friends and family were all in disbelief. 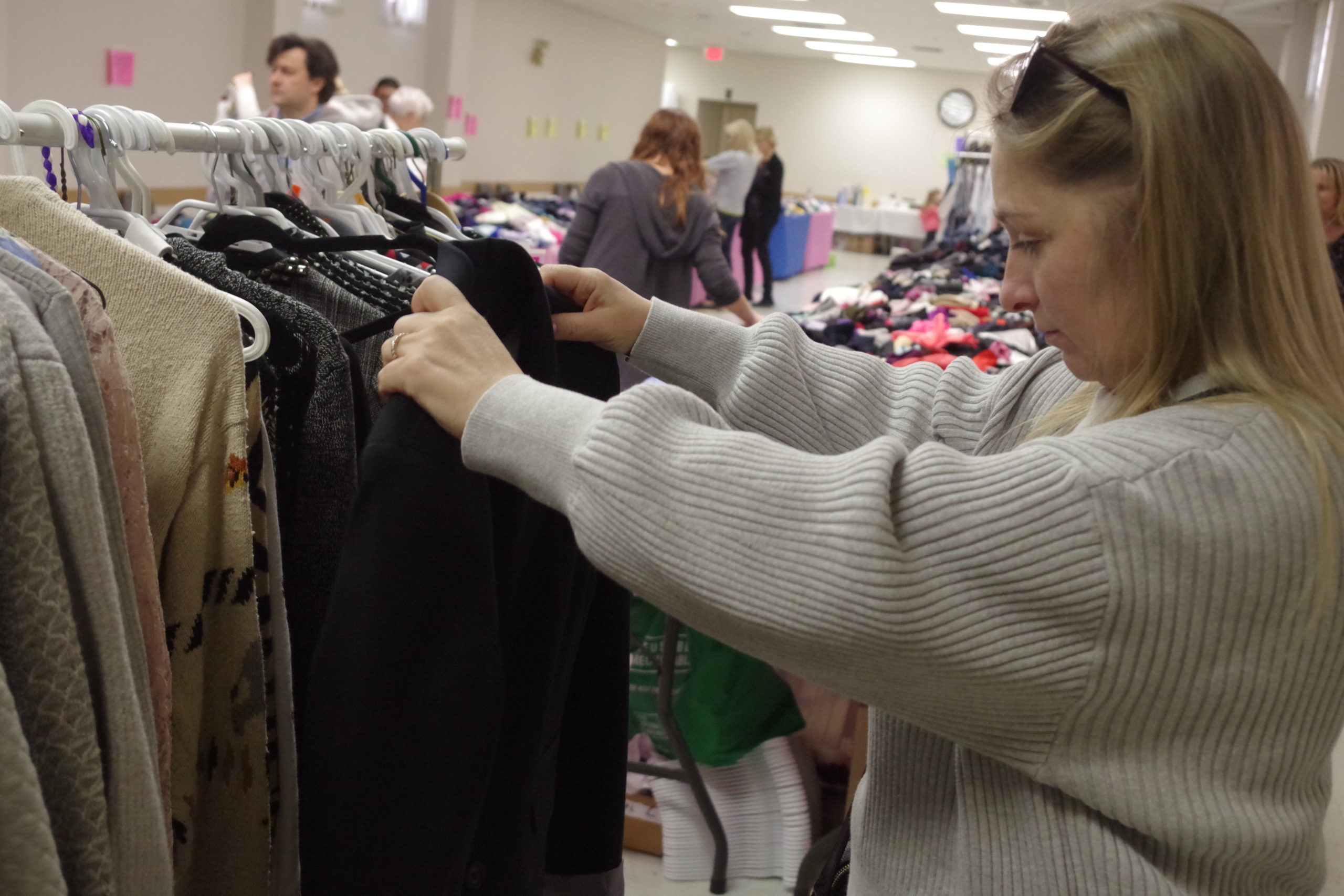 Olena from Odesa checks out the display

“Our hearts were breaking, and we were constantly worried. We are all of Ukrainian heritage and do our best to keep our culture and language alive, and some of us have friends and family in Ukraine, so it has hit close to home.

“Personally, I have a very close connection to Ukraine, I have studied, volunteered, lived and worked there. It holds a special place in my heart.

“One of the strongest feelings we all had is the feeling of helplessness. What can we do? How can we help?

“We have been involved in the rallies, the prayer services, writing to government officials, sharing reliable and true information and have been supporting any way we can, but seeing what people have been going through on a daily basis we wanted to do more.

Thus, she and her cousin Kaitlyn started to collect a small amount of clothing for family members who were possibly coming to Canada from Ukraine.

“From there the more people I talked to the more I realized people wanted to help and were looking for some way to do something, as we were all feeling very helpless. I reached out to the organizers of an amazing event called Pass It On, in Calgary (St. Stephen’s Parish), and they gave me a ton of insight, information and encouragement on how to run a successful clothing drive. From there I reached out to friends, and family asking if anyone wanted to join a core crew of organizers for a potential clothing drive and shopping event for Ukrainian families fleeing the war. Christina Boisvert, Kaitlyn Oszust, Lauren Oszust, Rebecca Kuchmak and myself make up the organizing committee,” says Csernyanski.

She contacted her parish priest, Father Julian Bilij and Bishop David, Eparch of Edmonton and received their full support and blessing. The drive is supported under the umbrella of the Edmonton Eparchy.

To make the families feel comfortable and at home, refreshments and food are available in the basement and the church is open for anyone wishing to spend time in prayer

“Our volunteers are fantastic and friendly and go out of their way to help each family find what they need. We have been blessed with many gift card donations, and have been able to hand those out to families with specific needs,” says Csernyanski.

The response has been so tremendous that right now they are not accepting anymore adult clothing donations. There will be another clothing drive specifically for the most needed items — new or excellent condition children’s clothes, children’s toys toiletries, hair tools, new shoes and new underwear for all ages and genders. More information will be provided in the future.

If anyone has any questions please e-mail : [email protected]