Edmonton Eparchy conducts pilgrimage to venerate Our Lady of Guadalupe

Thirty faithful, most of them, from the Ukrainian Catholic Eparchy joined their spiritual guides Bishop David (Motiuk) and Father Daniel Wach on an eight-day pilgrimage to Mexico City to view the miraculous image of Our Lady of Guadalupe, November 8 – 16.

This venerated image, which was superimposed on a tilma, or cloak, belonging to indigenous peasant Juan Diego in 1531 during the fourth apparition of the Blessed Mother of God, is enshrined within the Minor Basilica of Our Lady of Guadalupe in Mexico City. The basilica is the most visited Catholic pilgrimage site in the world, and the world's third most-visited sacred site. Made from ixtle, an agave fibre which easily disintegrates in about 20 years, it has nevertheless survived intact for almost 500.

“The image baffles scientists and the curious even today as we have no explanation as to how it was made, with no brush strokes, seemingly simply hovering above the piece of fabric. But what a powerful image, filled with signs and symbols easily read and interpreted by the locals, prompting them to believe that Mary, the Mother of God, was a powerful messenger from God. Millions were baptized in a matter of years,” explains Bishop David, Eparch of Edmonton.

“When Mary appeared to Juan Diego, a peasant, she asked that a church be built in her honour upon a hilltop for all to see, and go tell the local bishop to do so. The bishop was not initially convinced, after all, it's not every day that the Mother of God appears from heaven on earth. The bishop asked for a sign by way of confirmation. The result, the image of Our Lady upon Juan Diego's tilma,” he added. 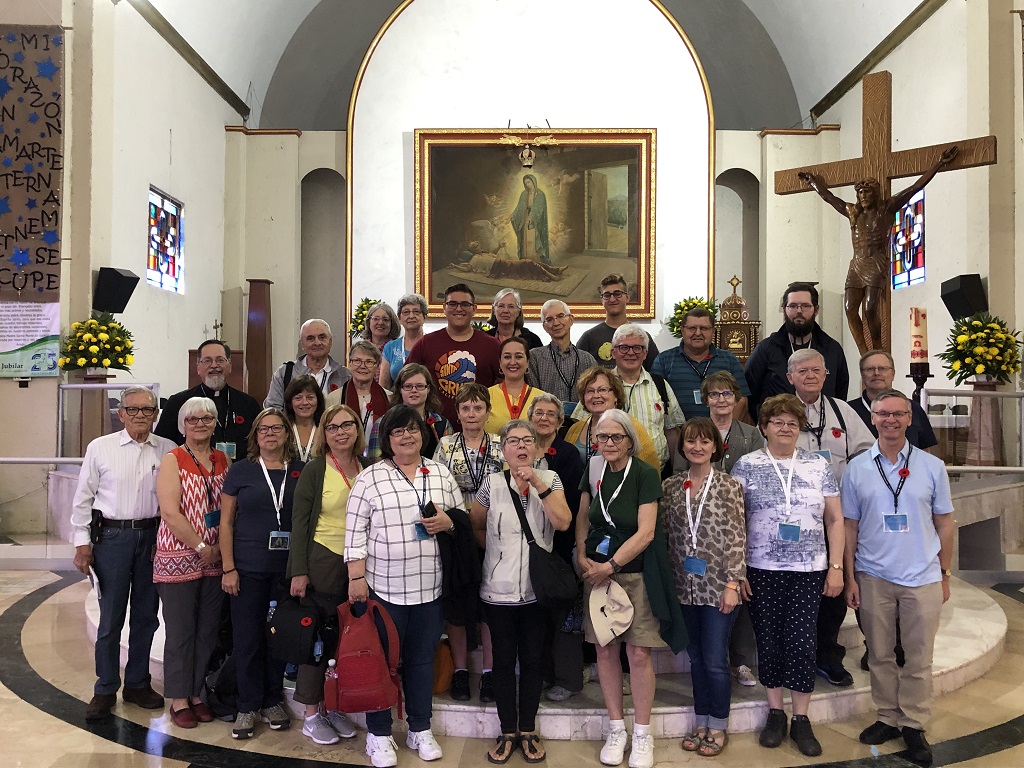 The pilgrims at the church of the 5th Apparition – where Our Lady appeared to the Juan Bernardino, the uncle of Juan Diego, and cured him

The image has layers of meaning to the indigenous people of Mexico and was a way of integrating Christianity with their own native traditions.

Roman Kravec, one of the participants of the pilgrimage, found parallels between the experience of the indigenous people of Mexico and that of Ukrainians.

“The highlight for me happened when I walked into the plaza on the Sunday, the first day of our pilgrimage,” he recalled.

“The plaza was filled with people. I could hear the sounds of drums, and then I saw the natives doing a line dance. I was moved to tears by the sounds and sights. I thought, ‘If Mary hadn’t appeared to the people as an Aztec maiden, they wouldn’t have converted, and in that case, they would have become extinct. The Spaniards had turned them into slaves, persecuted them, downgraded them. They would not have survived if they hadn’t become Christian. But as fellow Catholics, the Spaniards couldn’t enslave them anymore, and were forced to begin to respect them.

“That reminded me of the history of Christianity in Ukraine. If our ancestors hadn’t converted, we too would have become extinct.

“And that, in turn, reminds me of Our Lady of Pochaiv, where she appeared on the walls of the monastery that was being used as a defensive castle by the Ukrainians in 1675. Any missile sent against them by the Turks was redirected back at them. How ironic, then, that the Pochaiv monastery is now in the hands of the Russian Orthodox church, who are certainly no friends our ours,” he added.

“It is remarkable that it has survived so long and put up with so much including a bomb attack. I was impressed by the faith of the ordinary Mexicans who visited the Basilica in such great numbers,” offered another pilgrim, Romuald (Ronnie) Lakowski.

On the second day, Bishop David and Father Daniel conducted a Divine Liturgy Mass in Tulpetlac, at the Church of the Fifth Apparition, after which tour participants travelled to the Teotihuacan Archaeological Site, one of the most impressive cities of the ancient world, held sacred by the Aztecs. There, they explored its temples, palaces and pyramids, including the Quetzalpapalotl Palace Complex, the Temple of the Feathered Conches, the Pyramid of the Moon, and the immense Pyramid of the Sun, ranked among the biggest in the world.

The third day featured a tour of Mexico City, built on top of the ruins of the Aztec capital of Tenochtitlan. It began with a visit to the Church of the Holy Family, which includes a museum dedicated to Father Pro, a 20th century martyr who was executed by anti-clerical government forces. Next, the pilgrims celebrated Liturgy followed by a visit to the Palacio Nacional, which contains famed artist Diego de Rivera epic murals on the history of Mexico. After that, they toured the National Museum of Anthropology, which contains one of the world’s largest collections of archaeological and anthropological artefacts from the Mayan civilizations to the Spanish conquest.

On the fourth day the pilgrims travelled to Tlaxcala and celebrated Liturgy at the San Miguel del Milagro Shrine where St. Michael the Archangel appeared to Diego Lazaro in 1631 – a century after the Marian apparitions. Conducting the Liturgy was quite the challenge for Bishop David and Father Dan, as the villagers were celebrating the feast day of St. Michael with firecrackers that resounded throughout the service. 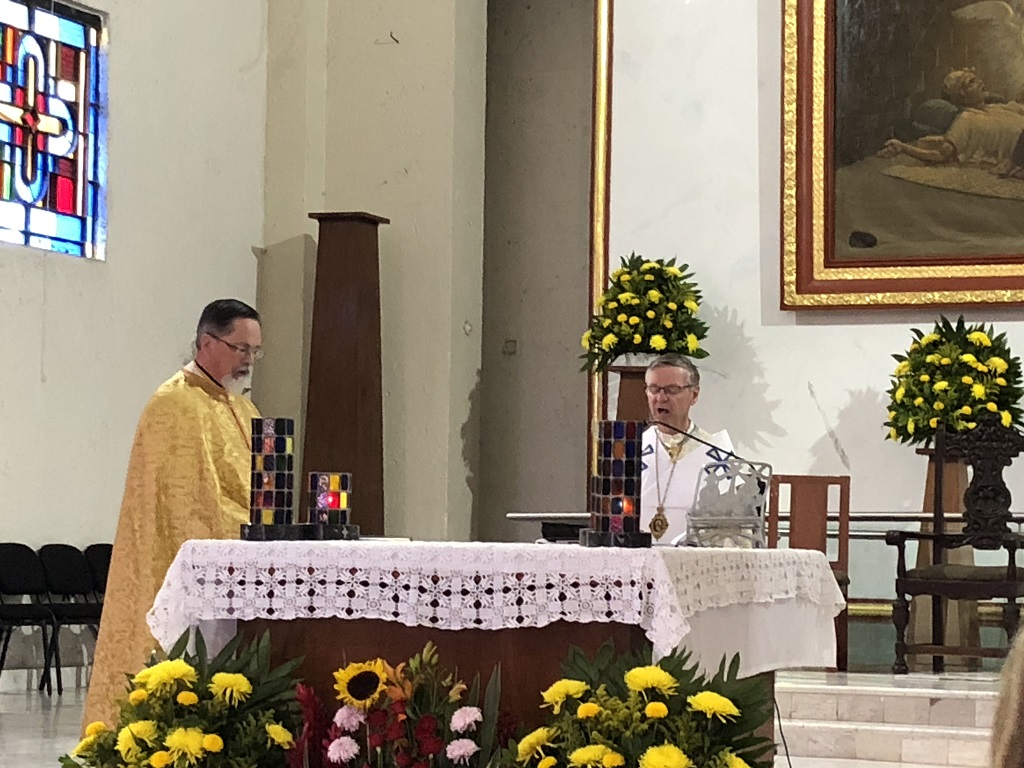 The fourth day included a visit to the city of Puebla with the second largest cathedral in Mexico as well as the Templo de San Francisco – where the uncorrupted body of San Sebastian de Aparicio lies. He was a Spanish colonist in Mexico shortly after its conquest by Spain, who after a lifetime as a rancher and road builder entered the Order of Friars Minor as a lay brother. He spent the next 26 years of his long life as a beggar for the Order and died with a great reputation for holiness.

On the fifth day the pilgrims visited Coyoacan, followed by a boat trip along the floating gardens of Xochimilco in the south of Mexico City.

The last day before their return to Edmonton included one last visit to the Shrine of Guadalupe.

“Did we really travel to Mexico City to see this miraculous image not made with human hands? Yes, but much more,” recalls Bishop David.

“I, for one, wanted to strengthen my faith in the Living God that broke through time and space to encounter Juan Diego and the people of his day. And God does not disappoint. I come away from my pilgrimage with a renewed sense of wonder and awe that it is this same God, who is not bound by time and space, but continuously breaks through the heavens to appear on earth this Christmas and each day to tell us of his love for all humanity and creation. Our Pilgrimage to Our Lady of Guadalupe? Definitely, an early Christmas present!”