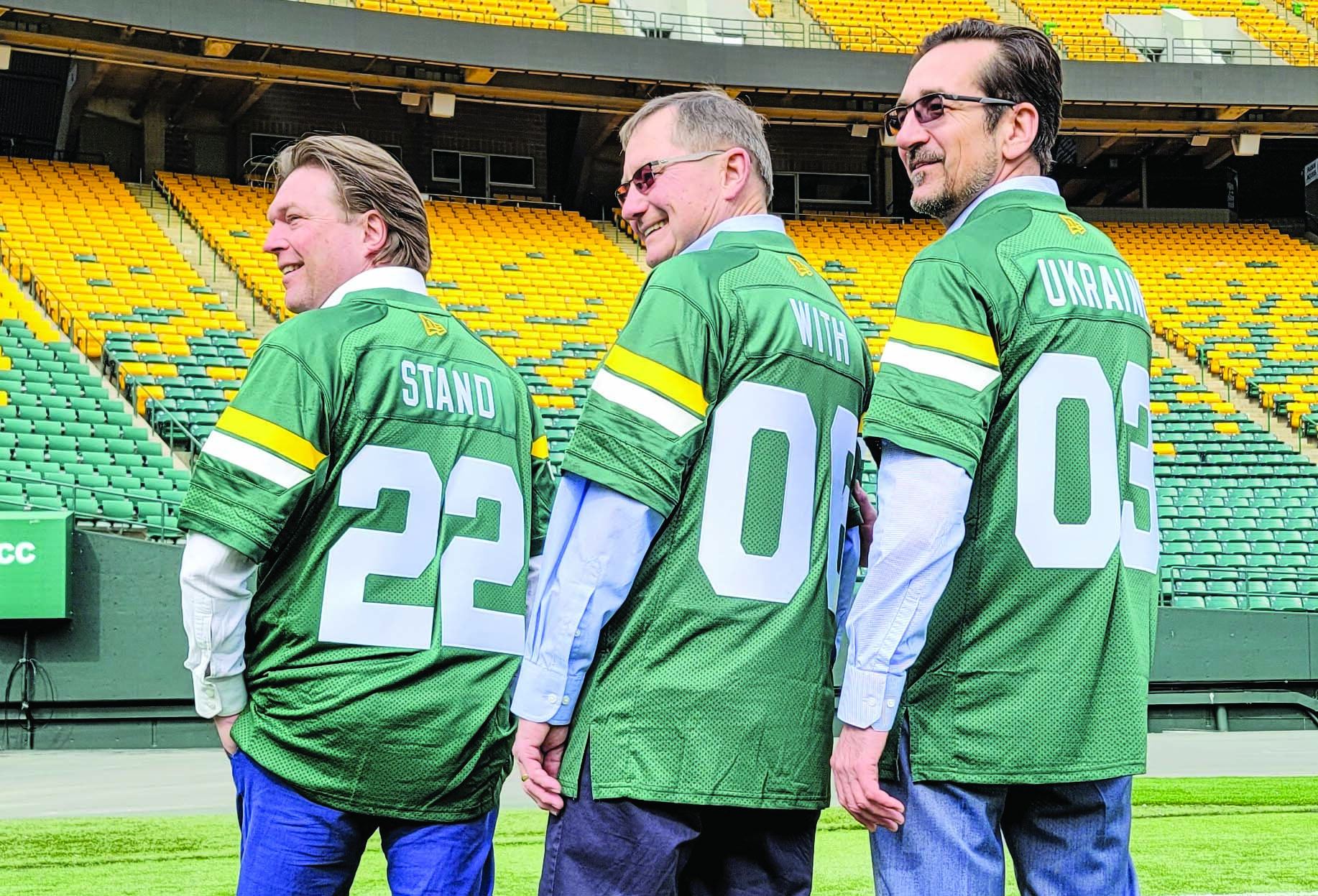 The Edmonton Elks decided to make a show of support for Ukraine at their first pre-season home game of 2022.

Tickets were sold for $15 with net proceeds from that and the 50/50 draw going to the Canada Ukraine Foundation (CUF). Over $35,000 were raised.

“As a community-owned team, we have a responsibility to give hope, inspiration, and provide action to Edmontonians on important issues. Supporting the people of Ukraine is a cause that resonates throughout our community, given our city’s deep ties with the Ukrainian people,” Elks’ president and CEO Victor Cui said in a statement.

Both a bilingual (English and Ukrainian) of O Canada and a heartfelt Ukrainian national anthem were sung by the Viter Ukrainian Folk Choir, conducted by Lesia Pohoreski. 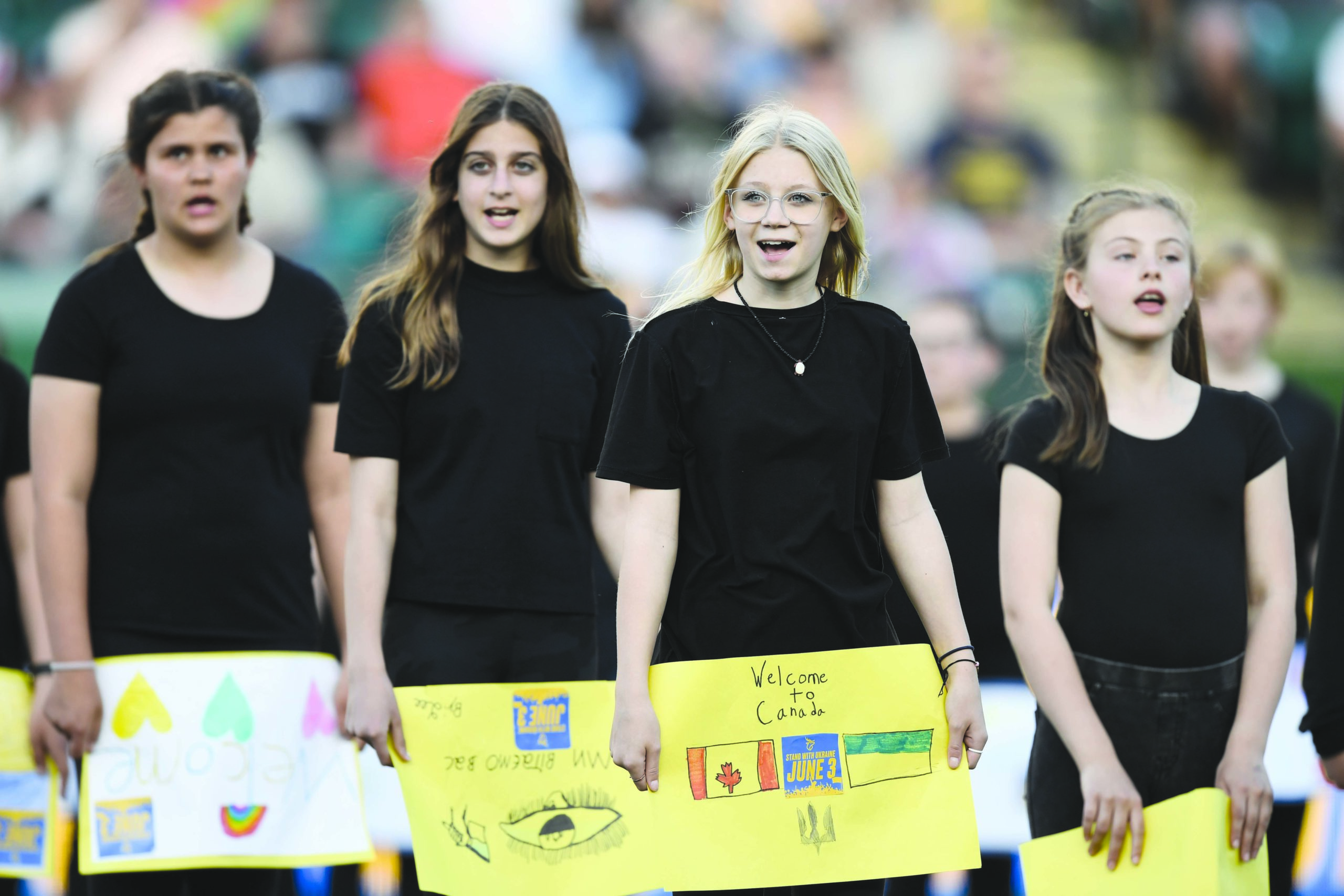 At halftime more than 200 students from St. Theresa Catholic Middle School, in Sherwood Park, plus Sifton Elementary and St. Matthew’s Elementary in Edmonton, also conducted by Pohoreski, a choir director and music teacher at St. Theresa, sang new lyrics to Leonard Cohen’s Hallelujah, that were written by a teacher in Cornwall, England.

“The students were amazing! Staff from all schools give of their time to come and support the students and support Ukraine,” Pohoreski told New Pathway – Ukrainian News.

“When we were working on this song, our focus was to not give up hope and that together we will stand for Ukraine, and support those coming to Canada, to Sherwood Park and to Edmonton. Students also made posters welcoming Ukrainian nationals to Canada. These were on the back of blue and yellow paper. Students raised the papers at the end of the song and made a Ukrainian flag. It was powerful and emotional. To see people in the stands giving the children a genuine standing ovation was amazing!

“These grade 5 and 6 students understood why they were singing. It was genuine, from the heart “raising of their voices” to support Ukraine.

“I was overwhelmed when we were ending our song and the students were proudly holding up their blue or yellow papers and hanging on to the last note – until a warm strong applause came from the fans at the game. I wish I had been able to capture a photo of the look on the children’s faces,” she added.

“It was a beautiful and emotional night. The flags, the anthem, the vyshyvanky (embroidered shirts) in the crowd, the hundreds of Ukrainian bilingual students singing a special version of ‘Hallelujah’, followed by Shumka’s whirlwind hopak had me crying and cheering at different times. The crowd support and reaction was moving and inspiring as well. So much money was raised and our culture was respected and celebrated. I’ll remember it forever,” said Shumka’s Executive Director Darka Tarnawsky. 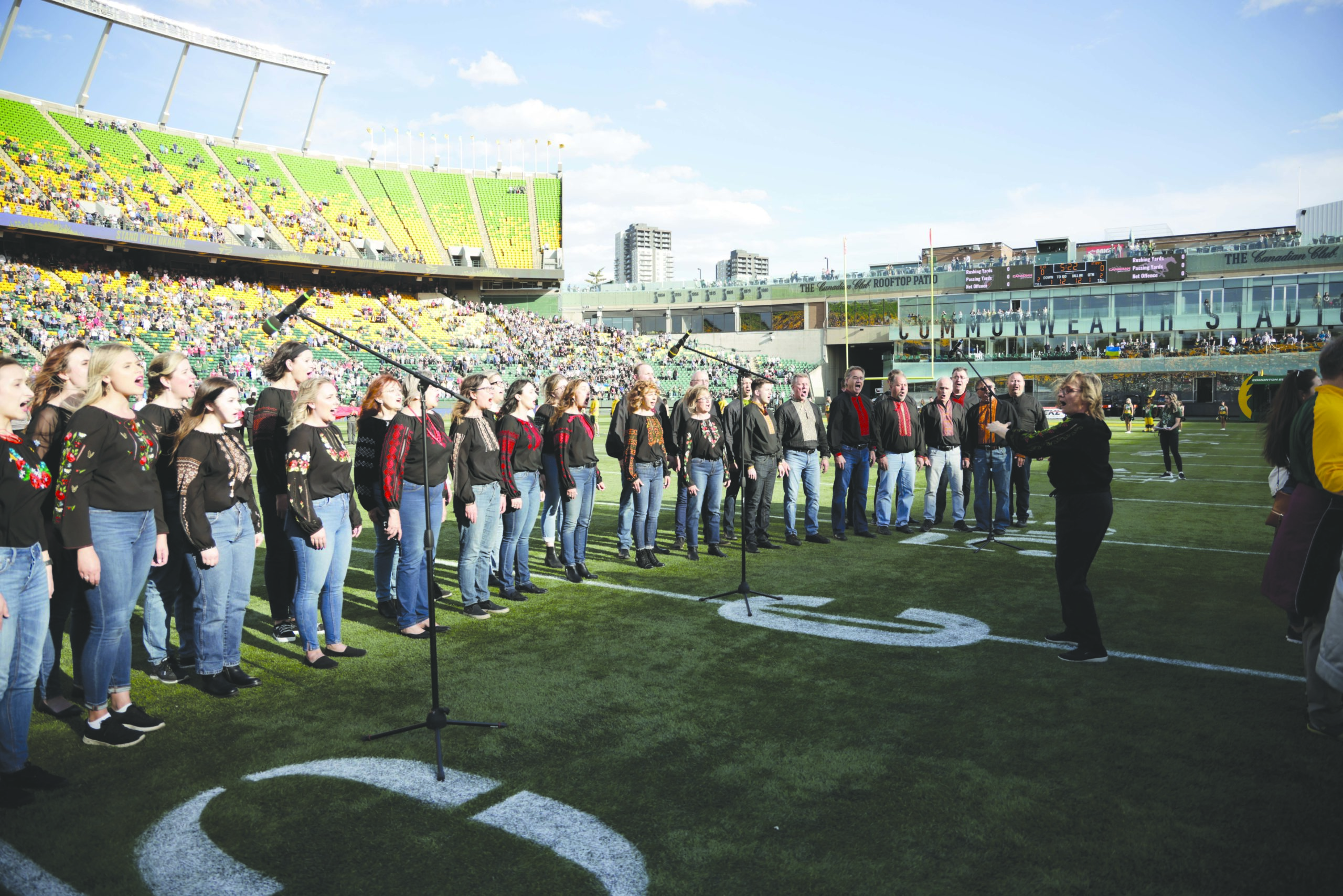 The idea for this show of solidarity came from the Elks management with the support of former Alberta Premier Ed Stelmach, former Alberta Deputy Premier Thomas A. Lukaszuk and Ukraine’s Consul General for Edmonton Oleksandr Danyleiko.

“This is something Ed and I are very passionate about. Over the last few weeks, we on the numerous committees that promoted this game and solicited corporate donations for ticket sales,” said Lukaszuk.

“This event turned out to be a success, as we have sold three times the number of tickets that usually is sold for a pre-season opener game. Many people, who are not normally football fans, showed up to support the cause. Also, this event raised an awareness of the ongoing need for assistance for Ukraine,” he added.

On the filed, Edmonton lost 37-7 to the Calgary Stampeders.

Lukaszuk said he and Stelmach plan to continue staying focussed on shipping containers of medical equipment and other necessary products to Ukrainians. “We anticipate that about six more containers will be leaving our warehouse in the next couple of weeks,” Lukaszuk said.

Lukaszuk and Stelmach had earlier organized the donation of the Polish Lot airline which came to pick up medical equipment and other humanitarian supplies from Edmonton on March 28. It also brought 62 displaced Ukrainians in the first major airlift since the ward began. 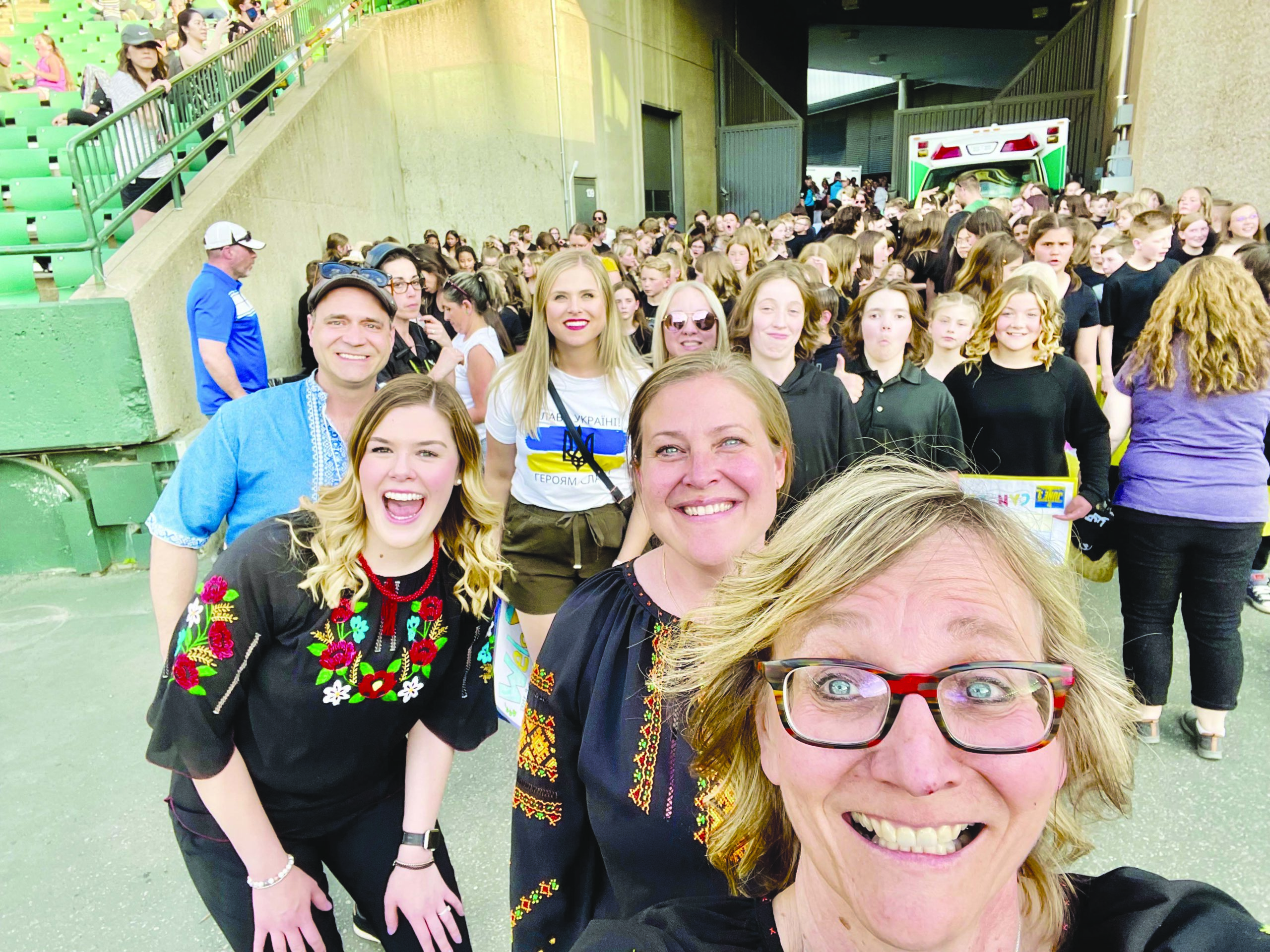 Stelmach says there has been much support throughout Alberta and in many of the rural centres in the Ukrainian settlement area. Two of the most successful fundraising events were held in Grassland and Athabasca. “Albertans have been incredibly generous. If it wasn’t for the generosity of Albertans we wouldn’t have been able to put not only the cash donations, but all of the various goods and services… we had the warehouse donated, we had the trucks donated, and we had volunteers by the dozen.”

Stelmach is channeling much of the Ukraine aid through his own Ed Stelmach Community Foundation, founded with his wife Marie in 2007 when he was still premier.

Though it is a fundraising as opposed to operating charity, it can issue tax receipts for any donations that it passes on the CUF which maintains a network of volunteers meeting the immediate needs of Ukrainians – even under war conditions.

For more information about the Ed Stelmach Community Foundation, go to:
edstelmachfoundation.com