Day of the National Flag of Ukraine in Edmonton 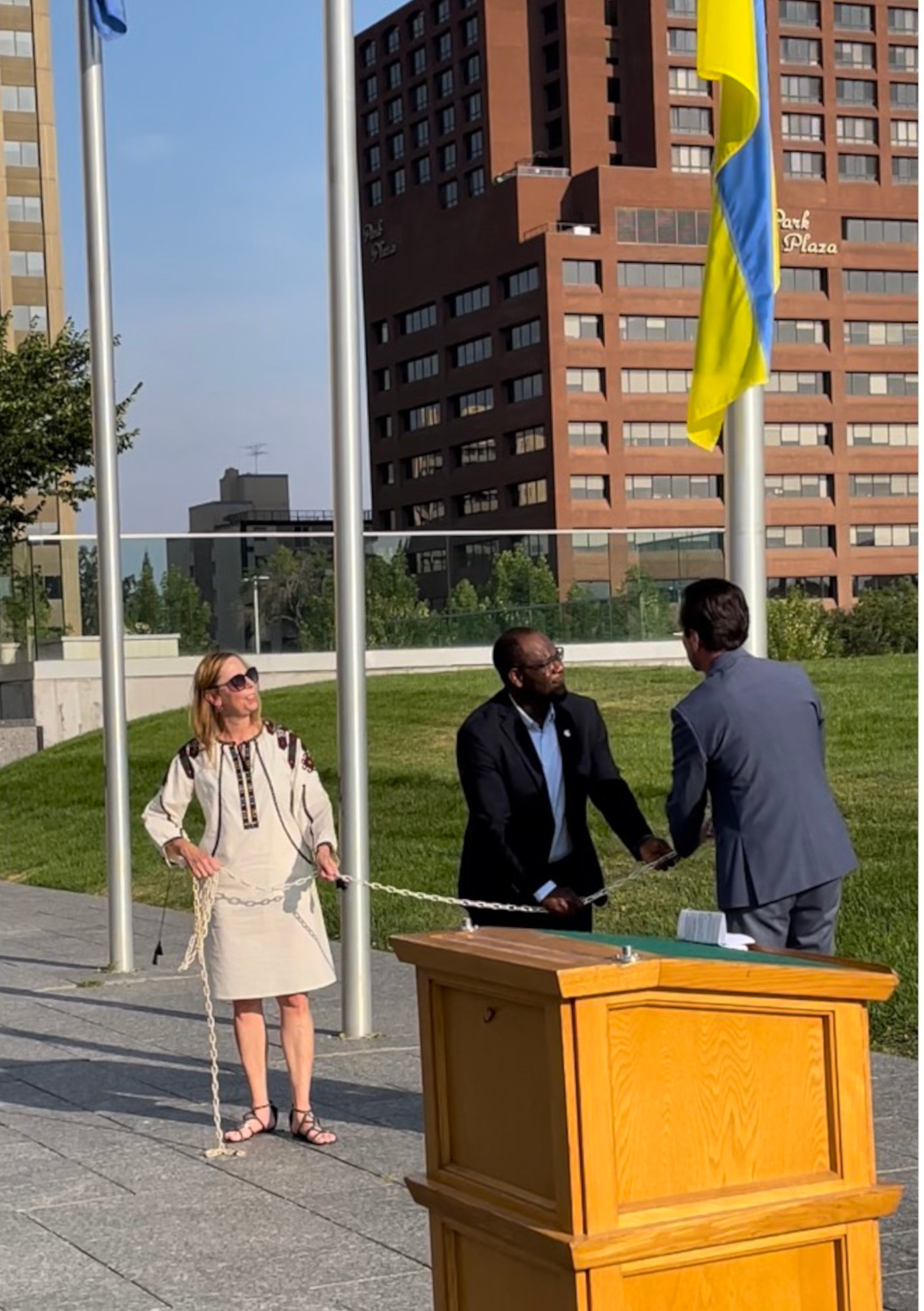 On August 23, 2022, Ukrainians in Edmonton celebrated the Day of the National Flag of Ukraine. A symbolic flag raising ceremony took place on the grounds of the Federal Building in downtown Edmonton. This event was organized by the Consulate General of Ukraine and supported by the Ukrainian Canadian Congress-Alberta Provincial Council (UCC-APC).

Danyleiko’s remarks were bilingual, and he stated: “This is a very important celebration, for us, especially these days when the Russians invaded Ukraine exactly half a year ago. And this celebration is very important for us today because they wanted to take from us everything we have; our land, our cities, our people, they are killing our citizens, our children, our women everyday. They wanted to just destroy us as a nation and they wanted to destroy Ukraine and they wanted us not to have the opportunity to raise our flag above our heads any time in the future, but they will never succeed.”

“I just want to give some figures for you to understand the scale of Russian aggression, scale of destruction of Ukraine for this half year of war. The Russians damaged and destroyed more than 38,000 civil and infrastructure facilities, including 28,700 residential buildings, 1,600 educational and 280 medical institutions, 298 cultural heritage sites and 153 religious buildings, almost 800,000 Ukrainians lost their homes, about 14 million people had to leave their homes and about half of them left the country, fleeing the war. This is a tragedy for our country, this is a tragedy for our people, but we are fighting bravely, and we will defeat our enemy for sure. But to defeat our enemy, to defeat the Russian invaders we need support from international society, and I would like to thank Canada and Alberta and the Government of Alberta for the enormous support you provided to Ukraine and the Ukrainian people.”

Danyleiko further gratefully acknowledged that “the Government of Alberta already provided $11-$12 million of support to Ukraine and Ukrainians coming here to Canada fleeing the war and in late July I know the government announced a new initiative to provide more support for childcare and housing for Ukrainians coming here to Alberta. This is very important. I would like to say that unfortunately, war is going on and Putin is not going to stop, and we need more and more support from our international friends and partners. I would just like to ask you, please, do support Ukraine, support the Ukrainians coming here because we really need it.”

Madu spoke from the heart and stated: “On behalf of Premier Jason Kenney and the government of Alberta I am very pleased to attend this ceremony marking the Day of the National Flag of Ukraine…I welcome all of you for being here raising the Ukrainian flag today at a time when the very notion of Ukraine’s independence is under attack. This past six months have been a terrible time for the people of Ukraine and a time of shared sorrow for the people of the world. Thirty-one years ago, tomorrow, Aug 24 in1991, the Ukrainian flag was raised to declare Ukraine’s independence. Today at the Alberta’s legislature we raise the flag in solidarity to affirm our support for the country and the people of Ukraine. Alberta and Ukraine have a considerable history together. We have a great bond, enjoyed by two peoples and countries for generations. Later this week also I will be attending an event to commemorate 130 years since the first Ukrainians arrived in this country, before Alberta became a province. Ukrainian settlers arrived in large numbers to make a life here, in our province. Alberta became the cradle of Ukrainian settlement in Canada. They adapted, they thrived and built a future for themselves, and their children Ukrainians prevailed, and their story of trial and triumph has inspired all Albertans of every background.”

Minister Madu continued: “Once again, great numbers of Ukrainians are coming to Alberta. This time to escape the Russian invasion and ongoing war. Between the start of this deadly conflict, senseless conflict six months ago and the start of August, more than 7600 have arrived in our province with an average of 500 arriving each week. Alberta’s government is supporting those fleeing the war and helping them to settle here.”

He acknowledged the many community, aid and settlement organizations helping to address the needs of the Ukrainians arriving and specifically named the Ukrainian Canadian Congress as one of the organizations doing tremendous work in this area.

The Minister concluded by stating: “Raising the flag of Ukraine at this historic Alberta legislature today, is our way saying that while the situation in Ukraine is very tough and sad, Alberta has great confidence in the Ukrainian people’s resilience and determination. We have admired that resilience and determination for more than a century. I know it will not fail you now. We raise the flag in soli with you. We do so with our deepest hope that not before long, it will fly in the sunshine of peace over an independent land, free from war and sadness. Once gain on behalf of the gov’t of Alberta, Slava Ukraini.”

Boychuk echoed Danyleiko’s comments and passionately described the existential threat that Ukraine is facing. She also thanked Minister Madu for the support of the government and described the close cooperation between the UCC-APC and the Alberta government that has allowed to successfully address the multiple needs the community has encountered in the last six months.

Jackie Armstrong-Homeniuk, Associate Minister of Status of Women and MLA for Fort Saskatchewan-Vegreville, who also chairs the Advisory Council on Alberta-Ukraine Relations was unable to attend but sent a written message that was read by Orysia Boychuk. In her message she noted that because of events like the current Russian invasion of Ukraine and historic tragedies, like the Holodomor, freedom and independence are integral values to Ukrainians and they continue to fight to preserve them today. This day is especially significant for the 365,000 Ukrainians who call Alberta home. This year we acknowledge that the first settlers arrived 130 years ago. Alberta is lucky to have the largest population of Ukrainians in the country and to have this culture woven into the fabric of our province. As recent events have shown, independence and freedom are not something to be taken for granted. In acknowledging Ukrainian Independence Day, Alberta is also reaffirming out commitment to championing the cause of all those who are fighting for independence and freedom around the world.”

As all present sang the National Anthem of Ukraine, Minister Madu, Consul General Danyleiko and Orysia Boychuk raised the Ukrainian flag. It flew gloriously along side the flags of Canada and Alberta under the peaceful blue skies of Alberta. Slava Ukraini!