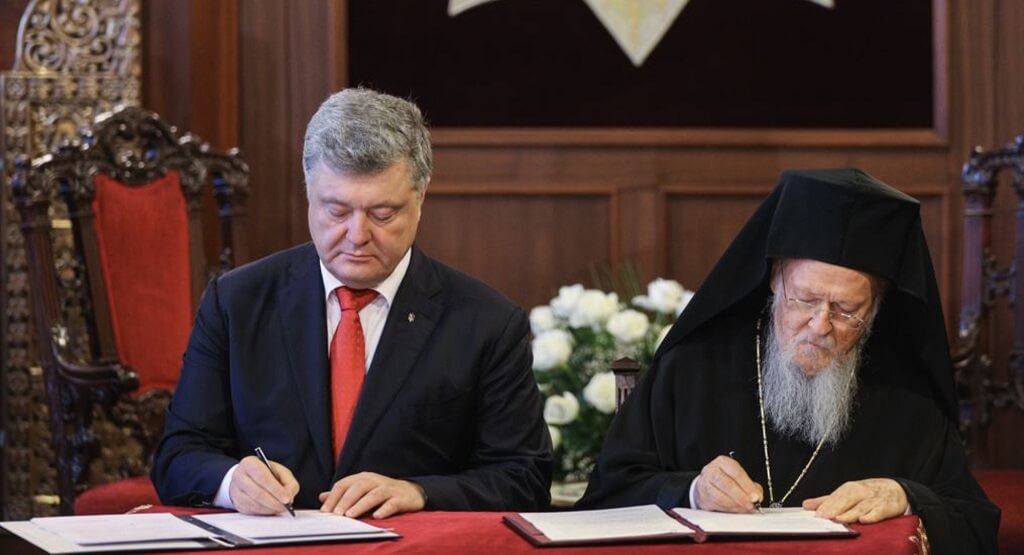 Another critical step in the path towards the creation of an independent Ukrainian Orthodox Church was taken on November 3, when Ukrainian President Petro Poroshenko and the Ecumenical Patriarch Bartholomew signed an agreement on cooperation and interaction between Kyiv and the Patriarchate of Constantinople. The meeting came after a synod of the Ecumenical Patriarchate chaired by Patriarch Bartholomew I, who is considered the leader of the 300-million-strong worldwide Orthodox community, decreed on October 11 to “proceed to the granting of Autocephaly to the Church of Ukraine.”

The agreement signed with Bartholomew lays out conditions for “the granting of the [autocephaly] tomos” – a formal decree on the Ukrainian Orthodox Church’s independence from the Russian Orthodox Church – “to proceed absolutely in strict accordance with the canons of the Orthodox church,” Poroshenko told reporters after the meeting.

As we have previously commented this is very welcome news and will constitute a critical milestone for the people of Ukraine in their quest for political and spiritual independence.

But in 1453 Constantinople fell under the rule of the Ottoman Turks and, in 1686, the Ottomans, acting on behalf of the regent of Russia, Sophia Alekseyevna, pressured the Patriarch of Constantinople into transferring ‘the Orthodox Church of Kyiv and all Rus’ from the jurisdiction of Constantinople to the Patriarch of Moscow, established a century prior to that. The legality of this step is questioned to this day along with the fact that the transfer was accompanied by graft and bribery, which in church affairs amounts to an ecclesiastical crime.

The decision to grant autocephaly to the Kyiv Patriarchate of the Ukrainian Orthodox Church also breaks another historical chain tying Ukraine to the Russian Empire.

The Moscow Patriarchate of the Russian Orthodox Church (ROC) has historically served the interests of Russian imperialism. It did so under the tsars. During the Soviet period the church became an agency of the KGB.

As Ukraine’s Consul to Edmonton, Nadia Kostenko commented during the banquet celebrating the 100th anniversary of the Ukrainian Orthodox Church of Canada at St. John’s Cathedral’s Cultural Centre, October 26: “The importance of this decision is hard to overestimate. The Orthodox church and its influence on its neighbors is one of the last remnants of the Russian empire. It is also one of the most effective instruments to spread Russian narratives and influence opinion. In the case of Ukraine, the stakes are even higher because it gives the aggressor-state direct access to the hearts and minds of Ukrainians. It’s not an overstatement to regard Ukraine’s independent church as a matter of national security. The issue of ‘Тomos’ and autocephaly goes far beyond the boundaries of church life. It is a question of our independence, a question of our statehood. This is a question of the world’s geopolitics.”

Ukraine’s Parliament declared independence on August 24, 1991, and it was on August 30, 1991, that the National Opening Ceremonies of the Centennial of Ukrainians in Canada was held at the Shaw Centre in Edmonton. And it was at these ceremonies that then-Prime Minister Brian Mulroney pledged to recognize Ukraine’s independence if the people of Ukraine supported it in a referendum.

“Canada believes that the pace of change in Ukraine will be established by the people of Ukraine themselves and no one else. And Canada pledges to respect and respect fully, the free and democratically-expressed will of the Ukrainian people whatever their decision may be,” he announced to the thunderous applause of the 4,100 people present at the event.

It remains an historical curiosity that on two momentous occasions Ukrainian Canadian Centennials have been linked with Ukrainian Independence in both the secular and spiritual domains. Perhaps it’s just another sign of the special relations between our two countries. Coincidence or not, it’s definitely welcomed.