Canadians rally in support of Pratasevich

Members of Canada’s Belarusian community spontaneously organized several demonstrations across the country to show solidarity with journalist Raman Pratasevich who was arrested by Belarusian authorities after his plane was forced to land in Minsk, May 23. 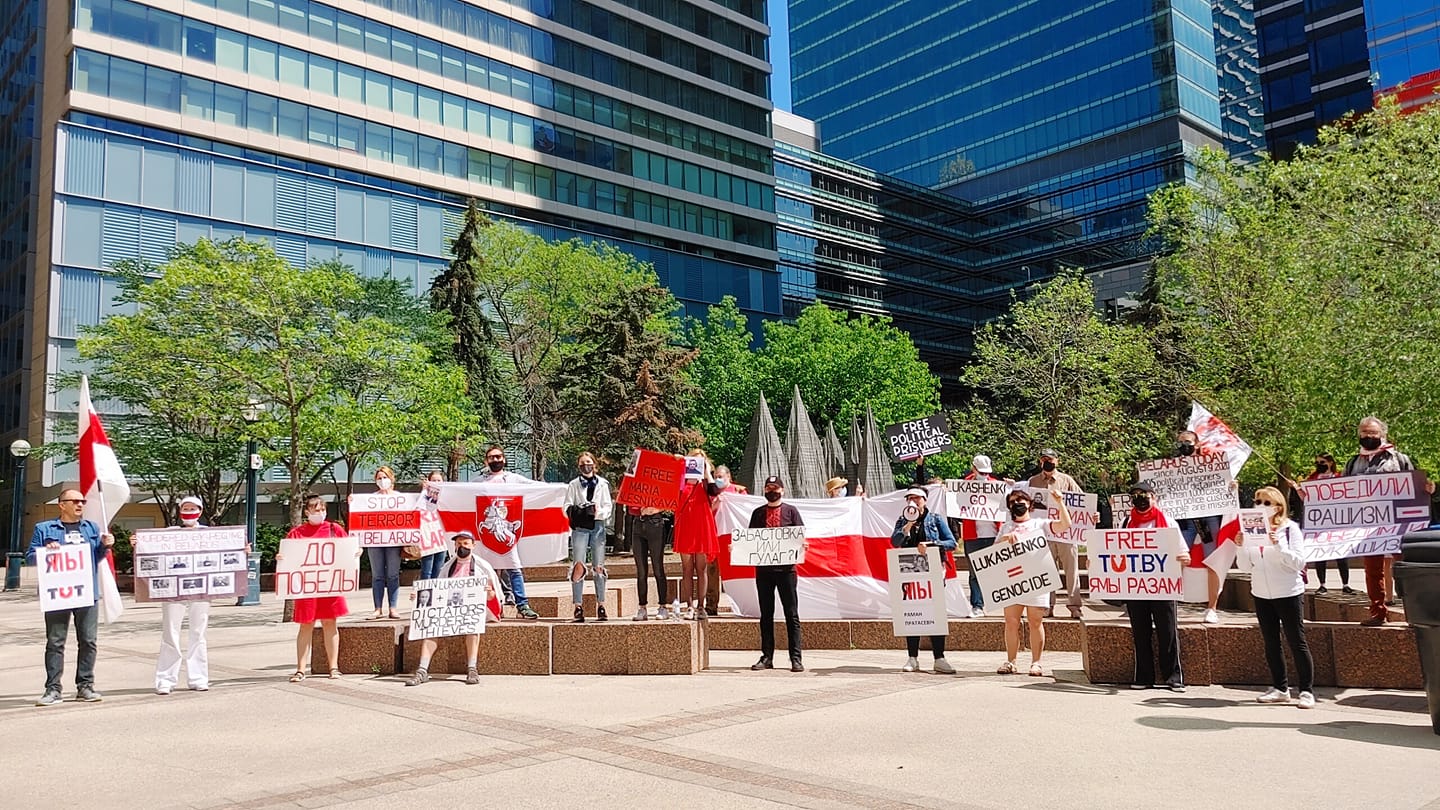 Rally in front of the CBC building in Toronto Photos: Olga Makas

Pratasevich is a co-founder of the Telegram messaging app’s Nexta channel, which Belarus last year declared as extremist after it was used to help organize major protests against Lukashenko. The protests have dwindled in recent months, but Belarus authorities are continuing to crack down on opposition with arrests.

The Irish Ryanair flight from Athens to Vilius, was just two minutes from the Lithuanian border when it was intercepted by a Belarusian MiG-29 fighter jet and forced to land in Minsk due to a fraudulent bomb threat. Lukashenko personally ordered the MiG to intercept the passenger plane, reported the Belarusian state-owned BelTA news agency.

The plane was held for seven hours in Minsk before it was allowed to continue to Minsk minus Pratasevich and his girlfriend, Sofia Sapega, a Russian citizen studying at the European Humanities University in Vilnius.

Also missing were four Russian citizens who did not reboard and fly on to Vilnius, prompting many questions about their role in the hijacking.

“We will find out who are the other four that did not travel with the rest. Lithuania has launched an investigation to find out what really happened on that plane,” said Lithuanian Defense Minister Arvydas Anusauskas.

Demonstrations in support of Pratasevich were held in several Canadian cities including Toronto, Edmonton and Montreal.

Close to 50 people demonstrated in front of CBC headquarters in Toronto, May 24. According to Alena Liavonchanka, president of the Belarusian Canadian Alliance, which organized the rally, the numbers were kept low in order to meet pandemic restrictions.
“At the Belarusian Canadian Alliance, we see what was orchestrated as an emergency landing of a Ryanair plane in Minsk as yet another state attack on the media freedom in Belarus,” she said. “This time around, the attack was implemented through hijacking a plane to arrest a journalist.”

“Such acts of a state and its special forces are deeply troubling, absolutely unacceptable and should never go unpunished… We ask Canada to work with the international community, including NATO partners, to finally respond to the threat posed by the current Belarusian regime with effective measures going beyond the expressions of concern.”
“Raman Pratasevich’s health and life are in great danger right now. “The evidence of torture of political prisoners in Belarus is abundant, and Belarus is the only country in Europe where death penalty remains constitutional. We ask the Canadian media to keep Pratasevich in the spotlight to raise the world’s awareness of the situation in Belarus and facilitate the release of the detained journalist as soon as possible,” added Liavonchanka.
Since August 2020, the Belarusian Canadian Alliance has been calling for the resignation of Alyaksandr Lukashenka, a new election this year, and the release of all political prisoners.

The organization urges Canada and Marc Garneau, Minister of Foreign Affairs, to take immediate actions:
• Demand the immediate release of Roman Protasevich and his safe return to Lithuania.
• Support the full and transparent ICAO investigation.
• Work with NATO, US and EU allies to strengthen the sanctions against the Lukashenka regime targeting the country’s judges, security officials and state-owned enterprises.
• Prevent Canadian carriers from crossing the aerial space of Belarus and issue a travel warning to all Canadian citizens about dangers of boarding other airlines that fly over Belarusian territory.

About 25 people rallied in front of the Strathcona marketplace in Edmonton that same day.
“The majority of Belarusians are shocked with all that has happened,” said Maryna Maskaliova, one of the organizers.

“Our Belarusian community in Edmonton is not big, but it unites active people who dedicate their time to support the opposition movement in Belarus. Many of us immigrated to Canada a long time ago, but our hearts are still with our motherland. All of us have extended families and friends in Belarus. We keep in touch with them constantly. We are deeply concerned with the dramatic confrontation between the regime and Belarusians. Almost every day we receive bad news about new victims and repressions in Belarus. It looks endless… We see there are no limits for Lukashenka’s crimes, and we don’t know what next day could bring. The latest news from Belarus regarding the way how the civil airplane was hijacked shows the nature of this crazy man who has been in power for 27 years. He put hundreds of lives in danger in order to arrest one opposition journalist.

“Lukashenka’s hands are covered with blood. Raman Pratasevich is on the top of his enemy list. We are seriously concerned about his life. Belarusian authorities have already announced that Roman might be sentenced for a long term up to the death penalty. We call on Canada, the European Union and the entire world to stop the dictator, release Raman and all political prisoners,” she added.