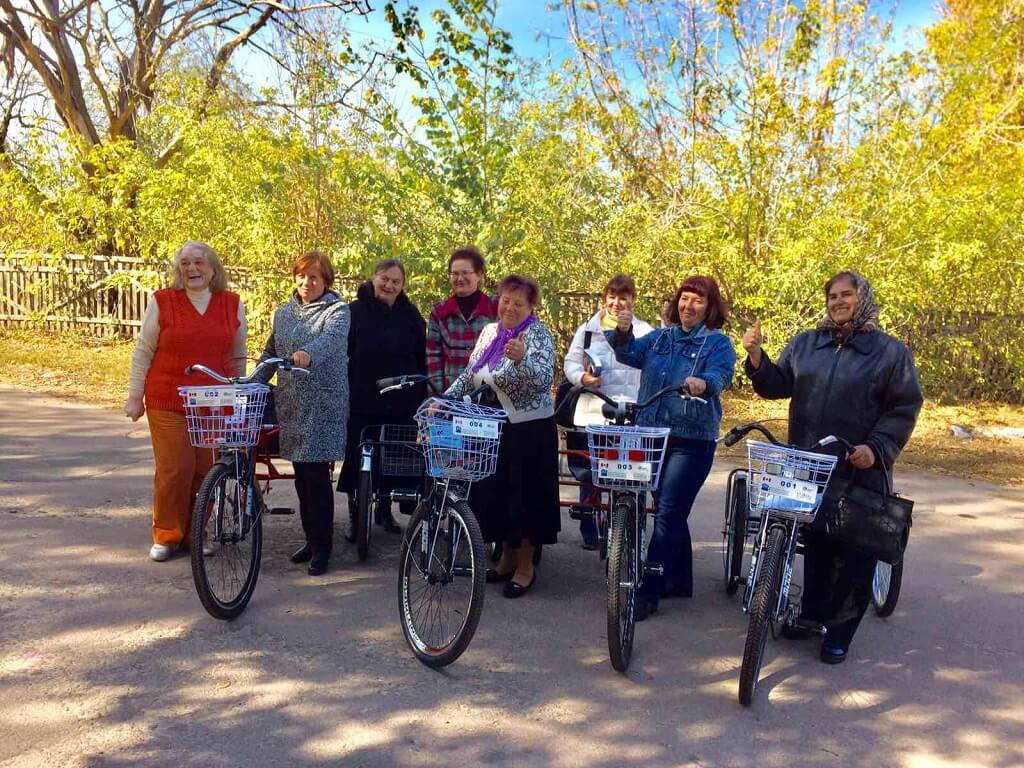 Health and socialization of rural population remain big problems in Ukraine. The National Council of Women of Ukraine’s Health Project, sponsored by Canada-Ukraine Foundation, has addressed these problems by provision of medical assistance and training on usages of medical apparatuses and computers in the rural area in Chernihiv region. The Project has covered ten settlements.

As a result of the Project, ten women volunteer groups (5-10 members each) in villages and small towns in the region have been established, and their members have received information about early diagnostics of non-inflectional disorders (heart attacks, diabetics, oncology, etc.).

Members of volunteer’s groups and volunteers in schools gained knowledge and skills for giving pre-medical and psychological assistance in cases of traumas or life-threatening situations.

The Project has provided hardware for the medics in the area: ten equipped workplaces have been created in the area and volunteers received knowledge on how to operate and use the technique provided for personal growth and communication. Eight villages received two sets of medical apparatuses each.

Thanks to the computers and internet connection, volunteers can now receive professional advice and assistance regarding the provision of medical help to the local population.

In terms of socialization, at least 10% of elder rural women in the pilot settlements have been socialized thanks to computer education provided. Physical, mental and reproductive state of health of rural population in Chernihiv region has improved.

All this experience has been spread to other regions of Ukraine.

Rather skeptical attitude of medics (particularly, family doctors) at the beginning of the Project changed to close support. At their request, the Project made changes to the budget to provide for issuing of ten more placards. Doctors lively discussed the placards subjects and widely use them throughout the whole district.

Besides, a volunteer suspected a case of breast cancer in a village, which has a one bus a week connection to Chernihiv, and made necessary arrangements with the hospital by e-mail via the only computer and Internet connection in the village, provided by the Project. The woman was promptly examined, the diagnosis was confirmed, and she was timely operated.

Actually, all village population has access to the computers and printers provided by the Project for the volunteers. Youth is especially interested in this, therefore a special course for girls 12 to 18 years of age was carried out in six villages. It is important that elderly women are more interested in computer literacy and visit educational courses than men of the same age.

The Project has observed significant increase in volunteers’ self-appraisal. The people who attended Round table #3 were significantly different from those who attended the trainings and previous round tables and who we met in the villages. They were smartly dressed, well spoken and shared their experience. The National Council of Women of Ukraine decorated 16 of them with specially developed decoration ‘Health Volunteer – Heart Call”.

The project benefited 1449 people directly. This is the number of the Health Diaries distributed only on villagers’ requests. The diaries contain a table of health self-estimation, advices on health life, and results of medical examinations. When visiting the family doctor, people come with these diaries.

About 8,000 people benefitted from the Project’s advocacy activities.

The total number of 1449 people who directly benefitted from project activities breaks down as follows:

The Project’s advocacy materials were published twice in a district newspaper, covered on regional TV (two telecasts) and regional radio (one broadcast). Besides, the information was placed in Chernihiv district administration, Chernihiv district hospital, and Division of Public Health of the Health Department of the Region State Administration sites.

Village council heads in the area positively responded to the Project and mentioned considerable socialization of the village population: especial significance was gained by joint conversations on health issues at tea-parties – the Project’s budget provided for food for coffee-breaks and National Council of Women of Ukraine presented an electric tea-pot to each village. The heads also noted decrease of the number of disappointed persons, especially among elder women.

Besides, the Head of Chernihiv District Administration, Andriy Kurdanov, mentioned in his speech that not a single other project had such material (a computer and printer for each village, set of medical devices of home usage for each volunteer) and information (all volunteers and medics of the first medico-sanitary aid have received two textbooks specially written for volunteers, numerous booklets, 2400 placards of 12 kinds) support.

Public recognition of the Project is also evident from demonstration of the video clip (6 minutes) at the 63rd Session of the UN Committee on Women Status as an example of the bridge between family outpatient clinics and small villages population construction.

During the Project, exceedingly difficult transportation problems facing elderly villagers was noticeable. Most widely used village transport, a bicycle, becomes not safe for them, and we learned about traumatization among elderly people who have problems with keeping balance.

Hence, our volunteers, in the first place, and all the rest elderly people need tricycles, which are not produced in Ukraine. Canada-Ukraine Foundation purchased and delivered four tricycles in September 2019 for a pilot test to access the impact of the village roads on the equipment.