On February 9, CBC News reported that it had obtained a recording of a man sources have identified as Iran’s foreign minister acknowledging that the downing of Ukraine International Airlines (UIA) Flight 752 could have been intentional.

On January 8, 2020, Iran fired two Russian-made TOR missiles at the plane just as it took off from Teheran airport, killing all 176 people on board. Of those 176, 138 were connecting in Kyiv to Toronto. This included 57 Canadian citizens. Many of the other 81 were Iranian students studying in Canadian universities, or Iranians who had permanent residency status in Canada, but had not yet obtained citizenship. 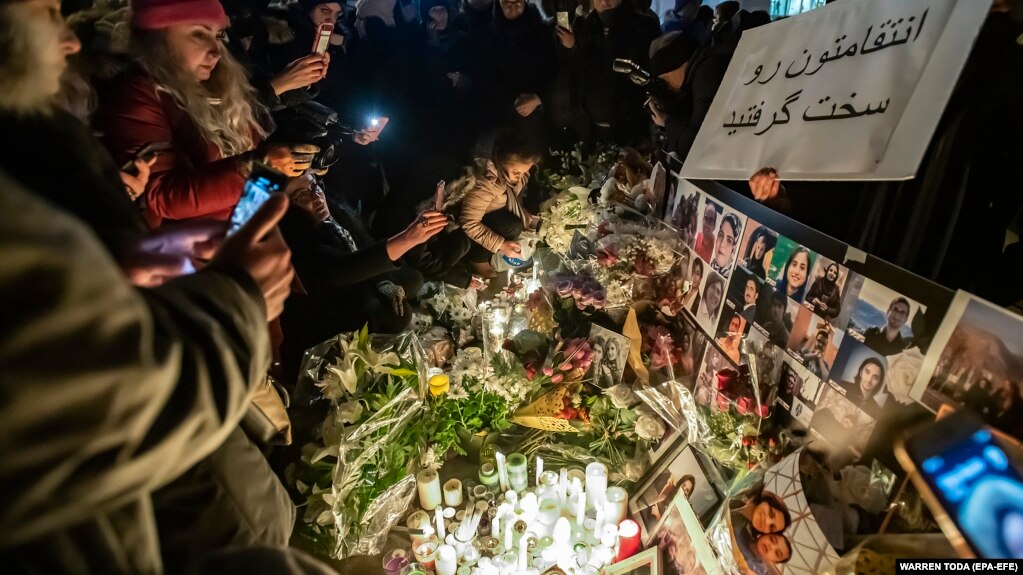 People in Toronto attend a vigil for those killed when Ukraine International Airlines Flight 752 crashed in Iran on January 8, 2020.

The individual on the recording, identified by CBC’s sources as Minister of Foreign Affairs Mohammad Javad Zarif, is heard saying on the recording that there are a “thousand possibilities” to explain the downing of the jet, including a deliberate attack involving two or three “infiltrators” — a scenario he said was “not at all unlikely.”

He is also heard saying the truth will never be revealed by the highest levels of Iran’s government and military.

“There are reasons that they will never be revealed,” he says in Farsi. “They won’t tell us, nor anyone else, because if they do it will open some doors into the defence systems of the country that will not be in the interest of the nation to publicly say.”

The recording is of a private conversation, which took place in the months immediately following the destruction of Flight PS752. CBC had three people translate the recording from Farsi to English to capture nuances in the language.

For its part, Iran denied the existence of such a recording, claiming it was a fake. “The allegations made in this article are incorrect and baseless and many of the statements attributed to Dr. Zarif are fundamentally not compatible with the language that he commonly uses and the claim of the existence of such a tape is not true,” ministry spokesperson Saeed Khatibzadeh said in a statement in Farsi posted on the ministry’s webpage and translated by CBC News.

Although one would expect Iran to deny the existence of such an explosive recording, the fact remains that it has little or no credibility when it comes to this case. Let us remember that at first Iran tried to cover up its actions, claiming the plane had “mechanical problems”. But, as evidence mounted, the country’s military on January 11 admitted the Ukrainian plane was shot down “unintentionally” by an antiaircraft missile.

Ralph Goodale, the prime minister’s special adviser on the Flight PS752 file, said Canada’s forensic examination and assessment team obtained a copy of the recording in November. He added that the audio file contains sensitive information and commenting publicly on its details could put lives at risk.

But not only did the Government of Canada keep the existence of this recording a secret from the public until CBC News broke the story, it also kept it a secret from the Government of Ukraine. Ukraine’s Ambassador to Canada Andriy Shevchenko told CBC News that this is the first time Ukraine has heard about this recording. He added that Ukraine has proposed to Canada several ways the two countries could legally exchange information and evidence about Flight PS752, but they haven’t yet settled on a mechanism. The revelation of this recording shows the two countries need to establish a “legally flawless channel” of communication, he added.

Ambassador Shevchenko has a very good point. Right now, Ukraine, which lost 11 citizens in the crash, is the only country conducting a criminal investigation into the crash. What’s more, Ukraine already has experience in conducting such investigations due to the shootdown of Malaysia Airlines Flight 17 by a Russian missile over the occupied zone of the Donbas on July 17, 2014. The same team that investigated that tragedy is now investigating this one.

The question is why, 13 months after the downing of the plane, there is still no proper mechanism for legal communication between the RCMP and Ukraine’s Prosecutor General’s Office and why Ukraine’s offer to establish a joint investigation team has yet to be answered? Surely the two countries that were most affected by this tragedy and have such a close and special relationship with each other have a mutual interest in cooperating to uncover the truth. Since finding out about this recording from CBC News, Ukraine has also sent Canada a formal MLAT (Mutual Legal Assistance Treaty) request for a copy of the recording.

Ukraine has also received the final report from Iran on its own investigation which was a technical one required by the Chicago Convention on Civil Aviation, and not a criminal one. Given Iran’s past attempts to cover up the truth about the downing of the plane it’s unlikely that this report will shed any additional light on this tragedy. As Shevchenko told CBC News: “I think we should all realize that this report can confirm that the plane was hit by a missile, but it’s not going to tell us who pushed the button.”

While the recording is quite intriguing, it raises more questions than answers. All of which makes it imperative for Canada and Ukraine to cooperate much more closely in order to get to the bottom of this whole affair. And, since Canada is not conducting its own criminal investigation of the tragedy, existing protocols of international legal assistance cannot be fully employed. Therefore, we call upon the Government of Canada to accept Ukraine’s offer to establish a joint investigation team and provide Ukraine with a copy of the recording it has requested. Then, perhaps, we can discover the truth about what really happened on January 8, 2020 or, at least get closer to it.