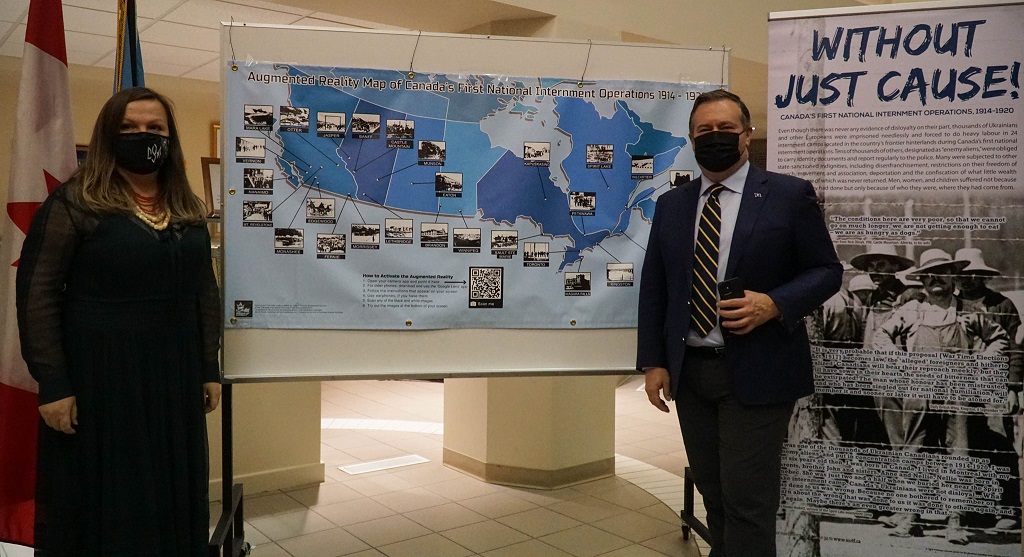 Special guest Alberta Premier Jason Kenney, who, as Multiculturalism Minister in 2008 negotiated the $10 million endowment fund for the Canadian First World War Internment Recognition Fund (CFWWIRF), administered by the Ukrainian Canadian Foundation of Taras Shevchenko, noted that “one of the fascinating aspects of the (First World War) internment measures was how quickly there was an effort to forget.”

“The archives were… widely destroyed just years after the closure of the last camp in 1921. I think that was perhaps a reflection of the national government’s sense that something unjust happened. But so many of the internees, finally returning home, as camps gradually closed between 1918 and 1920, decided that they were going to put the experience in the past, and focus on the future… They had some sense of shame associated with this experience of internment, as though they were somehow guilty. But in fact, these were peaceful, law abiding, loyal subjects, who simply fell on the wrong side of history at the wrong time,” he stated.

“So, thank you for holding up in prayer the memory of the internees, particularly of those who are buried at those camps, who never did come home. May events like this cause us to reflect on the spirit of division and xenophobia, which led to those at that period of terrible injustice. Let’s rededicate ourselves never repeat that kind of scapegoating,” Kenney added.

Alberta Minister of Labour and Immigration Tyler Shandro, whose great-granduncle Andrew Shandro was the first Ukrainian to serve as a Member of the Alberta Legislature, noted that despite internment Ukrainians remained loyal to Canada and helped build Alberta.

“When I was growing up, I didn’t have a clue about this event. Nobody spoke about it in our home. Not my Dido (grandfather), my parents. No one.

“To this day, I don’t know if it was too shameful, too painful, or maybe not important enough to talk about. I kind of doubt that.

“But I’ll never know. It made me frustrated, angry.

“As I learned more about this injustice – our people, our Ukrainian people who sacrificed to come to Canada, the land of freedom, the land of hope, I became even more angry. Why didn’t I hear about it at home? At school? Anywhere?

“The only one thing I knew – as I learned later from my father – was that when my step-grandfather, Harry Levytsky, was released he believed he was owed money from the government. He was told he would have been paid 25-cents a day for his work while he was incarcerated at Castle Mountain. My dad wrote a letter to the Canadian government asking for that money. There was no response. It was never followed up by my Dad. He didn’t persist,” she stated.

Korchinski added that we need to do two things.

“The first is the absolute need for constant education about the injustice of the internment. Education of the public in general. Education in the schools, the universities, neighbours, family, friends, community.

“Especially for the young people.

“The second lesson I have learned from the internment is that of the absolute need to forgive. Not forget. But forgive… We need to be reminded of the lesson of Easter. Jesus forgave us our sins. In the same way, we must forgive those who did wrong to us, as hurt as we are, as angry as we are.”

MC Ulanna Wityk, Vice President of the Calgary Branch of the Ukrainian Canadian Congress, noted that the victims of Canada’s First World War Internment Operations settled in Canada with promises of freedom and land.

“This group was interned without just cause, exploited for their labour and subject to state-sanctioned censures. They worked hard labor projects which included logging and mining. Their wealth was confiscated, while they were paid much less than other labourers of the time.

“Of note, the Parish Priest of St. Stephens Protomartyr Ukrainian Catholic Church, from 1914-1918 — Fr. Mykola Shumsky — was subject to unjust treatment as an immigrant of the Austro-Hungarian empire, and was arrested. Mykola Shumsky was born in Striy, in the Galicia region of present-day western Ukraine. He enrolled in the seminary in Lviv and two years later came to Canada. After graduating from St. Augustine’s seminary in Toronto he was assigned to this Calgary parish — St. Stephens. In September 1915, Fr. Shumsky and two other parishioners were arrested and accused of treason. At his trial, evidence of treason was not found, however it was ruled that Fr. Shumsky must report to the police on a weekly basis. The other two detainees were interned; and the Parish closed for two years,” she said.