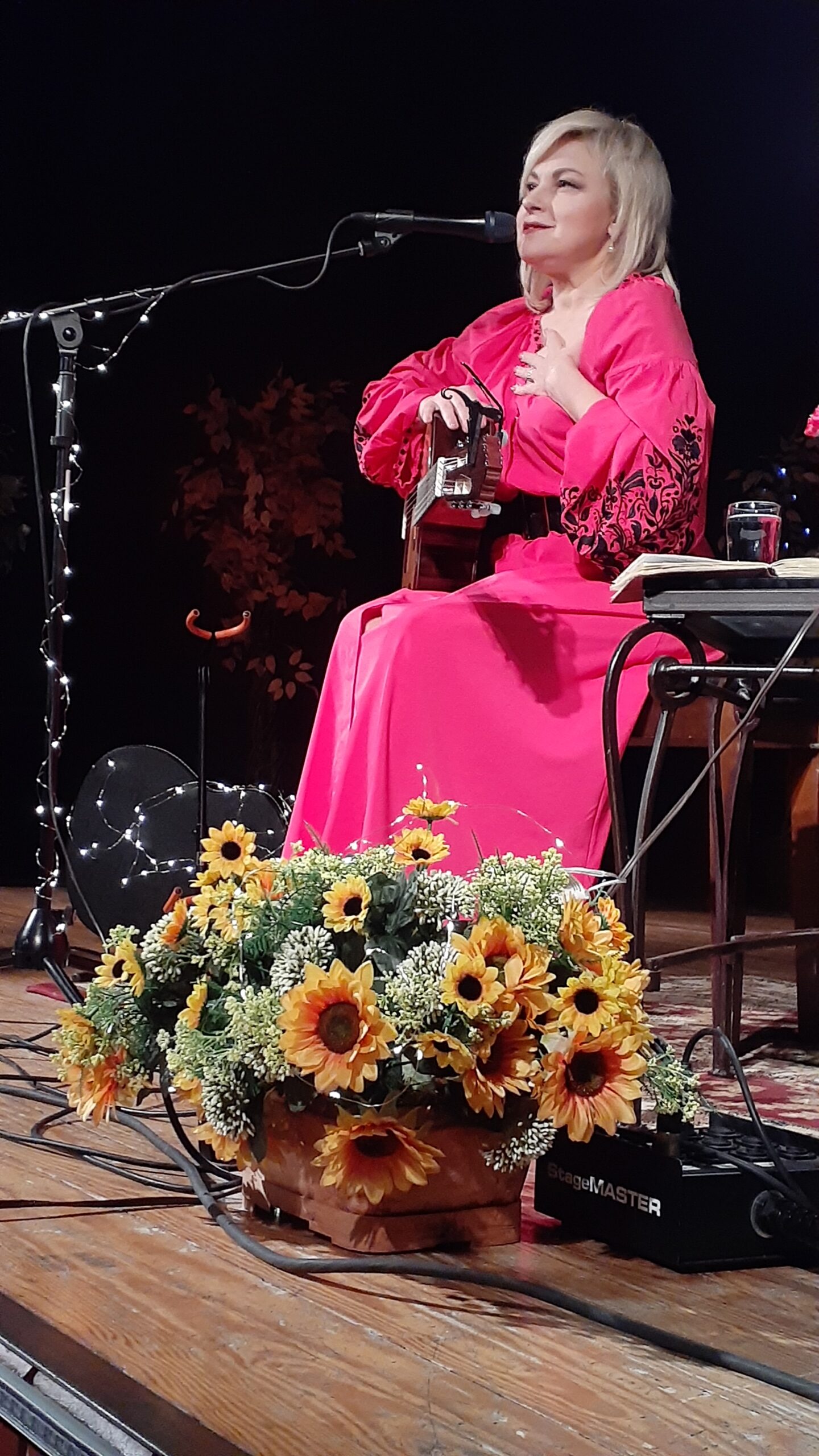 During this time, she performed a concert at the Ukrainian Youth Unity Complex, appeared at the Ukrainian National Federation’s 90th Anniversary Banquet and visited children at St, Martin’s and St. Matthew’s Ukrainian Bilingual Programs and the community-run Ridna Shkola at St. George’s Ukrainian Catholic Parish.

At various points during the concert, Burmaka invited the audience to participate with such numbers as “Ridna maty moya” (My own mother), “Marichka”, “Tsvite teren” (Blackthorn is in blossom), “Chervona ruta” (The red flower) and “Khloptsi pidemo” (Let’s go boys).

Burmaka is possessed of a rich and booming voice which resonated throughout the hall.

Born in Kharkiv, Burmaka still has family and friends in the eastern city which has suffered intense bombardment during the current invasion. It’s very painful for her to see the destruction inflicted upon Kharkiv, but nevertheless the people are resilient.

“Kharkiv lives… concerts take place there, but the city is constantly under bombardment. I just want to say that Kharkiv is a city of heroes. It’s a city that stands, that survives, that fights. That’s why Kharkiv will renew itself and remains my native city,” she told New Pathway – Ukrainian News.

Asked about the role of music in the current struggle, Burmaka said “music inspires, music is the national ethos”, adding that 100 years from now people will remember us by our songs.

Early in her career, Burmaka won several important and All-Ukrainian musical contests or festivals, which quickly made her famous and made her an icon of the Ukrainian music.

In 1989, Burmaka won first place in Lutsk at the Oberih music festival and came second at the famous Chervony Ruta youth music festival in Chernivtsi. In June 1990, she won in Kaniv the All-Ukrainian Festival DZVIN, earning the title of “Laureate”. In 1993, she won the hit-song contest “12-2” organized by the radio platform Promin.

Burmaka has been an active participant in many events in modern Ukrainian history, including the first Chervona Ruta festival (1989), Student Hunger on Granite (1990), “Orange Revolution” (2004) and Revolution of Dignity (2013–2014).

In 1991, she recorded her first CD, Maria, which was produced in Montreal by the Canadian company Yevshan. This became the first Ukrainian-language musical CD to be launched in Ukraine.

In 2005, Burmaka recorded several English versions of her songs, produced new musical clips, and gave several charity concerts in North America. She performed at the largest Ukrainian festival in the US, Verkhovyna, and at the Lemkivska Vatra festival in Poland. In 2011, she gave a joint performance at the festival Soyuzivka.

In the summer and autumn of 2014, as part of the tour “Support Ours”, she gave performances in the ATO zone, in front-line cities. The funds collected from these performances were spent on the needs of the volunteer battalion.