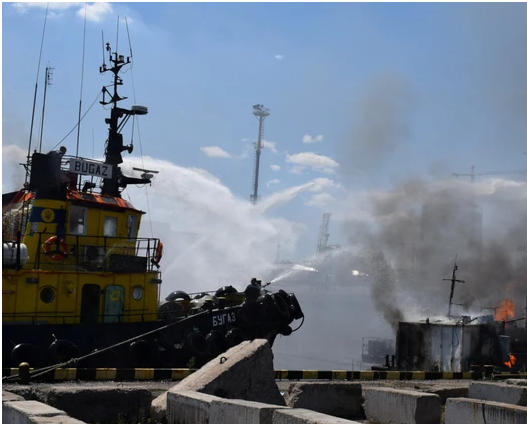 Firefighters work at a site of a Russian missile strike in a sea port of Odesa, Ukraine, on July 23. PHOTO BY PRESS SERVICE OF THE JOINT FORCES OF THE SOUTH DEFENCE/HANDOUT VIA REUTERS

Last week, Russia fired missiles into the Ukrainian sea port of Odesa, just one day after signing a deal that would have allowed Ukraine to export grain through the Black Sea. The attack reinforces how, when it comes to Russian diplomacy, duplicitousness is the norm and no assurances can be trusted.

Ukraine is one of the world’s largest producers of wheat, accounting for nine per cent of global exports. Ukrainian wheat is typically shipped through the Black Sea, but most of the Ukrainian coast is now under Russian occupation and Ukraine’s remaining ports are being blockaded by Russian warships. Ukraine has also mined its ports, protecting it from sea-based invasions at the cost of further isolating it from the world.

Ukraine’s railway infrastructure doesn’t have the capacity to transport the country’s food exports, so wheat is sitting in storage silos while the spectre of starvation looms over tens of millions of people. In occupied territories, Russia has stolen Ukrainian grain at an industrial scale. It remains unclear where this grain ultimately ends up.

According to David Beasley, director of the United Nations World Food Programme, “We are facing hell on earth if we do not respond immediately. The best thing we can do right now is end that damn war in Russia and Ukraine and get the port open in Odesa.”

Restarting Ukraine’s grain exports is critical for global food security, but Russia has been accused of using global hunger to blackmail western countries into either dropping sanctions or pressuring Ukraine to surrender territory. Russia’s obstruction of food supplies can be compared to its strategic cuts to natural gas exports to Europe — militarily weak, Russian President Vladimir Putin seems intent on using cold and hunger to get what he wants.

Russia denies that it is weaponizing food and instead pins the blame on Ukraine. A June 13 Russian state television broadcast argued that, “Ukraine is blocking its grain itself by refusing to demine its ports and by not wanting to use the humanitarian corridors, which Russia has proposed. So what’s the noise all about?”