During the first few years of the Ukrainian Festival in the Bloor West Village, the Information Centre was a very busy place. It provided a wide array of services that new festival attendees could take advantage of.

On one side of the big, white tent, there were many items for sale. Oksana, the manager of the tent, made available hand made, ceramic and wooden Ukrainian items, carefully scrutinized, brought from home, as well as donated items from other donors so that a profit could be made for festival expenses. Hanging from a pole at the top of the tent were new t-shirts and others from previous years with the festival logo and Ukrainian motifs. Beside them were vinochky for adults and children and small flags and buttons were on sale for a dollar. Sometimes, embroidered shirts for children and adults, runners for coffee tables and ceramic vases were available too. There was a veritable trove of Ukrainian treasures in the information booth. Olya Grod, director of the festival would come by in an electric car and say” I ordered three boxes of vinochky from Kyiv for the festival and we need to sell them all to make a profit.” This statement would cause a chain reaction and Oksana, our manager would get after us to sell as much as we could.

On the other side of this tent were photocopies of maps of Ukraine, Ukrainian newspapers, beautiful magazines from Mist, some books and nicely folded programs of the festival events for the three days. Often people would ask for directions and the map on the program would help them find their location. One election year in Ukraine, a representative of the Ukrainian consulate stood behind the front table and answered questions about voting abroad for the President of Ukraine. Occasionally, we would listen to stories from people who had travelled to Ukraine or had family there and we would help them find their ancestral place on a big map borrowed from the consulate.

We inspired young people to find their roots by telling them where they could go to do family research. People travelled from far away places such as Dolphin, Manitoba, Pennsylvania, New Jersey, New York, and Quebec to attend our exciting festival.
Centre were Anna, Dmytro, Oksana and myself. What a motley group of workers we were: retired teachers, students and others. If people were not coming up to our tent, we would stand on the road and greet them, give them a program and try to sell our goods. Anna, Dmytro and I enjoyed competing against each other to see who could sell the most. We would share our sales strategies after listening to each other during a sale.

We met many interesting people and learned so many interesting things! One gentleman explained to me that the Vikings not only settled Rus, Ukraine, but also moved further east over land to Iran opening up new trade routes. Another gentleman looked at the modern day map from the consulate which included Donbas and Luhansk Oblasts as well as the Crimean Peninsula and abruptly stated” “Ukraine was once much bigger.” This of course made me think of all the Ukrainian land and people that had been occupied by Russia and Poland previous to this decade’s occupation. And such was the case of beautiful Peremyshl, a Ukrainian town until after WW2. One young man argued for a while that Peremyshl was still in Ukraine because his father came from a town not far from it and referred to it as Ukrainian. We all need to learn more about Ukrainian history and a fun way to do it is by looking at maps.

This year, the information center will consist of a small table in the parking lot between Ukrainian Social Services and the Medical Building on the corner of Bloor St. and Jane. Volunteers are signing up and tickets are sold out. Only 100 tickets allocated per concert and concerts will go on every two hours with a total of 5 to 6 concerts per day. Covid cannot stop Ukrainians from celebrating their identity. The festival will take place on the third weekend in September. It will be our pleasure to see you at the information center. You can also watch live streaming of the festival program on ukrainianfestival.com and @bwvtuf. 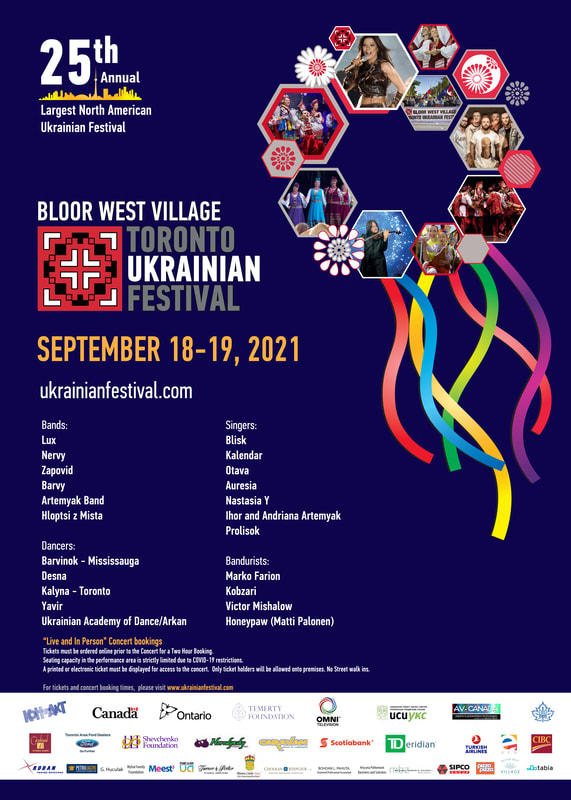