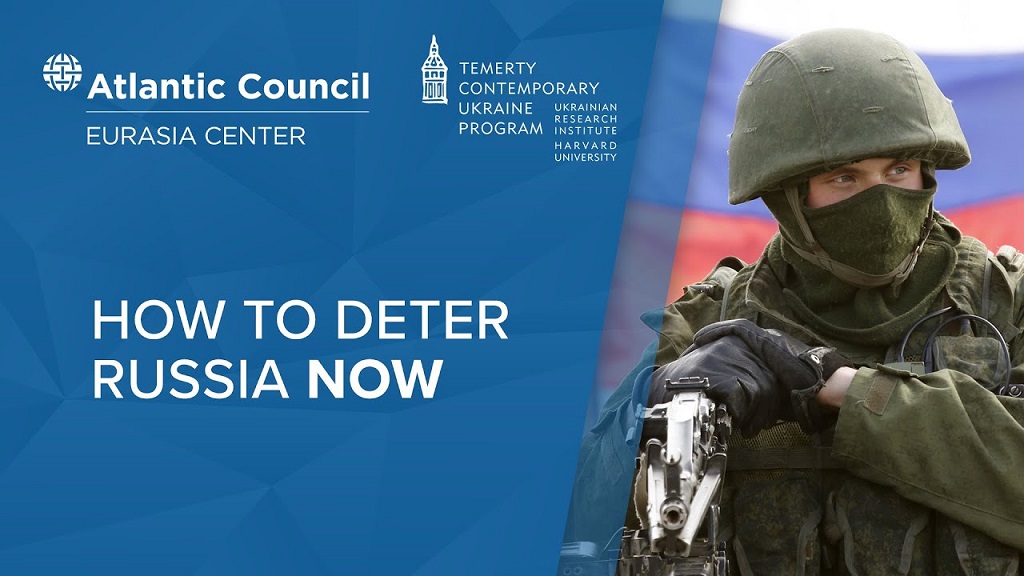 The crisis on Ukraine’s borders has been mounting for over a month – a situation that the Atlantic Council panellists called “a manufactured crisis”.

“We have to remember, first, this crisis is completely contrived. It is manufactured by Putin for a purpose,” Gen. (Ret.) Philip Breedlove, former supreme allied commander Europe, said on December 22 during a discussion hosted by the Atlantic Council on what the West can do to deter another Russian invasion of Ukraine.

“Anybody that tells you they know what Putin is thinking, I would take them with a grain of salt,” Breedlove said.

Breedlove thinks that by sending the troops to Ukraine’s border, Putin has made a huge investment, which he will continue to use until he gets the demands that he has made.

The panellists discussed Putin’s next moves and the possibility of a full-scale invasion, but Andriy Zagorodnyuk, chair of the Centre for Defence Strategies, believes that this scenario is highly unlikely.

“What is a strategic advantage of taking one city or one region?” he said, adding that Putin will have a huge resistance in Ukraine and that the Ukrainian armed forces are ready to apply all their capabilities.

“We did recent statistics polls, which show that a huge number of Ukrainians want to and are ready to participate in either territorial defense or resistance,” Zagorodnyuk said. “Ukraine will be defending itself very, very actively, with lots of losses to Russia.”

“So, you know, unless Putin is completely crazy, he shouldn’t start this scenario,” he said.

If Russia starts a full-scale invasion of Ukraine, Zagorodnyuk said, then there will be a major war in Europe, in which case the whole of Europe will face a substantial economic crisis.

“Russian economy will not be able to withstand that sort of pressure from the world,” Zagorodnyuk said.

Besides, as Gen. Breedlove said, Ukraine has built a competent army over the past five years, which has acquitted itself well in the field. Still, he believes that Ukrainians are not prepared to defend themselves in the air nor on the sea.

“We need to be thinking about how to better organize their air defence. And the same can be said about counter defence, coastal defences and other things to give them some sea control,” Breedlove said.

Besides protecting air and sea, Ambassador John Herbst, senior director of the Atlantic Council’s Eurasia Center, believes that war in the cybersphere is also important since the Kremlin has been provoking the West on cyber since May.

Zagorodnyuk said that any assistance from the West clearly helps, and believes that the West should not be weak in deterring Russia.

“Nothing is going to deter Putin, unless he sees that there is no fear. If we don’t demonstrate the fear, we ask our partners not to demonstrate this here. That’s the only thing which we need,” he said.

Ambassador Alexander Vershbow, the distinguished fellow at the Atlantic Council, added that if the West agrees to talks without any pullback of the troops, it also will be another signal of weakness to the Russians.

Vershbow said that Putin is quite serious in his paranoia about NATO, in that he sees the Alliance as a “number one bogeyman”, the instrument that his main enemy – the United States – is using to undermine the Putin regime at home and deprive Russia of its great power status, which for Putin means a sphere of influence and a free hand to dominate its neighbours.

“Underlying this is Putin’s recognition that if Ukraine does succeed in becoming a stable, prosperous Western democracy, it will ultimately be a dagger pointed at the heart of Russia, the power of its example, sooner or later to undermine the whole Putin regime.” Vershbow said. “For Putin, the stakes are survival.”

Heather Conley, senior vice president for Europe, Eurasia, and the Arctic at the Center for Strategic and International Studies, agreed that weakness from the West is exactly what reinforces Putin’s position.

“Trying to dialogue our way through this, I do not believe Mr. Putin will be satisfied by any of this,” Conley said during the panel.

How can the West get Putin to leave without appeasing him? Conley said, “I don’t believe we can.”

Herbst added that right after the strong response in November, the West began to talk about a virtual Summit, which was “a gift to Putin”. As he said, the game is to show strength, as “we are far stronger than Russia in any category of national power”.

But a filmmaker Bernard-Henri Lévy said that the essential conversation now really must be how to stop Russia from invading Ukraine again.

“My friends, who are on the ground, feel the war,” Lévy said. “And they feel it not as a possibility which can occur in a more or less remote future. They feel it as a reality, which could happen to be true in the very, very, very near future.”

Lévy said that in many ghost cities in eastern Ukraine, there is a whole network of trenches, which is real war at the border of the West, to which the West is blind, but which is a sad, terrible reality.

Lévy said that the West has the moral duty to deter Russia in emergency.

“Why do we have this duty? Because the Ukrainians are our allies, because they have been since 2014,” he said.

“A country that already spilled so much blood for the values of Europe and the values of the West – we have the moral duty to be at her side”, Lévy said.