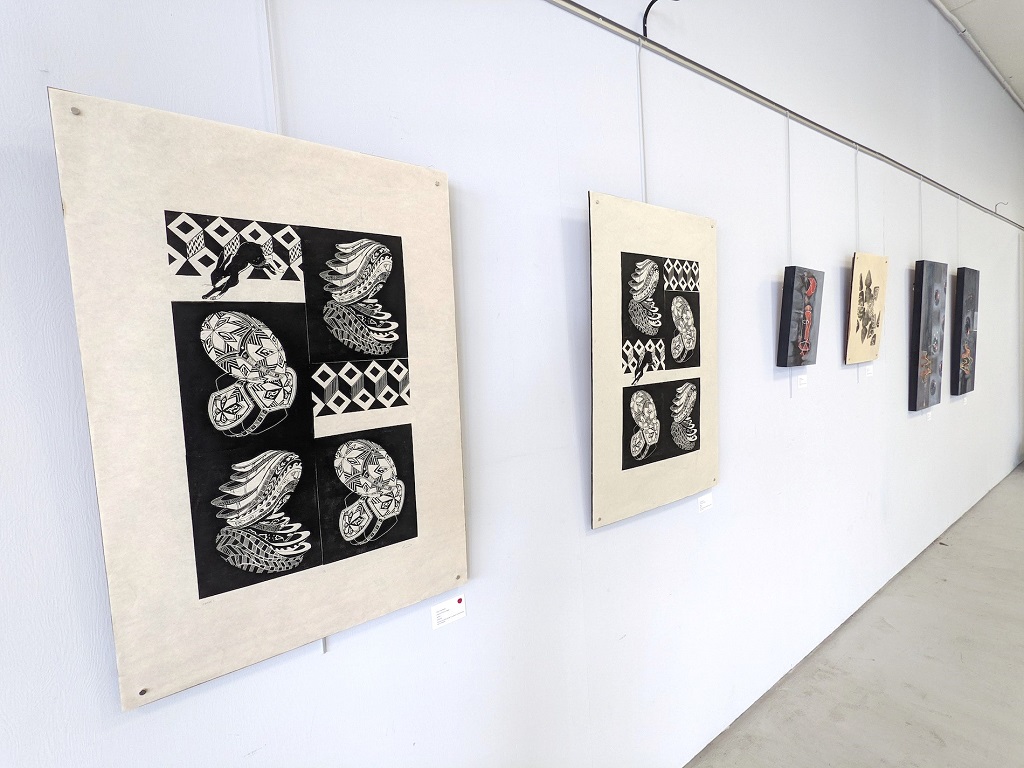 An art exhibition opening was turned into a passionate plea for humanitarian aid for Ukraine in Edmonton, March 4.

“Russia is targeting civilians with bombing, rocket strikes and air attacks all over Ukraine. Russia’s bombing is indiscriminate” she said.

“Russia’s bombing of innocent civilians has already forced over 1 million refugees to flee Ukraine. Russia is committing crimes against humanity on a scale not seen in Europe since the dark days of Hitler and Stalin,” she added.

On that day, March 4 CUF’s Ukraine Humanitarian Appeal announced a further $1,070,000 of aid to be delivered early next week.

The UCC-CUF Ukraine Humanitarian Appeal had already deployed approximately $550,000 CAD to provide food packages, medicine and shelter. The new announcement brought that total to $1.62M CAD. Subsequent tranches of support will follow as we monitor and confirm prior deliveries of support, and assess the evolving needs.

The WHO health cluster estimates that the number of affected people has climbed from 2.9 million a week ago, to almost 20 million today. As a result of this revised estimate, the Ukraine Humanitarian Appeal has increased its target to $25 million.

Luciw-Andryjowycz pointed out that CUF only takes only 10% for administration fees, one of the lowest of any charity.

She added that CUF is working with the United Nations to see what the needs are but is not identifying partners in Ukraine right now for security reasons as it doesn’t want to make them targets for Russian bombing.

There are three ways to donate to the Ukraine Humanitarian Appeal: Go Fund Me, the CUF website (https://www.cufoundation.ca/) or by sending a cheque to: Canada-Ukraine Foundation, 620 Spadina Ave., Suite 200, Toronto, ON M5S 2H4.

Edmonton-Centre MP and Minister of Tourism and Associate Minister of Finance Randy Boissonnault stated the Government of Canada stands with Ukraine and “I can tell you we are working very hard to stop Putin in his tracks.”

All parties in Parliament have put politics aside with the Ukraine issue because “this is about a fight for democracy.”

Artist Larysa Eliuk-Matchak informed the audience about the “Art for Aid” campaign, first launched by community activist and artist, Oleksiy Karpenko together with ACUA to gather funds for the Eastern front war in Ukraine.

“Today, the ART for AID campaign has been launched again as the war continues to terrorize all of Ukraine. Now more than ever, artists around the world are demonstrating through their creativity their determination to bring peace and hope to Ukraine. To date, we have 19 artists participating in the “Art For Aid” campaign,” she said.

Eliuk-Matchak has already started the campaign via @Albertalocal by auctioning off her painting “Sunflowers in Solidarity” which has raised for $275 for the Art for Aid campaign which gets underway March 12th, 2022

The artists are gathering together to donate their work towards a group art exhibit and sale where 100 percent of the proceeds will go towards humanitarian aid in Ukraine via the CUF.

“You wake up and go to the phone to make sure they’re still there.”

She hoped that the war may be over by Easter, but even if it is “there will be lot’s of people coming to Canada and we will have to rebuild Ukraine.”

Playwright Leanna Makuch said that in light of Russia’s attack on and the attempt at the erasure of Ukrainian identity, it is more important than ever to be a Ukrainian artist and to support and take in Ukrainian art.

“Media has its place, Art speaks in a different way than a news article. When i was in Ukraine, researching and developing some of my most recent works, I found that people didn’t want to speak to us when they thought we were media. But when they found out we were artists, they would open up to us in a different way. I believe art can connect through empathy, compassion, and something intangible. So now is the time for artists to take up arms in their own way and carve out our space in this world.

“Art expresses, evokes, and encapsulates emotion, nostalgia, humanity and an intangible human experience. We feel it in our spirits, which is a deeply private, personal experience.”

Makuch said she is writing a play titled Kitka based the true experiences of her friend Alina Viatkina, who is a volunteer combat medic.

“She was just 19 years old when she made her way to the front line of the Battle for the Donetsk airport, and the play explores her time at war and her subsequent experience living with PTSD. We are premiering this play May 26 – June 5 in Edmonton, and both plays have found new resonance and relevance, and has now become very real to me. When the bombing began in Kyiv on February 23, Alina fled Kyiv with her mother and cat, and her boyfriend driving. After three hellish days, which Alina described to me as the worst days of her life, they made it to the Polish border. Before she parted with her boyfriend, they got married so that they could visit each other in hospital if necessary, as he was planning to turn around to go fight in Kyiv.”

Elise Futoransky is an artist living and practising in Edmonton. Her work has sources primarily in painstaking and painting, and the draws on her Eastern European background for inspiration. Her practice often references folk practices and the narrow delineation between art and craft, as well as utilizing religious elements as visual shorthand.

Taras Lachowsky is a Ukrainian Canadian artist living, working, and creating in Guelph. His current body of work is an extension of the examinations begun with the Vytynanka (Ukrainian paper cut-outs) study. It continues the narrative revolving around the post-colonial discussions of belonging and acknowledgement. He is inspired by Vytynanky ideas and techniques, the symbolism of Vyshyvanky (Ukrainian embroideries,) and Pysanky (Ukrainian Easter egg’) pattern, design, and colours.

The evening opened with a rendition of the Ukrainian National Anthem and Prayer for Ukraine by the Ukrainian Male Chorus of Edmonton.