Alexandra Chyczij on the results of UCC XXVII Triennial Congress 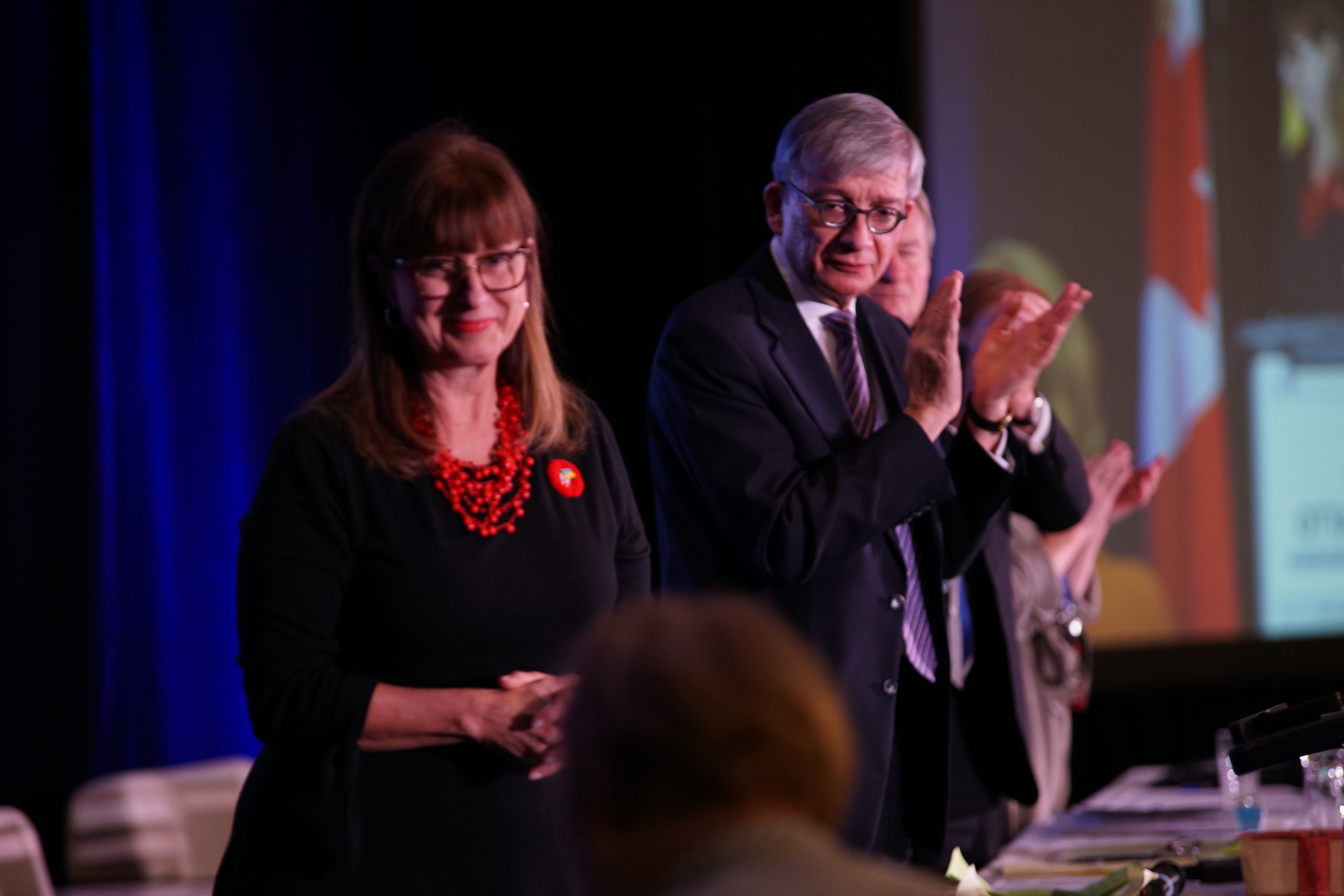 On October 30, right after the final session of UCC’s XXVII Triennial Congress, which adopted the Resolutions, NP-UN spoke to the newly re-elected Ukrainian Canadian Congress National President Alexandra Chyczij. We wanted to get the President’s fresh impressions about the Congress and its results.

NP-UN: Which UCC Resolutions do you consider the most important?

Alexandra Chyczij: The Resolutions addressed many aspects of the work of the Ukrainian Canadian Congress, we will take those resolutions and organize them under the three pillars that we work under. But I think that the most important resolutions are those that relate to support for Ukraine. This work is ongoing, and as many speakers have said during the Congress, that support is dependent on the support of the Diaspora and Western governments and so it is our sacred duty to continue that support in every way that we can.

NP-UN: Based on the discussions at the Congress, where do you think the UCC and the Ukrainian Canadian community as a whole need to step up their efforts in supporting Ukraine?

Alexandra Chyczij: We’ll continue doing what we’ve been doing. I think we’ve been very effective to date in communicating our message to the government. Evidence of that was the participation of the highest levels of the Canadian government in our Congress. We welcomed Prime Minister Justin Trudeau, Deputy Prime Minister Chrystia Freeland, Minister of Defense Anita Anand, and Minister of International Development Harjit Sajjan. This is unprecedented participation by the Government of Canada in the work of our Congress. And that is because they hear us, they understand the importance of the Ukrainian question to the world. And they came here to show their support. Of course, the announcement of the Ukraine Sovereignty Bond was very welcome. Because it is a way that Ukrainian Canadians and all Canadians can participate directly in support of Ukraine. It is a secure financial instrument, people can be sure that the aid is going to Ukraine and that eventually they will achieve a return on that investment.

NP-UN: A lot of speakers had something to say to the Canadian government. What do you think are the main messages and asks from UCC of the government now in terms of supporting Ukraine?

Alexandra Chyczij: Canada is among the leaders of financial support to Ukraine. Of course, military support is important, and while Canada does not have the most robust military, we have had the good fortune of living next to a friendly neighbour and before this war broke out didn’t appreciate the need to have a strong defence system in place. That is changing. There has been a substantial allocation in the budget of Canada to increase Canadian military support and strength. But despite that, Canada has given a considerable amount of military support, close to $650 million. I think one of the most important contributions Canada made was in the training of the Ukrainian Armed Forces, and that’s been ongoing since 2015. The work that operation UNIFIER did in preparing the Ukrainian army for the war is perhaps not yet evident. We see comparisons between Ukraine’s armed forces and Russia’s armed forces, and the Russians operate on the old Soviet system of command. That was a problem that Ukraine understood in 2015 after the defeats at Ilovaisk and Debaltseve. And the Ukrainian government began to address that. We had consultants like Jill Sinclair, working with the Ukrainian Armed Forces to bring them up to NATO standards. And now, Ukraine has catapulted into the NATO world. They are using NATO equipment, systems of command and there’s a joke in Ukraine that yes, Ukraine will join NATO in ten years because that’s how long it will take the West to catch up to Ukraine.

NP-UN: UCC is at the forefront of assistance for the Ukrainian newcomers. What would you say to the wider Ukrainian Canadian community, where should they increase their efforts?

Alexandra Chyczij: I have to say that in the first days of the war I was overwhelmed with phone calls from Canadians, not just Ukrainian Canadians. Every friend I had in school, every professional colleague reached out to offer their assistance. They asked me to tell them how they can help. That’s why we established the Ukraine Humanitarian Appeal, together with the Canada Ukraine Foundation, to provide a vehicle for Canadians to donate to humanitarian aid. Canadians have truly opened their hearts and their homes to Ukrainians. And many communities that held fundraising events for us in the earlier days are calling us again and saying ‘We want to do something else, organize another fundraising event for you because this war isn’t ending’. The most important thing they can do is let our Members of Parliament, our governments know that the support of the Canadian public remains strong, because that is what politicians need to hear. We have done polling by Abacus Data, which shows that the Canadian public support for Ukraine remains strong. But it’s always nicer for a Member of Parliament to receive a telephone call from one of their constituents to reinforce their support.

NP-UN: Where do you see the biggest problems for the Ukrainian newcomers?

Alexandra Chyczij: It’s housing. We have a housing crisis in Canada. We had one before the war started and we continue to have one. Ukrainians never remain unemployed for very long, they immediately found jobs. But our biggest challenge is finding housing. And affordable housing is a real challenge for many Canadians, not just Ukrainians. Short of new construction, I’m not sure what the solution is, but we are in constant communication with all levels of government, federal, provincial, and municipal. And in recent elections across Canada that was a major theme.

NP-UN: At this Congress, several new UCC branches are present. Tell us more about the new UCC members.

Alexandra Chyczij: The influx of Ukrainians in recent months has transformed many small Ukrainian Canadian communities that existed in the past into larger, more vibrant communities. And we brought some of the representatives of those communities here to the Congress, we paid their way because we understand that that was a financial challenge for them. We plan after the Congress to visit those communities and work with them to solidify their organization and enroll them formally as branches of the Ukrainian Canadian Congress. In that we work together with our provincial branches, because we have the pyramid of support. Particularly in Atlantic Canada, the Halifax branch, Prince Edward Island has just recently organized in New Brunswick, in Yukon and, of course, in Newfoundland. The premier of Newfoundland Andrew Furey asked me in the early days of the war, he said, “I have a shrinking population, how can I bring Ukrainians to Newfoundland?” I suggested that he opened an office in Warsaw. He did that and he’s brought two plane loads of Ukrainians to Newfoundland. One of the speakers at our Congress said there was a fight amongst provinces with the federal government over where the first plane was going to land. Everyone wants to welcome Ukrainians and our provincial chapters, our local city chapters have risen to the occasion. In Manitoba, where we are speaking from today, they truly set the gold standard, the support of the provincial government was outstanding. Alberta has been outstanding. Everywhere it has been overwhelming and heartwarming.