A choral Tribute to Ukraine in Edmonton 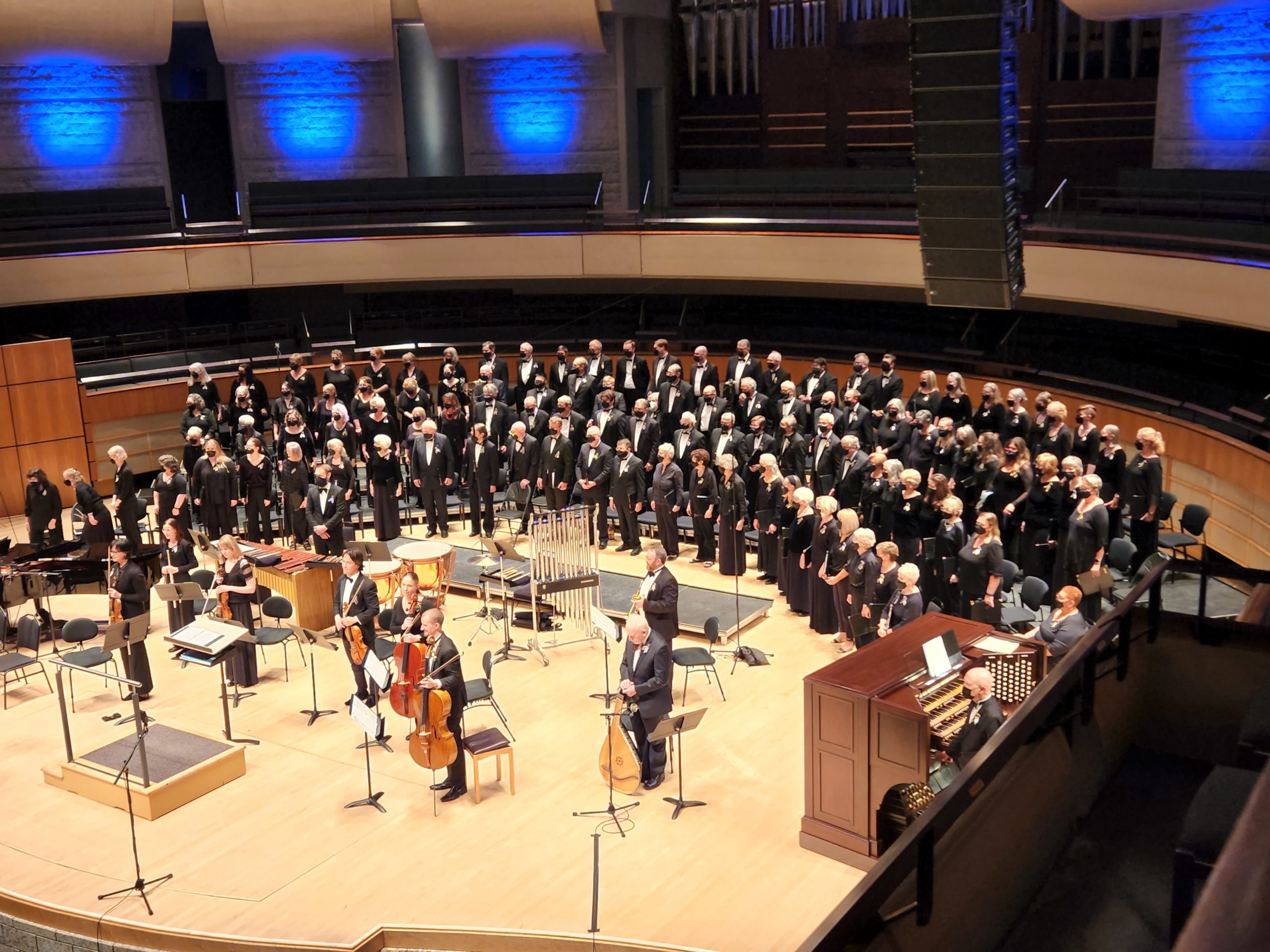 Kappella Kyrie Slavic Chamber Choir and The Richard Eaton Singers combined over 100 voices in a superb choral concert on Sunday, June 19 at the Winspear Centre for Music in Edmonton. With thanks to generous donors including the Francis Winspear Centre itself, 100% of ticket revenue went to support Ukrainian refugees in Edmonton.

The emotional and effective performance was witnessed by Edmonton’s Ukrainian Consulate General along with hundreds of members of both the choral community and the Ukrainian community. The doors were open with free admittance to all Ukrainians who came to the greater Edmonton area fleeing the horrific war in Ukraine. Thanks were extended to the UCC-APC for helping to organize the invitations. The hope was to embrace these Ukrainians and show care and concern for them and all of Ukraine.

The concert was put together by Conductors Leonard Ratzlaff and Melanie Turgeon, who pivoted on previously chosen repertoire, moving away from Russian composer Sergei Rachmaninoff to an array of largely Ukrainian composers in a concert titled “Peace and Reconciliation.”

Both choirs have reputations that bring with them high levels of expectation which were met or even exceeded. The concert commanded a spontaneous standing ovation with the two conductors taking numerous bows when receiving accolades from the grateful audience. The allure of the concert had reached out beyond the usual choral followers, as applause often couldn’t wait for a conductor to lower hands between numbers. The beautiful last chords could never quite ring and fade throughout this amazing hall due to the crowd’s appreciation.

The selection of repertoire was well chosen and the order in which it was performed flowed in a captivating manner not often accomplished in choral concerts.

The Ukrainian choral music, coupled with the classical choral repertoire was exquisite. Composer Hanna Havreylets’ Prayer to the Holy Mother of God was a haunting and plaintive opening. Soloist Namisha Greening had a clear and true sound, and the piece had a chilling end to it.

Works by Mykola Leontovych, Kyrylo Stetsenko, and Dmytro Bortniansky were sung with lovely choral sounds, well-executed tempo changes and nice dynamics, particularly with the use of crescendos. The enunciation achieved in Ukrainian was remarkable, with so many singers unfamiliar with the Ukrainian language and the added COVID challenge of wearing masks throughout. The chant-like solo by Caleb Nelson in “The Beatitudes: In Your Kingdom” was clear, though a darker choice of vowels might have been truer to the language and this genre. Caleb Nelson’s solo in Lesia Dychko’s “It is Truly Right” surprisingly achieved an almost folk-voice call. It was a challenging number that was well-executed by all.

Maksym Berezovsky is not as well known in Canada as many of the other Ukrainian composers. Well received, it is believed that the performance of his “O Clap Your Hands, All Ye People” was the premiere performance of this piece in North America.

In selections from Valeri Kikta’s Oratorio Sacred Dnipro, the humming background was effective for soloist Lesley Dolman spurring a full majestic choral response. Both Lesley Dolman and Jodi Penner must be commended for their beautiful voices and the songs in which they were featured. In Kontakion by Rupert Lang, there was clear diction and delicate handling of the piece by the entire choir, but it was one of the soloists, RJ Chambers, who stood out with his strong, honest and refreshing voice. Exemplary soloists throughout the afternoon also included Graham Fast, Mona Holton, Josiah Maxfield, and Janet Smith.

The majority of the concert was performed acapella, to no surprise. For other numbers, several accomplished instrumental musicians were adding their sound, such as organist Jeremy Spurgeon on the Davis Organ, accompanist Leanne Regehr on the grand piano, Andrei Hornjatkevych briefly on the bandura, with an ensemble of strings, woodwinds, brass and percussion completing the bed of accompaniment when appropriate.

John Ireland’s “Greater Love hath no Man” was a grand piece with riveting chords and a good exchange between the organ and the choir. Britain’s John Rutter, a prolific and current master of choral work composed “A Ukrainian Prayer” in February of this year. This new work, entirely in Ukrainian, was included in this tribute.

The classical choral repertoire was represented with Cantique de Jean Racine by Gabriel Faure which is always a favourite and the warm tones of the cellos were just as they should be. Lass dich nur nichts nicht dauren by Joannes Brahms was a comforting addition. Karl Jenkins’ “Benedictus from The Armed Man: The Mass for Peace” was heart-melting, gentle and true with absolute perfection on the trumpet by Joel Gray. The effect of the tympani declaring a new section of the piece was breathtaking. Johann Sebastian Bach’s Dona Nobis Pacem from the Mass in B Minor was squarely in Len Ratzlaff’s wheelhouse. The musical lines tumbled over each other in precise patterns with celebrated sectional entrances. What can be said, but wonderful and Bravo when treated to Bach by the Richard Eaton Singers and Kappella Kyrie Slavic Chamber Choir.

Congratulations go to all who were involved in putting together this event. In addition to the financial support raised through this concert, in the words of Melanie Turgeon, we hope that the Ukrainian refugees present were truly touched and inspired by hearing their Ukrainian music passionately sung by both Ukrainians and non-Ukrainians. We want them to feel welcomed, embraced and supported by their new community.